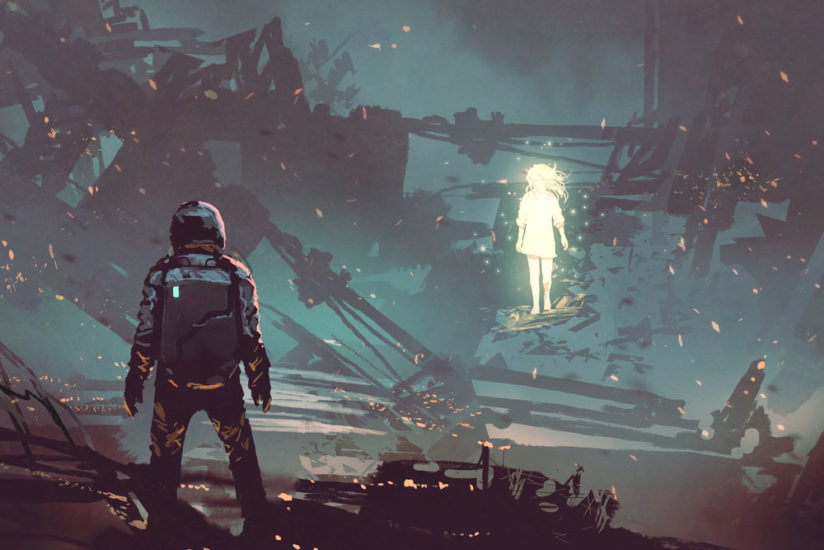 You can give a story structure and movement with just relationship arcs, but adding an external plot makes it so much easier. This is especially true for longer stories, which often run out of believable reasons to keep the characters at odds. This is why even romance novels often throw in an outside threat. But it’s also critical to pick the right external arc. If a relationship is what you’re passionate about, you’ll need an external plot that won’t bore you to tears or sideline that relationship.

When choosing an external arc, ask yourself:

For any external arc that’s supporting a relationship, you’ll want flexible levels of tension. If the tension is set too low, audiences are more likely to get bored. If it’s set too high, the external arc could overpower the interpersonal scenes. As your characters resolve their differences, you’ll want to ramp up the tension and create a nice external climax.

Without further ado, let’s look at seven external plots that are great at supporting relationships.

If you’d like your characters to do lots of socializing, this may be the plot for you. It can work for any setting with a community of people. Your characters might attend high-society events or head out to the nightclub every weekend. They can be at a university, a high school, a convent, a garden club, or wherever you want.

The key is to create a strong reason for this community of people to compete against each other. For a higher-stakes story with lots of tension, you might have an ailing monarch with no heirs. The noble family that forms the best alliance with the strongest support will take the crown, and anyone who opposes them will go to the chopping block. For a lower-stakes story with less tension, perhaps a full-ride scholarship goes to whoever gets first place at the science fair. Then make sure your protagonists need to win. Perhaps they can’t afford college otherwise.

The great thing about intrigue plots is that they can both push characters together or pull them apart depending on the situation. Your characters might form an unlikely alliance to defeat a strong adversary and then find themselves at odds once they near their goal. If whole families are competing rather than just individuals, characters can be compelled by family duty to turn against each other. Alternately, protagonists might be at odds with their family members over the next course of action.

Plenty of relationship stories use a whodunit mystery to add tension and throw the characters together. However, a supernatural puzzle is much more flexible. Instead of using a crime for stakes, you can pick any number of problems: the land could sicken, rooms could be disappearing from the house, everyone could start acting strangely, or the protagonist might discover that some of their memories are missing. The problem could easily get worse as the story continues. That makes it easy to set the tension at the level you want.

Your characters can engage in a variety of clue-finding activities to solve the puzzle. They might question people, break into a magical library, do dangerous science experiments, look for inscriptions in old ruins, sneak onto a spaceship to find out what the enemy knows, or wait under the full moon for a werewolf to appear.

Then, unlike a typical mystery, which has to pull off a twist despite a limited number of characters who could be the culprits, a puzzle can easily go in lots of different directions. Maybe someone nefarious is behind it, maybe the protagonists are caught in an anomaly, or people might be causing magical climate change by accident.

Mysteries are usually better for pushing people together. Just give both of your protagonists an especially strong interest in solving the puzzle and different skills that make it advantageous to work together. However, you can also cast suspicion on one or both of the characters to drive them apart. Perhaps one character is investigating the other, giving them a reason to get close – but not too close.

Traveling offers great opportunities for character interaction. Protagonists have to work together to provide for basic needs like food and shelter, they might have to weather all sorts of environmental threats, and they can interact with different kinds of people with different lifestyles on the road. In one scene they may be stuck alone while they wait out a snowstorm, in another they might be at a crowded pub, and in another they might have to disguise themselves to get past the wall guard.

Travel stories are well suited to light and episodic plots, so you can keep the tension lower and focus more on interpersonal scenes. However, the lower the tension is, the more interesting the setting needs to be to maintain audience interest. You’ll also need a quest to get your characters traveling. Perhaps the protagonists are off to rescue someone they both care about or are going to an ancient temple to beseech the gods.

Quests are better suited to pushing protagonists together than pulling them apart. In fact, it’s hard to give protagonists much physical distance without fracturing the plot. However, you can still create competing interests once they reach their destination. Maybe one of them wants to retrieve a magical item, while the other was secretly sent to destroy it.

In a cat-and-mouse plot, one protagonist is hunting the other. You might have a criminal and a detective, a fugitive and a bounty hunter, a runaway and an authority figure, or a rebel spy and an agent in interior affairs. While these plots are often high stakes, they don’t need to be. Maybe one protagonist is an amateur sleuth and the other is trying to rig a competition. Regardless, your mouse should know they’re being hunted. If the mouse creates their own schemes to outmaneuver the cat, the protagonists will have more interesting interactions.

Protagonists in a cat-and-mouse conflict have a pretty unique relationship. They’ll probably obsess over one another as they try to outwit each other. If they don’t know each other’s identities, they’ll try to discover them. If they do, they may still research each other to better understand their opponent’s strengths and weaknesses.

While the cat and mouse are in conflict, they will have only limited opportunities to interact in person. On the other hand, the interactions they do have will pack a punch. Plus, if they don’t know each other’s identities, they can also interact without knowing that it’s their quarry or hunter they’re interacting with. Scenes like that are lots of fun.

Altogether, cat-and-mouse plots are great at building chemistry despite the fact that the protagonists must keep each other at arm’s length. To bring them together at the end, you can have the cat start to sympathize with the mouse, the mouse learn the harm of their actions, or both. Then either or both of them might turn against their employer to side with the other, creating an exciting final conflict against an outside enemy.

A large joint endeavor will give characters lots to do and plenty of time to interact. Founding or reviving a business or institution works great for this. The protagonists might need to restore the family farm or keep the orphanage from being shut down. Theaters are great fun because the characters can act out roles in stories that are analogous to their current struggles. However, you should choose whatever you are deeply interested in so you’re ready to delve into the details. This is a great time to vicariously live out your fantasy of running a tiny inn for garden gnomes or whatever else sparks joy.

To make sure this project generates tension, it needs to solve a problem that matters. Protagonists could need the money from a business, or an institution could provide an essential service to vulnerable people. It could also be an important part of a protagonist’s heritage, making it personally meaningful. For obstacles and antagonists, add red tape and moneyed interests who object to having the establishment in their backyard or want to buy the land it’s on.

Your protagonists should have a strong interest in the project, but they should differ on how they want to go about it. Maybe one of them has just purchased the establishment and wants to try risky new ideas, while the other has been paid to run the place for a long time and wants to stick to what works. This gives you the opportunity for both juicy conflict and touching scenes of cooperation.

While this type of plot won’t force characters apart, it can create rifts between them. It’s a great match for familial relationships; businesses are often run by families, and the next generation may want to shake things up.

For this one, you need magic in your setting. But as long as you have that, plots based on magical curses can be flexible and delightful.

This flexibility is why magical curses are still a great plotting choice even though they’ve been used in so many romances. Give the curse your own flavor, and your story won’t lack for novelty.

For the curse to provide adequate tension, you’ll need a source of urgency. It might have a deadline after which it becomes permanent, do harm on an ongoing basis, or slowly keep getting worse until it does harm, becomes permanent, or both. You can raise tension for the climax by getting close to the deadline, or, for a more exciting finish, facing off with whoever cast the curse in the first place.

7. Trapped in a Labyrinth

You’ve probably heard of trapping protagonists on an island – or for shorter stories, in an elevator or turbolift. It’s cheesy and clichéd, but with the power of novelty, we can fix that. Instead, pick your favorite speculative fiction environment and make your characters work together to free themselves. They could be trapped in a labyrinth that bends time and space, a spaceship full of alien technology, or a house haunted by their judgmental ancestors.

For lower tension, give the protagonists less urgent survival challenges, such as obtaining food, water, and shelter. A shifting or noisy environment might even make sleeping difficult. Create more exciting conflicts by adding location-specific traps. You can also raise the overall tension by adding monsters or other urgent sources of danger. Then, to win the day, your characters can discover a way out, master the environment by uncovering its secrets, or simply survive until a previously established time, such as daybreak.

Trapping characters together is an old tactic for warming enemies up to each other. First, they’ll start working together, and then they’ll get bored enough to make conversation. If you want to pull them apart, you’ll need to give the environment a special way of doing that, similar to a magical curse. Maybe one protagonist is pulled through a mirror and they have to figure out how to get back to each other.

While an external plot will give you more options for structure and tension, don’t forget that your relationship can do that too. Giving your characters problems to work out will help you make each scene riveting regardless of whether it focuses on banter or action.