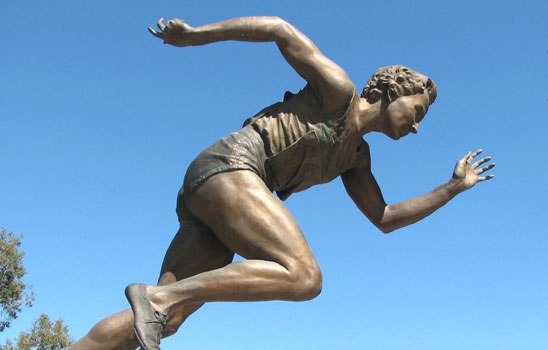 Image by Melburnian used under CC BY 2.5 (Building in back removed)

Many writers weaken the exciting moments of their work with phrasing that resembles dry rambling. If that includes you, what you need is active phrasing. It makes prose tighter and more powerful, and it’s essential for fast-paced scenes. Follow these guidelines to make your sentences more active.

First, look for what’s commonly referred to as a “passive voice.” Passive voice adds an extra “to be” verb to a past participle. This allows the writer to narrate an action while de-emphasizing or removing who is taking the action. While it’s expected in scientific literature, it’s a curse in stories. Hunt down where you’re using passive voice, and make it active.

Instead of: The house had been burnt down by the dragon.

Use: The dragon burnt down the house.

Passive voice is more appropriate if the point of view character doesn’t know who took the action. If your character is examining a crime scene, you might narrate something like this:

The painting had been slashed from top to bottom.

Even though that’s appropriate, the narration will feel stronger if it focuses on the item’s current state, rather than what happened in the past:

The painting was slashed from top to bottom.

Like the passive voice, some sentences use “there are” or a similar phrase to de-emphasize the actor. Unless your point is that something merely exists, these phrases are just dimming the effect of your words.

Instead of: There are many people who will fight.

Use: Many people will fight.

Check whether your sentences contain “as,” “while,” “with,” or a verb ending in “ing.” These can indicate action that is happening simultaneously with another action.

As she raced toward them, she drew her sword.

While/when he closed the briefcase, he cackled to himself.

With a startled cry, they dropped their knife.

Closing the door, she sighed in relief.

Simultaneous actions should be used sparingly during your story and rarely during an action scene. That’s because they soften the action, making it feel less important and less immediate. They also lead to errors. A common mistake is to narrate simultaneous action that’s physically impossible:

Closing the door, she put the bolt in place.

She can’t put the bolt in place while she’s still closing the door.

Instead, put your actions in sequence, and not just any sequence, but the sequence in which they occur. First step 1, then step 2. Cause, then effect. Take this sentence, for instance:

Before he picked the fruit, he checked for ripeness.

That’s grammatically correct, but the immediacy is gone. For a stronger effect, narrate actions in order.

He checked for ripeness and picked the fruit.

Verbs provide the most impact with the fewest words; they will carry your work. When you can, replace flavored nouns, adjectives, or adverbs with verbs that perform the same task.

Instead of: He lifted his lips in a snarl.

Use: He lifted his lips and snarled.

Instead of: The vampire was sparkly.

Use: The vampire sparkled.

Instead of: Mara sunk readily into the chair.

Use: Mara collapsed into the chair.

The right verb makes all the difference. Look for generic sounding verbs and find more memorable replacements. “Walked” could become “shambled,” “ran” could become “raced,” and “laughed” could become “chuckled.” But don’t rely too heavily on your thesaurus. It’s important to understand not only what your replacement means, but what it implies. Misusing a verb will make your work sound silly.

Focus on the Now

When narrating tense scenes, you’ll want to keep your audience on the edge of the action, holding their breath. To do that, use your sentences to tell what is happening now, not what happens in general or what once happened before.

I mentioned a few ways to preserve immediacy earlier, but writers wander away from the moment in another way:

Eris had been to the magic shop once before.

These are exposition sentences. Instead of focusing on the moment, they discussing what’s true in general. Any story will need some exposition. But think ahead, and include the exposition you’ll need before the action starts. If your audience has enough context before your hero plunges into danger, then once their life is threatened you won’t have to ruin the moment by explaining who the bad guy is.

Use Only the Words You Need

The more you shorten a sentence, the more effective the remaining words will be. Nothing will weaken your prose more than flooding it with meaningless words.

Instead of: He used the near exact amount of pitch he needed to blacken his skin.

Use: He used pitch to blacken his skin.

That doesn’t mean you’ll never want elaborate phrasing. But every word must add something, and when the tension is high, you’ll want shorter sentences.

When you need your sentence to pack a punch, make it only a few words long; then contrast it with its surroundings:

They conducted their deception calmly, confident that Mara would spiral into dysfunctional panic once she learned the key was missing. She didn’t.

Short sentences like this can also provoke curiosity, providing a stronger hook. In this example, what did she do instead of panicking? The tiny sentence doesn’t tell us.

Examine your content, and decide how much tension and emphasis it needs. When the meaning is subtle and the actions trivial, you can reduce active phrasing. But when your content is powerful, match it with powerful prose.

Comments on Renovate Your Sentences With Active Phrasing