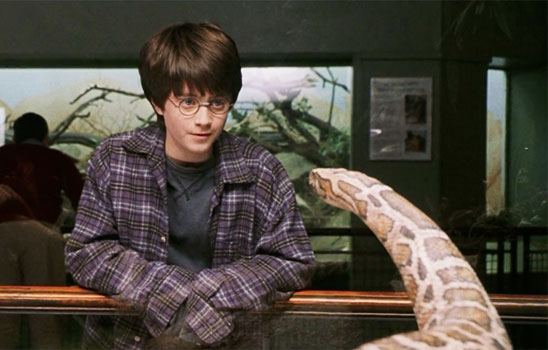 Harry Potter gets his first glimpse of magic when he sets a snake free at a zoo.

My story is an urban fiction one where the main character believes that magic and fairies are only mythical creations. Then one day she is told that she is one of few people who do in fact have inhuman abilities (this is grossly oversimplified for your purposes). Obviously, this is hard to believe at first, yet the story must continue now and especially so because of this knowledge. How do I believably come to get my character to realize this new reality she has been thrown into? And while this is a different but related question altogether, how does she come to know and fully understand the aspects of this reality, such as the laws of magic and the anatomy of it? Sorry! I know this is a lot, but I am having trouble with this part of my story!

The transition Emma describes is an integral part of the hero’s journey; the hero leaves the familiarity of the ordinary world and enters a new one. The hero must then learn the rules of this new world before they will be ready to fight the Shadow.

So how is it done in an urban fantasy like Emma’s? Let’s step through it.

How do you get a skeptic to believe in magic? Simple: they have to see it for themselves. Other people can tell them before or after, but their own experience will be the critical turning point.

Consider making your magical antagonist strike first. This will not only introduce the hero to magic but also set up the story’s conflict, hooking your audience. The hero could witness the antagonist stepping right through the walls to steal a family heirloom, injure the hero’s friend with a lightning bolt, or descend from the sky to snatch the hero herself, then attempt to fly away with her.

After this encounter, it should be obvious that if the hero continues to dismiss magic, bad things will happen. Perhaps the flying creature leaves the hero with a strange glowing mark on her arm, one that slowly expands until she’s driven to find an answer.

While this first encounter is the most critical, in many stories it’s appropriate to insert some foreshadowing beforehand. You could prep the hero for the plunge by giving her portentous dreams or by having a series of strangers walk up to her and tell her that her time is at hand. She’ll outwardly dismiss these signs as nonsense, but inside, her skepticism will waver.

If you want someone close to her to tell her the truth, and then have her reject it, you can also make that work. Consider this sample sequence of events:

If you need your hero to believe in magic without experiencing it firsthand, she must want it to exist. Then she might play along, even though she only half believes it. Her outlook on magic and the magical world should still change after her first real encounter. She’ll realize it isn’t all fun and games.

As soon as your hero has seen something she can’t deny, she’s entered the magical realm. The magical realm is dangerous, and doubly dangerous to anyone ignorant of its rules. She must get up to speed quick, and for that she’ll need a mentor.

Mentors come in all shapes and sizes. They can be any character that:

Stereotypical fantasy mentors are wise old wizards like Merlin, Dumbledore, and Gandalf, but the hero’s mentor could be a small talking cat, a homeless youth, or a mercenary who’s paid to help. If someone in your story tells the hero she has special powers, that person is almost certainly a mentor.

Once the hero and the mentor are united in purpose, the mentor explains the new realm and its rules to the hero. It’s about that simple. I wouldn’t let the mentor drone on for several pages; break it up and mix it with action, but some straightforward telling via dialogue is generally in order. It’s not just the hero that wants to know how magic works; the audience wants to know, too.

The mentor may have duties beyond explaining. They could provide:

While almost every hero’s journey has a mentor of some kind, their role doesn’t have to be large. The mentor might not know much themselves. After they fill the hero in, it could be up to her to figure out the rest. She might learn to use her power through practice and experimentation. She could face the same adversary several times, failing each encounter, until she finally learns how to use her powers.

Once the hero has gained her footing in the magical realm, it’s time for the mentor to disappear. In many stories the mentor disappears by dying, but that’s overdone. The mentor could be captured, run off to handle what they think is a more important mission, or even cast the hero away. The point is that the hero can no longer rely on the mentor to help her solve problems. It’s time for her to prove herself.

That means you have to give the hero a great challenge, one that will require her to use everything she’s learned. Perhaps it’s time to face the antagonist that tried to fly off with her in the beginning. Regardless of the foe, it should demonstrate how she’s grown in skill and wisdom. Once the challenge is complete, she has officially mastered the magical realm.

Comments on Pulling Your Hero Into the Magical Realm