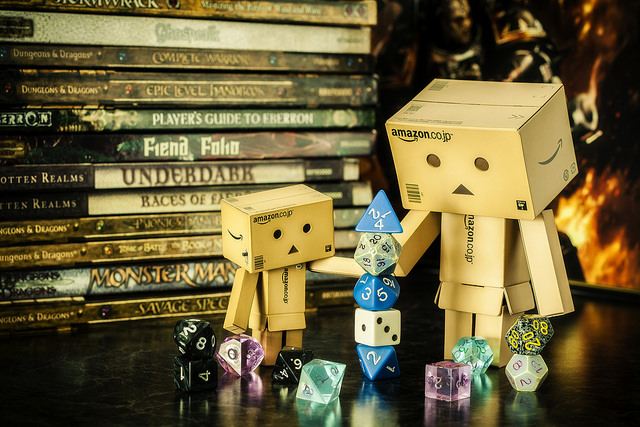 This is part 1 in the series: Running a Large Campaign

Creating a large, year-long campaign is an ambitious project to undertake. When done well, the payoff is spectacular, and everyone involved will talk about it for years. However, it definitely requires a lot of planning. If you’re not careful, you can spend more time planning your masterpiece than playing it!

But don’t despair; there are ways to efficiently run a campaign of massive scope. Through this series, we’ll explore what goes into running a large campaign, so that you can be confident you haven’t missed anything.

The first decision you need to make before running a campaign is what game system to use. You may already know which system you want – the same one your group always uses! But it’s still useful to think about the strengths and weaknesses of the system. You might just find that something new fits your story better.

The rules of roleplaying systems fall along a spectrum from simulation to game. It’s also often referred to as the “crunchy” scale. Crunchier games are good for a group that enjoys small details and high complexity, while groups that prefer abstractions and simplified conflict rules lean toward less crunchy systems.

Two of the crunchiest games out there are Dungeons and Dragons 3.5 and Burning Wheel. They both have many layers of rules that inflate the value of system mastery. This makes it difficult for new players to learn the game without hours of reading, or having another player help them for a few sessions. Warhammer 40K Roleplay also deserves an honorable mention here, but it’s so setting specific that it can be difficult to adapt for more general use.

At the other end of the spectrum is Dungeons and Dragons 4th Edition and Star Wars: Edge of Empire. The rules are heavily segregated or abstracted, reducing synergy, but also cutting down on complexity.

While you shouldn’t worry yet about the specific plot points of your campaign, it’s good to know what challenges you want for your players. Most roleplaying games have a robust rule set for individual character combat. However, there are many other encounter types to consider:

For some systems, all rule complexity is in the combat rules, and social encounters are simplified down to a single skill check. Whenever your party needs to get someone to do what they want, they’ll lie, coerce, or negotiate – depending on which skills they selected. However, if you think that your campaign will have any emphasis on intrigue, you should use a game system that actually supports it.

Mouse Guard has a set of challenge rules that are consistent across encounter types. They become quite abstract at times, but it’s pretty easy for new players to understand a feint or defensive technique in the context of social combat. The Mouse Guard system also has an emphasis on mechanics that give rewards for roleplaying choices. This is a rules philosophy that can add a lot to an intrigue heavy game.

A Song of Ice and Fire has a social combat system that parallels the core mechanics of its physical combat. While its rules have greater complexity and a higher learning curve than Mouse Guard, they are much less abstract. The system also allows social conflicts to end when the participants find a compromise, or when someone gets angry and draws a weapon. This sets it apart from games that require the scene to play out until it reaches its conclusion via the mechanics.

The D&D 4E skill challenge system is also used for social combat. Skill challenges can be a lot of fun, and are easy to learn and implement in other systems. But if you want a set of rules for social encounters in particular, 4E probably isn’t what you’re looking for.

Robust mass combat systems can be hard to find. Most systems suggest using large battles as a narrative device for the party’s smaller scale conflicts. In these systems, you can use heroes for reconnaissance missions, sabotage, or capturing key points that turn the tide.

However, if you want your game to feature strategy and massed armies, Burning Empires and ASoIaF both have thorough rule systems for mass combat. If your players want their strategic decisions to carry risk and reward, these might be just what you’re looking for.

Most of the systems I’ve mentioned so far have been for fantasy settings. But deadly and exciting starship combat is a compelling reason to run a scifi campaign.

Star Wars Saga Edition has one of the strongest vehicle and starship combat systems you will find. The system is well balanced for both small scale PC combat and large set piece battles. Burning Empires is also a good system for starship combat, though it is more limited to the mass combat side. Unlike Warhammer 40K Roleplay, the Saga system can be modded for more generic science fiction campaigns pretty easily, and you can use the starship rules on their own if you need to supplement another system.

The number of things to consider can be overwhelming. As a result, GMs often just use whichever system they’re familiar with. But if you’re about to start a new campaign, then it’s a good time to look for a better system. You could discover a perfect fit for the kind of game you want to run.

Form a Group That Meets Regularly

Of course, the one component that is most important to a campaign is the group of people you’re playing with. Without them, you can’t have a game. If you’re planning on a long running campaign with a coherent plot, you’ll want a group that can meet consistently. When asking people to join, tell them upfront that you will be running the same game every or every other week, for however many months you expect it to last.

Getting a commitment from your players will help to make the experience better for everyone involved. While it might seem like a big commitment to ask from them, consider how much more time you’ll be investing in the campaign! It’s definitely okay to ask players to meet regularly, not just for you, but for everyone in the group. That regularity has a large number of benefits:

Keep things simple while you’re first conceptualizing your campaign. There is a lot of work that goes into planning a large game, but you don’t want to get bogged down in that too early. Get your group playing the game before you start long term planning. Without the external motivation of your group, it can be easy to retire the whole project if you hit a mental block or run out of steam. Instead, keep everything small and flexible in the beginning. This way, you’ll have a solid foundation to build on for your larger plans.

Pick a Region of the World

Rather than developing an entire world to set your game in right away, start by planning a few adventures within a small region of the world you’ll eventually use. This works both if you’re building your own setting or working with existing world materials. If you choose Eberron, for example, then you can focus on just one of its kingdoms, and worry about learning about all the others later.

Once you’ve played a few sessions in that region, you can evaluate if it is still right for the larger campaign that you want to run. If it’s suitable, you can expand from that region by using it as the jumping off point for your plot. If not, you can always take your players elsewhere. World continuity can be preserved just by keeping references to former places.

There are plenty of terrible game mechanics that groups have to work around, even in good systems. And there are also a lot of resources online for house ruling poorly written rules. However, every time you add in house rules, you’re increasing the game’s complexity. New rules, often in direct contradiction to published materials, can make it confusing for both you and your players. This can be especially difficult for new players that are learning the system from scratch.

Since you’re planning on running a long campaign, you have the luxury of adding house rules slowly. Introduce them later to smooth out problems you’ve noticed during play. If your players think the published rules are fine the way they are, you can use those problems to get their buy in. And that way, if the issue never comes up in the game, no one has wasted time learning an extra house rule.

The right props or reminder cards can be helpful when running a game, but you won’t know what you really need until you start playing. Avoid bogging down your planning sessions and your play area. Don’t front load too many resources for your campaign.

Instead, preserve your time and money by waiting until you learn your game mastering style. Start with just your rulebook and planning notebook or computer. After a few sessions, you’ll start to have a better sense of what you want and need, and then you can buy or create the resources that are the best fit for you.

Now that you’ve picked out a rule system, a setting, and a group to play your campaign, it’s time to start putting together plots, villains, and epic twists, right? Wrong. Well, not so much wrong in the sense of “don’t do it” as wrong in the sense of “don’t make it your top priority.” With the basics settled on and a group that’s ready to play, you don’t want to put everything on hold while you retreat to your cave to write an epic campaign. You’ve put a lot of time and effort into planning and recruiting people, so jump in now, when everyone’s enthusiasm is still high, and start playing.

Why Mouse Guard Handles Failure Better Than Any Other RPG

Episode 34: The Fight Over Combat Mechanics