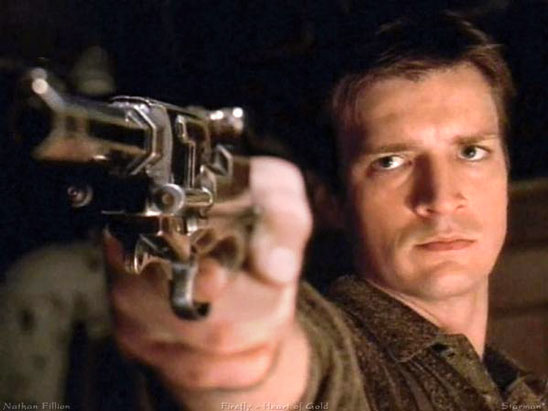 If you like to plan your stories ahead, you’ve almost certainly sketched out your plot. But have you planned your character arcs? Every story needs a character arc for its protagonist, even if it’s simple or subtly conveyed. And while supporting characters don’t always need an arc, stories are better off when they’re included.

Luckily, characters arcs work very much like any other plot strand you might be working on. The difference is that they focus on inner events rather than external ones, which can make them harder to wrap your head around. If you have a character that needs an arc and you’re not sure how to add one, these steps will get you started.

Spoiler Warnings: Stardust and Serenity. You can avoid spoilers by skipping the bulleted sections.

Start your character arc by showing your audience a character need or problem. During the course of the arc, you’ll solve this issue. Often it’s a sore point stemming from events in the character’s past, but it can also be created by an unfortunate incident at the beginning of your story. Whatever it is, it should be deeply personal in nature. It’s about how they feel, not whether they have a pair of socks that match or an umbrella to shield them from the rain.

If you want to stick to a simple arc that requires minimal character development, I recommend using an unfulfilled desire. Your character could long for freedom, knowledge, or glory. Characters like these are usually eager to go on an adventure to satisfy their longing.

If you want to put more focus on the character development in your story, I recommend a deeper issue of disillusionment or fear. Common ones include a disillusionment with parents, a fear of failure, or a fear of rejection. Don’t spell this out for your audience. Instead, show them the symptom: a coping mechanism that causes your character to act out. This might be reluctance to introduce their parents to others, severe risk avoidance, or keeping people at arms’ length. Characters of this type are generally reluctant heroes; their bad behavior is how they avoid their problem instead of facing it.

These two problem types can be combined to great effect. Your character might fear rejection, causing them to avoid people, and then fixate on obtaining an expensive AI to relieve their loneliness. They are no longer reluctant, just misguided.

Unless the problem for your character arc was created at the beginning of your story, there is a reason why your character hasn’t already solved their issue. Some aspect of the status quo has stifled them. Now you need to interrupt that status quo, throwing everything into the air. This change shouldn’t hand your character what they want on a silver platter, but it should provide an opportunity that wasn’t there before. After the change, character growth is possible.

If you already have a plot for your story, look through your notes. The big change should be near the end of Act I, or, if you’re using the Hero’s Journey as your plot structure, it could be anywhere from the Call to Adventure to the Crossing of the First Threshold.

If you have a reluctant hero with a coping mechanism, the change should render this coping mechanism useless. This won’t feel like an opportunity for your character – it will feel like their worst nightmare. But it will force them to start facing their fear or disillusionment and grow as a person.

Now create some baby steps for them to get to this goal. In a shorter work, I recommend three steps forward – like the three spirits that appear to Scrooge in the Christmas Carol. If you have a longer story, you’ll want more steps, and some of them should take the character backward instead of forward. This will add tension and conflict.

Each step should challenge the hero by taking them out of their comfort zone just a bit, or by testing their commitment to achieving their dreams.

Last, Test and Reward Them

By now your character should have made great gains toward their goal. Sometime around the climax of your plot, you’ll need to test whether they’ve really learned their lesson, or are truly devoted to achieving their dream. It’s all or nothing. Either they pass with flying colors, or they fail miserably, becoming a tragic hero.

Often, passing the test requires some sacrifice from the hero. Making this sacrifice proves to the audience that they have changed forever. If you have a misguided character, it’s at this point that what they were seeking is freely offered to them. Their sacrifice is to give that item up.

After your character has taken this final test and your story is coming to a close, it’s time to demonstrate the consequences to the character. If you have a tragic character that failed their test, they should be punished for it during the climax, possibly by dying. If they succeeded, their new-found commitment, strength, or enlightenment should bring them great rewards. You can make a reward scene especially strong by building parallels with the beginning of your story. Show them sailing through circumstances they once struggled with.

Tests and Rewards in Action:

More than anything, character arcs give a story its meaning. Your audience probably hasn’t taken any trips to the fairy realm, but most have probably struggled with finding faith in themselves, faith in the world, or achieving their dreams. By thinking through the progression of your characters, you are building a connection between your story and the hearts of your readers.