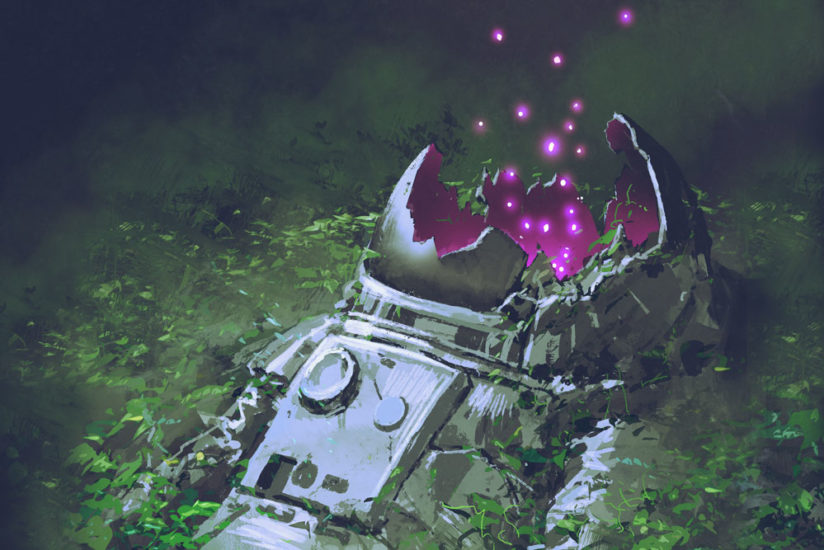 Image by Tithi Laudthong on Shutterstock

In many circles, people use the term “original” as though it’s synonymous with value. If a story is original, it’s highly valuable, whereas if it’s “derivative,” it’s trash. Critics of all stripes wield these reductive labels to validate or dismiss stories without bothering to defend their opinion.

While it’s true that “originality” can make a work better, it’s loaded with baggage, and we have a more accurate word for what it offers audiences: novelty. Here’s why originality should be left to rot so novelty can take its place.

The Quest for Originality Sabotages Storytellers

Put together, this misplaced emphasis puts storytellers in desperate pursuit of “an original idea.” But this is not something they should be doing.

There are almost eight billion people on the planet today. At this point, just about every idea has been done through sheer coincidence, and it’s only going to get worse as time passes. Writing is tough enough without asking people to meet standards that are practically impossible.

In pursuit of original ideas, writers constantly beat themselves up and discontinue perfectly good stories just because they realized someone, somewhere, has already done it. Similarly, many writers are so afraid of the “derivative” label that they treat ideas as less unique than they are. I shouldn’t have to tell people that a character isn’t a clone of Han Solo merely because they are also a swashbuckler.

The emphasis on a story’s ideas rather than their execution is also dreadfully misplaced. While interesting ideas will help a story, they’re the quick and fun part. The real work of storytelling is fitting all the fun ideas smoothly together and bringing them to life. Because of this dynamic, the value of a story is about 1% idea and 99% implementation. A storyteller who gets stuck searching for the perfect idea will never do the work that’s actually important.

Just as unfortunate, a storyteller might latch onto an idea they feel is original and then discover why their idea has been lightly used. It could lead to a story that’s unpleasant for audiences or make plotting into a nightmare. If the execution of such ideas isn’t impressive, the story will crash and burn. However, critics may still praise it merely because it’s different, thereby giving storytellers a perverse incentive to sabotage their work. This is one of the dynamics at play with tragedies, which are disproportionately praised in comparison to their appeal.

Not only does originality place too much value on the ideas themselves, but it also perpetuates the assumption that the ideas we generate are more unique than they are. Without that, critics would have to admit that true originality is infeasible and stop placing so much emphasis on it.

Writers often buy into these falsehoods and become possessive about their ideas. They can be afraid to share their work – sometimes even with professionals who could help them – because they think someone might steal their premise and profit from it. Then there’s the occasional clueless person who tries to trade their ideas to a writer in exchange for royalties on the resulting book. While they’re usually laughed out of town, they shouldn’t be showing up in the first place.

Worse, when writers run into another story with uncanny similarities in ideas, such as the characters, plot, or premise, they often assume it was plagiarized. More likely, the storytellers were thinking in the same direction simply because real-world events repeat themselves, and similar situations inspire similar stories. Even when a similar situation isn’t a factor, complete coincidence is much more likely than plagiarism. You can find “eerily similar” ideas between many stories.

For instance, I once had a commenter roll up and accuse me of taking the example magic system I’d created for an article from a book I’d never read. This was especially silly because the system involved getting magic by eating a plant, and that’s not particularly creative. I’m pretty sure two storytellers can invent that one independently.

Similarly, the news is filled with plagiarism lawsuits that ultimately fail because the resemblance between stories could be coincidence. While the targets of these lawsuits are at least winning their court cases, the lawsuits are still costly for everyone involved.

Plagiarism is very real, but it almost always involves copying not just ideas, but their expression. Again, that’s the valuable part. No one thinks it’s worth stealing someone else’s ideas only to do the hard work of writing the story themself. If they’re inspired by someone else’s work, most writers would much rather ask for permission before they commit all of their time.

Instead, the goal of a plagiarist is to benefit from content without putting in the work to create it. That means stealing the actual text, music, video, etc. Sometimes they make minor or superficial edits to serve their purposes. Often, their changes to the original make it worse. They’re in this for a quick buck or a passing grade, not because they love the art form.

For instance, take this quote from the author’s note in Skin of the Sea by Natasha Bowen:

When I was six years old, my favorite book was The Little Mermaid by Hans Christian Andersen. I was obsessed with the palace at the bottom of the sea and the magic and mystery of the little mermaid’s world. I remember reading that book over and over again, examining each illustration and convincing myself that it was all real. And even though I never saw myself in that story, I wanted to be a little mermaid, too.

Bowen set out to create her own version of The Little Mermaid that would represent Black women and girls. She researched Black mermaids and discovered deities and water spirits from African folklore. Then she added in real world history about the slave trade, spinning all of it together to create a story that had iconic aspects of the Danish fairy tale while honoring Black history and culture. Her novel is deliberately derivative and, in being derivative, performs a vital function that a completely original tale could not.

Fan fiction is much derided for re-spinning existing stories – and for being associated with women, queer people, and other marginalized groups – but it also performs important functions. Many fan fiction stories are designed to ease the stress of high-tension works by offering low-tension personal scenes. Others are “fix-it fics,” which demonstrate ways that problems in the original work could have been rectified. Sometimes fix-it fics focus on craft problems in the original, and sometimes they focus on the underlying messages, exchanging toxic messages for positive ones.

When the derivative nature of a work is a problem, it’s specifically because those derivative aspects are implemented in a way that detracts from the rest of the story. If a storyteller fails to examine their ideas and build their story in an intentional way, they may rehash tropes from popular stories that do not make sense in theirs. Similarly, marketers love to copy whatever made money recently, and they hate to take risks. They can push storytellers into turning what would be a fresh story into a hollow imitation of the latest fad. But in these cases, the problem is not merely that tropes are reused, it is how they are reused.

Altogether, originality is a terrible measure of the quality and value of a work. So let’s look at a better way to discuss the benefit originality can offer.

Novelty is our intense interest in things we haven’t encountered before. While originality often provides audiences with novelty, they are by no means synonymous. A hammer covered in mud and wrapped in licorice sticks is original, but it would probably not create novelty in most contexts simply because it is too bizarre and silly.

On the other hand, story elements do not need to be original to provide novelty. Instead, they might simply be new to that audience. The novels Soon I Will Be Invincible and Artemis Fowl delivered lots of novelty to readers by featuring a super villain protagonist. But far from being original, that trope was already well used in comic books.

Novelty can also be generated by mixing story elements that are well-worn but not usually seen together. The movie Abraham Lincoln: Vampire Hunter gets attention by recasting a historical figure. Similarly, many fanfics add novelty by switching the genre. Fans are fascinated when a beloved character who’s spent seven seasons fighting zombies on TV instead engages in courtly intrigue.

Whereas originality is inherently a binary concept, novelty is a quality that more naturally falls on a spectrum. This means that storytellers can work on improving the novelty of their work without holding themselves to an impossible standard. And whereas the opposite of original is derivative, which can also offer value, the opposite of novel is cliché, which refers to nothing other than the quality of being overused.*

Most of all, novelty better represents the limitations of using new concepts and techniques to generate entertainment. While a work will always be original, novelty is lost quickly. Classic works are often boring because they depended on novelty, and once that novelty faded, they had little to offer.

While every storyteller should cultivate novelty, it should be used alongside other forms of engagement. It shouldn’t be treated as more profound than other aspects of storytelling, as originality often is.

Unless it’s referring to idioms, but that’s another discussion.