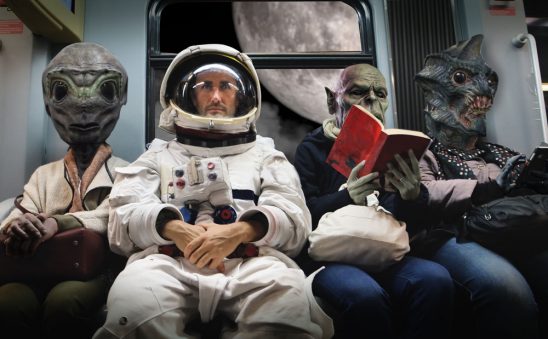 One of the most common questions that comes up in writing is how to gracefully describe the point-of-view character. In limited perspective, the narration reflects what that character is thinking at some level. While it’s easy to work in description of other characters as soon as the viewpoint character looks at them, what about the viewpoint character’s own appearance? People don’t have much reason to mentally review their height and hair color, and that can make descriptions of the protagonist sound forced.

Fixing this issue requires finding some way for the protagonist’s appearance to come up during the scene. Writers should ask, “In what situations does a person’s appearance matter?” and “What would remind someone of how they look?” You can start with these nine ideas.

1. Show Them Dressing Up

One of the easiest ways to work in a protagonist’s appearance is to include a scene where your character is actively polishing that appearance. Perhaps they are nervously preparing for a formal event or an interview.

If you mention their hair at all, it’s easy to slip in an adjective like “red” or use a noun like “curls” instead of the more generic “locks.” The viewpoint character can consider whether the color they are wearing looks good on them, making it easy to work in skin tone and eye color. They can also be doing battle against any flaws in their appearance: taming their frizz with gel, covering acne with concealer, or using shoulder pads to look broader.

This is also a great way to specify your character is trans, because trans people often take specific steps to present the way they want to that distinguish them from cis people.

2. Make Them Dirty or Injured

On the opposite end of the spectrum, your character might need to recover from something that altered their appearance in some way. This will focus the character’s attention on their body, making it easier to work in descriptors of what they look like.

If your character was hard at work all day, they might need to wash the mud off their feet or pick leaves out of their hair. Injuries and bandages can highlight parts of the body and call attention to skin color. Injury and general health can also be used to talk about someone’s size or age. A description of a black eye can easily work in eye color.

This option is great for stories that open with action, leading to injuries or appearance mishaps.

3. Let Them Have Trouble Fitting In

If your character is in any situation where their appearance doesn’t fit in, they’re likely to think about it. This is especially true if they are in a high-pressure social situation. They could be attending an important meeting or starting their first day on the job.

Trouble fitting in could mean something as obvious as being a dwarf among elves, or it could be more subtle. Perhaps your viewpoint character thinks others will see them as a fraud because they aren’t wearing designer clothes. Maybe they are a fraud, disguised for a covert operation. Regardless, a character who feels out of place is likely to compensate by overthinking their appearance and trying to control what aspects of it they can. A dwarf among elves may still try to wear the latest elven hairstyle or mourn the fact that their hair isn’t compatible with it.

This is a great match for a YA protagonist who feels out of place at school.

4. Compare Them to Family or Friends

A flexible way to describe appearance is to have your character compare or contrast their looks with another character nearby. The only catch is that you’ll need a reason why they would do that.

An easy one is for a family member to enter the scene. After describing what that family member looks like, you can bring up that they look just like the narrator, they surprisingly don’t look like that narrator, or that they share some features and don’t share others. Best friends also work pretty well for comparisons because the two characters will be considered a set that’s often seen together.

While the viewpoint character might feel inadequate next to the good looks of a friend or rival, for likability reasons I recommend making them admiring instead of resentful about it.

Photos, or paintings in low-tech settings, offer a great opportunity to show readers who and what a character cares about. Since the viewpoint character is probably in the photo, they’re also great for working in character appearance.

Depending on the scene in the photo, you can describe wind-tossed black hair, laughing green eyes, or pale skin gone red under the sun. If it’s a childhood photo, it’ll be only natural for the viewpoint character to think over how their appearance has changed. If you’re using a painting, the character might also consider what the painter got wrong and what they got right. Their nose is a little big, but not that big!

If you need to work in some character backstory, photos make that easier as well, allowing you to feed two birds with one hand.

6. Use Comments From Others

If your character has a look that resembles a celebrity, people may remark on that. This can easily make the viewpoint character think about how their appearance is similar or different from that person. Just don’t expect readers to know what the celebrity looks like; you’ll need to describe them. Otherwise, unusually long hair, brightly striped socks, elaborate braids, or a stylish coat could be brought up in conversation. Maybe your character is wearing contacts instead of glasses to work for the first time, causing everyone to remark on how their eyes look.

If other characters are being flattering, keep in mind that this is candy for your viewpoint character. If you’re introducing your protagonist, keep it mild and make sure to give them some spinach as well.

Your character might want attention from someone else. This makes their appearance crucial to achieving their goals.

Romances are obviously a good match for this. Once your character meets a cutie, it’s only natural for them to think over whether they look good enough to dare ask for a number. If they’re a performer of any kind, they might be trying to attract attention from a crowd, or maybe they’re at a party hoping their looks will impress their picky peers. Social media also provides an incentive for people to worry about how they look. Your character might take a selfie and post it online, hoping the brown strands of hair over their eyes will make their pic look natural instead of unattractive.

Women are often stigmatized for wanting attention. You can help reduce stigma by depicting it in a sympathetic and positive light instead of dismissing it as vanity.

8. Curse Them With Apparel Mishaps

We’ve all had times when our wardrobe did not work out. This will naturally put your character’s attention on how they look or whether the malfunctioning item is a fit for them.

An apparel mishap could be as urgent as jeans that split open across the butt or as subtle as a shirt that’s uncomfortably tight. A pencil skirt could prevent the protagonist from running in an emergency. The protagonist might resist ripping that skirt because it’s difficult to find one that fits their wide hips and it’s a nice blue that matches their eyes. Hair fasteners that fall out could reveal their hair is difficult to fasten because it’s straight and fine. Makeup that runs or rubs off could easily be compared to the character’s pale or dark skin.

While feminine getup is usually more complicated and prone to mishaps, a character that prefers masculine clothes can still fuss over a smushed hat, ill-fitting coat, or a ruined haircut and shave.

Never mind all that social stuff; your character is a loner out in the wilderness. Who cares how they look? Well, if they have any reason to avoid being spotted by people or critters, they still might.

Human skin comes in a whole range of shades, and that can change whether or not your character blends into their surroundings or is visible for miles. Red hair will definitely stand out among greenery, and pale blond or black hair will stick out against the right background. If your character makes any effort to camouflage themselves, that’s a great segue into mentioning some basics about their appearance.

Even if they don’t need to sneak around or hide, someone living far away from other people may also monitor their body closely to make sure they’re getting the right nutrition. Feeding yourself in the wilderness isn’t always easy.

Look for a solution that you can slip into whatever beginning you have planned for your story. It’s not worth changing the opening scene just to describe your character gracefully.

Do you have ideas I didn’t mention here? Leave them in the comments!