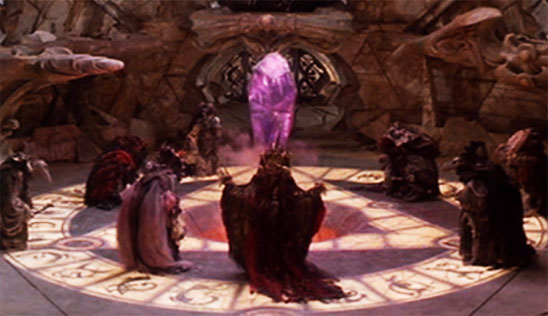 Positioning is critical during the climax of The Dark Crystal

Some writing techniques seem so simple that we take them for granted. That is, until we have to use them ourselves. So I sympathized with Jo when she asked:

I am a bit confused about describing spatial relationships in fiction. How close or how far away are objects or people and how to describe this in prose. Also how to use spatial words without it looking clunky in fiction? Words like above, under, to the side, left, right….

Positioning is one of those aspects that is only noticed when the writer messes up. And unfortunately, writers do mess it up regularly. Here’s some advice to help you avoid pitfalls and feel more confident about your work.

Why We Describe Spacial Relationships

Every writer will handle positioning a little differently from any other. To start making those judgments for yourself, you’ll need to know exactly what it does for your narration and what it doesn’t do.

Narrative positioning isn’t equipped to convey precise schematics of an area. It cannot make layouts as detailed and complete as a visual medium. When an accurate and complete idea of layout is essential, such as the crime scene in a mystery novel, authors like Agatha Christie include a map for readers to examine in depth.

Providing too much narrative positioning will be overwhelming or boring for readers, whereas providing too little will make the setting evaporate. That means satisfying these purposes depends on a subjective balance.

I’ll go through each purpose in turn and describe ways to narrate position.

When starting a scene in a new location, it’s wise to position large physical features like cliffs, towers, and ravines. You should also work in significant items that the characters will interact with later, like a vehicle or weapon. You can place these items either in the opening paragraphs or when the viewpoint character first looks around. What’s important is that significant features are mentioned before they alter the reader’s experience or otherwise affect the scene. As discussed in my critique of Eragon by Christopher Paolini, the author waits to mention a large piece of granite nearby until the viewpoint character climbs onto it to get a better view. It feels like the granite just pops out of thin air. If he had searched through the forest to find a boulder to climb on, that would have excused its late appearance.

When placing objects and people, what you want to convey is a general idea of where objects are relative to one another. Here’s a no-frills example of scene setting from John Scalzi’s Old Man’s War:

The inside of the office was even less appealing, if that’s possible. It consisted of a desk with a computer and a printer, a human behind that desk, two chairs in front of the desk, and six chairs lining a wall. A small table in front of those chairs held recruiting information and some back issues of Time and Newsweek.

That’s certainly functional, but it also might be what Jo calls “clunky.” It can feel awkward to simply state position outright, but keep in mind that it will sound more awkward to you than it does to your readers. In this case, Scalzi wants the office to sound boring, so his description is equally boring.

Even if you don’t want your description to be so straightforward, you’ll need simple positioning terms like above, below, in front, behind, etc. As long as you weave them in judiciously, they shouldn’t feel monotonous. They can be especially useful when describing where things are relative to your viewpoint character.

You can get the job done artfully through the clever use of illustrative verbs. Pick a pair of items and describe their relationship using active language. This gives the description more personality and maximizes the utility of the sentence.

You also use verbs to describe where characters are relative to one another. Instead of directly stating that Harry is in front and Sally behind him, you can write:

Don’t Get Too Precise

More specific terms are rarely used for setting position. Unless your viewpoint character has a reason to care about exact measurements, avoid using numbers and units. Instead of specifying that a room is “twenty feet by twenty feet,” just say it’s “spacious,” or if it’s even larger, “cavernous.” Instead of saying that Harry is walking “three feet ahead,” say he’s “just out of arm’s reach.” As my breakdown of I Am Number Four demonstrates, precise measurements sound unnaturally clinical, and they often require readers to pause and think about the length.

Instead of “left” and “right,” it’s usually better to write “side” and let the reader imagine which side. Sometimes, however, you will need readers to keep track of two different sides. Perhaps your hero’s path splits off to the left and right, and the hero has to think about which side to take. Still, in that case calling them by descriptive names such as “the sunny path” and “the shadowy path” will be easier for readers to remember.

After you’ve given the basic layout of the setting, you’ll need occasional reminders that your characters are in this layout and not drifting in the clouds. To do this, you should know where everything is yourself – more than what you tell your readers. If you make up positioning without having a solid idea of the layout and what’s happening in it, you could end up with strange distortions like the expanding storage closet I discussed in my critique of The City of Bones. Once you have the layout drawn out or pictured clearly in your mind, work in occasional references to the position of items as you call attention to them. You can use any of the following three techniques.

Bread-and-butter terms such as above, below, in front, or behind are especially useful for transitioning when the focus of the narration shifts from one area to another. If your character stares at the grass and then looks up at the clouds, you’ll need a good transition.

Terry examined the broken lines of the black feather. Where did it come from?

Behind him, the doorknob rattled. He swung the door open, but only silence waited on the other side.

Your viewpoint character isn’t a pair of magical transporting eyes;* they’ll have to turn their head or take a few steps to look in different directions. Larger character movements can also be used to establish position. Instead of writing “she went to the pool,” write “she stepped down to the pool.”

The cabinet had glass doors, yet the clocks inside were dusty. Abbie reached over the cabinet to feel if the cover was broken and brushed something cold and smooth. What was that? She stood on her toes and craned her neck, but it remained hidden.

If your character moves from one place to another, describe what they’re crossing or what’s passing by. If two characters call out to each other or become embroiled in a staring contest, you can also mention what they call across or look over.

Jesse swung open the gate and padded over the grass to where Naya slept. The tresses of her favorite willow swayed as he crouched to share the shelter underneath them.

If you’re writing in limited perspective as most authors do, keep your description in your character’s viewpoint. You should be describing what they are looking at; don’t narrate things that they can’t see or show what they do see from the wrong angle. For example, take this excerpt from The Sword of Truth by Terry Goodkind:

The sounds of the forest fell dead still. Richard looked up, flinching as a dark shadow swept over the ground, leaping across limbs and leaves. There was a rushing, whistling sound in the air overhead.

Goodkind describes a shadow on the ground, but Richard isn’t looking at the ground; he just looked upward toward the tree canopy.

If your characters aren’t interacting with their environment at all during the scene, you should probably add that. But you don’t need much, and you shouldn’t let it obstruct emotionally charged moments. Look for ways the environment can enhance character interactions or the general mood. A stressed character might clutch the arms of their chair. A restless character might casually rip the leaves off plants and toss them aside.

When your scene has intense conflict that manifests physically, positioning becomes essential. In some cases, you may find it necessary to make your language more specific. For instance, here’s a great example of left and right in use, from The Southern Reach trilogy by Jeff Vandermeer:

I had time to take a half step to the right.

The first shot took me in the left shoulder instead of the heart, and the impact twisted me as it pushed me back.

In this case, using left and right is the easiest way to communicate how the viewpoint character narrowly avoided a bullet to the heart. In addition, when describing essential details about someone’s body (such as an injury), the side of the body becomes much more relevant.

Some subgenres such as military scifi may even use exact measurements and clock positions (enemy at 2 o’clock). The readers of this subgenre are interested in battle strategy; they’re more likely to enjoy pausing to think the situation through. If you’re writing in a genre like that, I recommend reading some classic works to see what the conventions are.

Otherwise, your goal isn’t to convey every detail of the fight. Communicating position in a conflict is about simplifying as much as possible and carefully explaining the implications of position. Readers need to know not just where characters are positioned, but how that impacts their chances of success.

For a great example, look at the zero-gravity fight scenes in Ender’s Game by Orson Scott Card. This book features group-versus-group battles in a three-dimensional environment, essentially inside a big cube. I can’t imagine a harder scenario to describe, but Card does very well. He keeps the description general, then carefully explains the relevance of position and movement to the fight. Here’s an excerpt:

[Ender’s soldiers] gathered into three groups, feet together, squatting, holding hands so they formed small stars against the back wall. “We’ll go around them and make for the door. Now!”

At his signal, the three stars burst apart, each boy launching in a different direction, but angled so he could rebound off a wall and head for the door. Since all of the enemy were in the middle of the room, where course changes were far more difficult, it was an easy maneuver to carry out.

Notice that Card is not trying to make his narration sound artful or flashy. That’s because the more critical position is to the scene, the more straightforward your description must be. Just like any form of narration, clarity is more essential than creativity. When your readers are confused, they won’t enjoy anything your story has to offer. When they aren’t, the best positioning can do is blend into the background, so your characters take center stage.

If they are, you have bigger problems.