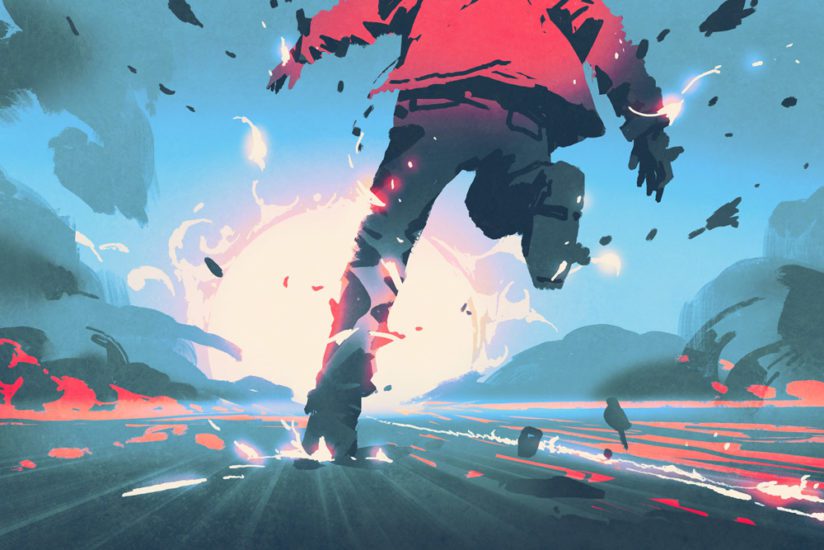 Your story can have tense twists, engaging characters, and a meaningful message, yet still miss something essential. Without it, audiences are left tapping their fingers, wondering when the real story will begin.

On the audience’s end, movement is the sense that the story is making progress toward the conclusion. Without movement, audiences feel like nothing is happening and their time is being wasted. This is true even when the story is exciting.

Notable examples of poor movement include the infamous Harry Potter and the Deathly Hallows camping scenes or the “filler episodes” in many TV shows such as The Mandalorian.

While the concept is simple, creating a sense of movement can be quite complex on the storyteller’s end. Below is how Aristotle described the principle.

… the plot, being an imitation of an action, must imitate one action and that a whole, the structural union of the parts being such that, if any one of them is displaced or removed, the whole will be disjointed and disturbed. For a thing whose presence or absence makes no visible difference, is not an organic part of the whole.

In the next section, he complains about stories with poor movement.*

Of all plots and actions the episodic are the worst. I call a plot ‘episodic’ in which the episodes or acts succeed one another without probable or necessary sequence.

Aristotle was wrong about a great many things, but he wasn’t wrong about this. Unfortunately, he’s also hard to understand. What is a “necessary sequence”? What does it have to do with the impression that the story is heading toward a conclusion?

Think about it this way. You’re walking to the corner store at the end of the block. To do this, it’s necessary to take a step in the direction of the corner store. That gets you closer to your destination. Also, you can’t arrive at the store without first walking past the middle of the block. If you stop your walk before you get to the middle, the rest of the trip “will be disjointed and disturbed.”

On the other hand, watching a squirrel in a nearby tree will not get you closer to the corner store. You can remove that activity from your walk, and the whole walk will not be “disjointed and disturbed.” It is an act that Aristotle would call “episodic.” Nowadays, we’re more likely to call it “filler” or “a tangent.”

So the most basic requirement of movement is that each event is necessary in bringing about the story’s end. You can think of it like a line of dominoes: if one domino doesn’t fall, the rest won’t fall.

In practice, however, it’s a little more complicated. Ensuring good movement means setting the right expectations and considering how your audience will perceive the story as they continue through it.

Imagine the audience as a bunch of creeps watching your walk to the corner store. They’ll need two pieces of information to judge your progress.

When beta readers tell us that they have no idea where the story is headed, it’s easy for us to believe this is a good thing. After all, it means our story isn’t predictable or “formulaic,” and, let’s face it, we could use a silver lining during feedback. Unfortunately, this is actually a sign that the plot has no throughline, and therefore, no destination.

Of course, the audience shouldn’t know how the story ends. But they should know what qualifies as an ending for the beginning you’ve created. If your hero is a chosen one prophesied to defeat the dark lord, they gotta do that, or the dark lord has to kill them. If your hero is stranded in the Arctic during a blizzard, they have to die or make it out alive. Whatever problem is creating tension for the whole story has to be resolved in one way or another.

Movement doesn’t necessarily mean watching the hero rack up successes as they get closer to achieving their goal, though it can. More precisely, it means the overall conflict is coming to a head or approaching a point of no return. In some stories, there is a specific deadline the hero must meet to succeed. In these cases, simply watching the clock tick down can provide movement.*

A story without a destination won’t feel like events are approaching that final moment. It will feel like it’s wandering around aimlessly. If you’re hitting a wall when it comes to moving forward on your throughline, ask yourself why. Is the story’s big problem too easy to solve, giving your hero little to do? Is it too hard to solve, giving your hero no options for moving forward? Address these problems before you do anything else.

Progress is relative. If you start out at a run and then slow to a walk, that’s less exciting than if you start at a walk and speed up. If the corner store looks like it’s only a block away and then the ground unfolds to produce two more blocks, that’ll make your creepy onlookers really impatient.

Expanding terrain happens frequently during travel sequences. This is one reason travel is the bane of speculative fiction. Before the travel begins, the storyteller often focuses on the destination. This leads the audience to anticipate the destination as the next step in the story. The travel itself feels inconsequential. Then the characters start traveling, and it takes much longer than expected. This means movement is slower than the storyteller promised. It’s no wonder audiences hate travel.

We have two solutions to this. Either set expectations that travel will be a grand adventure in itself, or simply summarize a little and skip forward a whole bunch. Many writers are reluctant to jump past travel because it’s arduous in their setting. But if you don’t present traveling as a challenge the heroes must overcome, you don’t need it. Just convey what the general experience of traveling was like, and make it feel like your characters have been on the road.

Besides travel, movement can feel too slow if you don’t have the right balance of throughline and episodes in an episodic story. This is the TV filler-episode problem. To avoid this, we need to remember that the highest-tension story arc takes the reins. If you want to have the equivalent of a season arc that “builds in the background,” its tension should be lower than the tension of individual episodes.

In The Mandalorian, the big bad wants to capture Baby Yoda (Grogu) for cruel scientific study. Mando is trying to protect Baby Yoda, but every bounty hunter in the guild is after them. So when Mando takes a bounty-hunting job for an episode, that doesn’t seem important in comparison. The story started off at a run and slowed down to a walk. In contrast, during many TV shows, the season villain starts by merely making themself known. They don’t cause mayhem that requires the hero’s immediate attention. This allows individual episodes to take center stage while the season plot slowly escalates.

Creating Movement at Every Stage

So far, I’ve mentioned the audience needs a rough idea of the story’s destination so they can observe the story’s progress toward it. But what if we want to pull off a big twist? The audience may not know the true meaning of events when they occur.

Tiding the Audience Over

In Star Wars: The Empire Strikes Back, Luke goes to Dagobah seeking Master Yoda. On Dagobah, he meets a strange little alien with irritating mannerisms. It turns out the little alien is actually Yoda, who’s been testing him.

In many twists like this, a sequence of events takes on new meaning afterward. Before then, events may not seem important. How can we pull that off if the audience always needs to see the story progress?

First, let’s cover the wrong way to do it: by telling the audience to be patient while they wait for meandering events to lead somewhere. If events are moving the story forward but the audience can’t tell, they won’t have a great experience in the meantime. It’s not just the end of the story that matters. If the audience quits in the middle, they’ll never reach the end anyway.

While you can’t tell people to wait, what you can do is play switcheroo. Give the audience another reason to believe that events will move the story forward. When they reach the reveal, that reason may not hold up, but they’ll have a new one. For instance, when Yoda shows up, viewers don’t know who he is. Even so, Yoda promises to lead Luke to the Jedi master Luke is seeking. This makes viewers believe that hanging out with an unknown swamp alien will lead somewhere. When they discover the alien is actually Yoda, the story movement is faster than expected. This makes the reveal a positive experience.

Just like we shouldn’t make events seem meaningless before revealing they matter, the opposite is also a problem. If the audience believes a sequence moved the story forward only to learn otherwise, that’s really unsatisfying. For one thing, events that don’t shape the story’s outcome have no meaning. For another, from the audience’s perspective, progress has gone in reverse! They thought they were closer to the end. Then they found themselves back where the sequence started.

Ensuring every event matters can be tricky, especially if the plot is big and complicated. This is one reason stories should be trimmed down to only the elements they need. Superfluous elements not only take up space and hinder movement, but they also leave the audience feeling frustrated that they didn’t amount to anything.

What kind of reveal destroys movement after the fact? A red herring, false lead, or failed attempt from the hero. Your hero might follow an innocent suspect, use a fake treasure map, get a chilly reception from potential allies, or try to defeat a villain only to fall on their face. All of these events can risk making the hero’s efforts amount to nothing. That means we need to turn these reveals into our good friend, the switcheroo.

First, can your false lead be fruitful in a way the hero didn’t expect? Often, failed attempts can provide crucial clues. An innocent suspect might divulge their secrets. After getting lost, the heroes might discover the treasure map is fake and figure out who made it. That person might be their new lead.

Another option is to escalate the conflict to the villain’s advantage. This is particularly appropriate when the hero has made a bad call. Perhaps they acted impulsively when they used the fake map or challenged the villain too early. As a result, the hero could be taken captive, important allies could side with the villain, or the hero might end up on the run. From there, you can create lots of plot opportunities that wouldn’t have been possible before.

The bottom line is that audiences should always feel events are relevant, no matter where they are in the story.

When your plot is working, it will feel like events are building on each other. If the hero takes a variety of actions that operate independently, you have a movement problem. Your audience needs to see the dominoes fall, or they’ll keep asking, “Are we there yet?”

This is also as close as he gets to mentioning throughlines.
However, it will still be unsatisfying if events only make a difference by using up time.