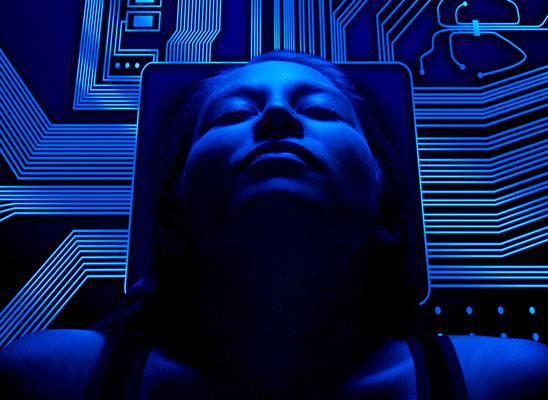 In the not so distant future, we will all be ruled by machine overlords in a post-apocalyptic waste of a world. Ironically, these mechanical monsters were once our greatest creation. This is the dark future predicted for us in The Matrix. Movies like this explore the concept of artificial intelligence, and evil machines are one of many possible futures that could result. Of all the fantastic predictions of science fiction, none seem as tantalizingly close as real artificial intelligence.

The moment we create an intelligence that surpasses our own, the genie would be out of the bottle. It would lead us to think in radically different ways and perhaps alter the future course of our species. Would this new intelligence be benevolent or evil? Scientists have called this moment the technological singularity. It’s a barrier beyond which we cannot predict what will happen, much like the unfathomable singularity in the heart of a black hole.

So far, all of our efforts to create a thinking machine have failed. Computers do exactly what they’re instructed to do, with no original thought of their own. That spark of creativity seems to be missing. IBM’s Watson is an interesting computer program that learns problem solving from interactions with humans, but even Watson fails the Turing test for human-like intelligence. Theoretical science has suggested a shortcut: what if we were able to download a human mind to the machine?

Computing power is increasing at an exponential rate. Processors get more powerful, while data memory and storage grow in capability and drop in cost. At the same time, cortical implant technology is advancing at an incredible pace, allowing the deaf to hear, the blind to see, and even helping the paralyzed to move their limbs again. Amazing as this is, we’re still not able to connect to the actual thinking part of the brain. In The Matrix, users ‘jacked in’ with a plug in their head. Unfortunately, to connect to the executive functions of the brain, we will probably have to get a lot more invasive.

If we are able to overcome the remaining obstacles to human/machine interfacing, what would the first human upload be like? Would it be just a copy, a shadow of the memories and experiences of that individual? Even that might be incredibly useful. Imagine being able to ask the memory of Einstein for advice. Everyone could have a copy of Warren Buffet operating as their personal financial advisor. The knowledge of great minds in every field could be preserved and consulted, even after their death.

Take one step further down the rabbit hole and imagine that when a mind is uploaded, the whole consciousness could be transferred, as well as the personality and memories. The union of mind and machine is the primary concept of scientist and author Ray Kurzweil‘s body of work, including The Singularity is Near: When Humans Transcend Biology. In Kurzweil’s view, the technological singularity will be when we can blend the human mind and machine into a single entity, which he thinks could happen as soon as 2045.

The possibilities of being able to upload yourself to a machine are astounding. If we could translate our thought patterns into some form that can be moved, we could travel easily through a network to other locations. The term “telecommuting” would probably be insufficient to describe downloading your mind to a robot working in hazardous conditions, such as at crushing sea depths, inside an operating nuclear reactor, or in the vacuum of space. For that matter, without all this fragile biology to care for, long space journeys would suddenly be possible. Doctors could transfer to a remote surgery unit for emergencies in rural towns, and patients could upload to a virtual waiting room, sparing themselves pain and the possibility of death on the table.
Once your mind is uploaded, you could become essentially immortal.

Though your body would wither and die, your mind would live on. Members of the military and important officials could make a backup of themselves in case they didn’t survive some critical engagement. What if they could then download their mind into a new body? Advances in organic printers and tissue growth could allow for the fabrication of a replacement body in case the original is destroyed. With this technology, humans could colonize the worlds of our own solar system by travelling from Earth as a data packet, then reside in bodies tailored for their unique environments.

Of course, along with these advances, a whole host of new problems would probably develop. Lovers might swap bodies to experience sex from the other side, and may not want to switch back. A poor, yet attractive youth might literally sell their body to someone wealthy and powerful seeking to make themselves young and beautiful. Some people might keep an entire stable of alternate bodies, and body theft could become a very real crime. Others might begin making multiple copies of themselves, perhaps making a quick, efficient, and fiercely loyal crime syndicate.

Some people might decide to give up the physical world all together in favor of constructing their own private utopia in a virtual environment. Vast worlds could be created that take up only a tiny physical space in the server stacks of the future. Those not tied to physical bodies might have no need to sleep, so their knowledge and understanding could grow at an astounding rate. Eventually, their knowledge and experience might outgrow what is strictly possible in the confines of a biological brain.

Once we have migrated to the machine, would we really be the same as our biological selves? Would we be cold, heartless, and strictly logical as many have imagined, or would we remain the thinking, feeling, emotional beings we are now? Certainly, our view of what it means to be human would be altered, or at least blurred. As more and more of us migrated to the machine, would we come to regard the biological form with contempt? Would natural humans be kept around as a curiosity, or would we evolve into something new and different?

There could be some who elect not to go digital. Whether for religious reasons or for pride in the purity of the human form, they might take the blue pill and never dive down the rabbit hole. Our species could live on as the human animal, but wouldn’t we be beholden to the technologies of the advanced humans? It seems inevitable we biologicals would have to submit to the rule of the wiser and immortal machine minds.

Wouldn’t it be ironic if the machine overlords we fear are destined to rule our race in the future…are actually us?