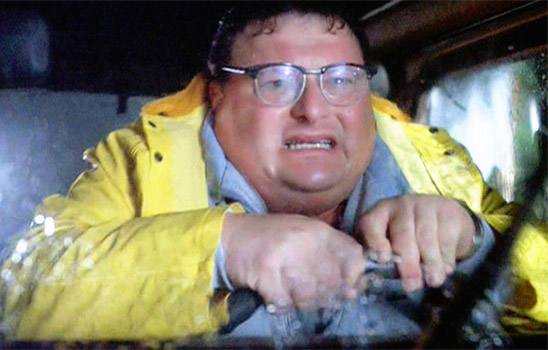 In Jurassic Park, Dennis steals company property and sabotages the security system to pay off gambling debts. Might that clearly harmless dinosaur kill him? Of course not!

Informally, a person’s karma is the destiny they have earned. It means that those who have done good deeds will have a better future awaiting them, and those who have committed wrongs will be punished by fate. You may or may not think that karma exists in real life, but in the Land of Make Believe, it’s as certain as gravity.

Characters have karma when the audience thinks something good or bad will happen to them – just because it feels right. This feeling starts with a shared sense of morality, and is reinforced by storytellers who make similar choices. If you’ve ever predicted which characters would die in a horror story, you almost certainly used their karma to do so.

When a character accumulates bad karma, the audience will wait for the other shoe to drop. This can make your story more engrossing, but it also means you have to follow through. And unfortunately, resolving bad karma can be like navigating a minefield.

Karma is determined by the values and practices of each culture, so your audience may not agree on whether bad karma has been earned. However, these are common karma-inducing patterns in western media.

Whenever someone brags about how easily they’ll complete a difficult task, you know the plot will teach them a lesson. This is not only because the character deserves it, but also because the scene would be pretty boring if everything went well.

In Dragon Age: Origins, King Cailan boasts how the battle against the darkspawn will be a piece of cake. So every player is sure it will go horribly wrong, and he’ll bear the brunt of it.

If the heroes actually have an easy time with a task that was supposed to be challenging, then the audience will wait for a catch. This is like the finale of a video game, when the end boss dies after a few hits, only to regenerate at ten times their previous size.

In Galaxy Quest, Captain Nesmith is captured by aliens, then wakes up in an arena. His opponent? An ugly but underwhelming beast. As the aliens chant around the edges of the arena, the crew starts to wonder what they’re so excited about.

There are few things we like better than punishing wrong-doers. If a character shows less than outstanding moral fiber and gets away with it, we know something bad will come their way.

Alfrid from the second and third Hobbit movies acts selfish and annoying yet repeatedly escapes punishment. You can’t help but think he’s being saved for Smaug’s breakfast.

Bad karma is a foreshadowing tool that will help you build tension. If your picnic scene is too peaceful, add anticipation with phrases resembling “what could go wrong?,” “at least it can’t get any worse,” or “how hard could it be?” If your hero gets away with an elaborate theft, take advantage of their poor karma by making the police stop by their home to ask about a lost dog.

Karma also helps storytellers craft a satisfying ending. Let’s face it, most of us experience unsettling joy as distasteful characters get slaughtered. Storytellers like Stephen King have built entire careers by piling bad karma on a character all story long and then satiating blood lust at the climax. Even in comedies, who doesn’t like to watch the overconfident jock get kicked in the gonads?

Most storytellers will challenge cultural norms at some point. So even when our audience feels the bad karma building up, we may not want to indulge it. Satisfying bloodlust can even be unethical or inappropriate. For instance, here’s a couple character archetypes that have bad karma, but haven’t really done anything to warrant punishment.

Most American horror flicks still have a “slut” that dies early. While we may not engage in casual sex ourselves, these days most of us don’t want to punish others for their personal lifestyle choices. And if we kill the promiscuous character out of tradition, we reinforce the cultural vendetta against real people who are seen in a similar light.

In Season 3 of Teen Wolf, Stiles’ childhood friend Heather decides to take charge of her sexuality, clearly stating her intention to lose her virginity on her birthday. She is so dead.*

Scientists in horror films always dig too greedily and too deep, unleashing terrible forces on everyone! But we don’t really want to punish people for inventing things, do we? We need scientists and engineers to expand the limits of our knowledge and develop risky new technologies. If every scientist turned evil or was murdered by their creations, we’d be in big trouble.

In Event Horizon, Dr. Weir is seduced by the evil ship he designed. Then he mutilates himself and goes on a killing rampage. That’s no more than he deserves for creating faster-than-light travel.

We probably don’t want to punish characters for fitting either of these archetypes. But that doesn’t mean that we have to leave our audience hanging.

To defeat audience expectations, we have to recognize their presence in the story. An easy way to lampshade character karma is with dialogue. Let someone tell your character that they are clearly going to die next, because they had sex or did research on the black hole.

Even if you won’t follow through, don’t be afraid to capitalize on the tension that comes with bad karma. Your character can spend the entire story flirting with death, as your audience wonders when the promiscuous scientist will finally have her face eaten by the cockroaches she raised from the dead.

Then create one pivotal moment to tell the audience that your character is not going to die, go to jail, or get whatever punishment might be expected. In this moment, they should deal a resounding blow to the enemy. Don’t let them backpedal by deciding to wait until marriage or stopping their wild experiments. Instead they should be defiant and proud of the traits they were condemned for. If this moment is clear enough, you’ll satisfy karmic expectations in a surprising and delightful way.

Karma is the flying elephant in our space shuttle; if we ignore it, our story will die from a crash landing into a nearby star. Whether we want a flying elephant or not, we have to give it a leash and call it our own.

The killer was actually targeting virgins, but by complete coincidence, most of them were just about to have sex.