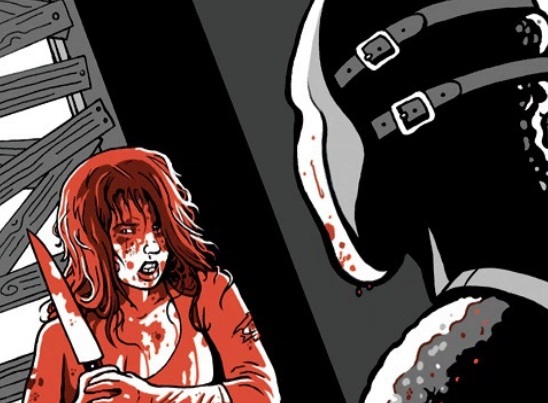 Most horror RPGs rely on the strong hand of a GM. Whether it’s the crunchy, complex investigations of Call of Cthulhu or the unpredictable, rules-light chaos of Dread, there’s someone at the reins to make sure the players are suffering. GM-less story games, however, have a harder time being scary. It’s easy to throw in the trappings of a spooky story, but the medium isn’t well suited to an actual horror atmosphere. These are games with ludicrously empowered players who are free to make ridiculous choices without consequence—what could be less scary than that?

One noble attempt to make it work was The Final Girl, which tried to emulate the tropes of slasher movies specifically. There’s no link here, because the creator eventually took it off the market. The Final Girl wasn’t a perfect system—it had some burned-in problems—but when it was clever, it was very clever. And fortunately, even though the game itself is gone, you can use its example to hack any story game into a horror game.

Create a Tense Atmosphere (by Ditching Plots and Challenges)

The problem most horror games face is this: they aren’t actually horror games. They’re adventure games where you have a higher-than-normal chance of dying. Of course, “horror” is whatever you want it to be. If it means D&D with rubber spiders and “The Monster Mash” on in the background, go with it. You do you. But most people would say that horror is about creating and maintaining atmosphere; the players (or viewers, or readers) should be full of tension. Dread, anxiety, fear… whatever you want to call it, the sense of nervous anticipation is what matters.

It’s trivial to elicit a momentary shock of fear.* What’s harder is holding onto that mood. There are plenty of ways to spoil horror, but perhaps the most fundamental is to put challenges before the players. Challenges can be overcome. There’s a truism with RPGs: if you give a monster hit points, players will try to kill it. Even if it’s mathematically impossible! Because if you twist the numbers juuuuuuust right, there could be a way. The possibility of success makes people feel hope. Actually succeeding at challenging tasks makes people feel proud. Neither of these are an ongoing sense of gut-punched dread, so… why allow them to happen?

Final Girl, for all its faults, proves that GM-less horror isn’t just possible; it’s actually a natural fit. It may seem odd because story games are built on player empowerment. Characters can do just about anything in narratives that anyone can twist without warning. And yet, story games are mood-setting engines, and that’s what really matters. Skeletons leaping around corners might give someone a fright, but an atmosphere maintained with the meticulous care of a bonsai is what holds in that delicious tension. There’s a reason The Shadow Over Innsmouth contains exactly one action sequence: it’s more important for the narrator to talk to unpleasant people and explore an unpleasant environment.

Story games are all about building a sense of place. The Final Girl emphasized this by denying the player who sets the scene the ability to dictate the plot. The other players decide who’s there and what they’re doing; the player who set the scene only gets to go wild with the introductory images. Whatever game you happen to be playing, take advantage of your scene-setting, and pull out all your best Lovecraftian adjectives to make the location chilling. You may still want to set a concrete goal for the scene, rather than just having characters hang out and wait to be killed, but make sure that the action facilitates an exploration of the setting. For example, instead of saying, “Okay, the deep ones are attacking. Let’s talk about how we’re going to escape,” say, “Okay, the deep ones attacked and now we’re fleeing. Let’s talk about why this town is an extra creepy place to run through at midnight.”

Doom Your Characters (and Don’t Give Them Any Outs)

Player characters in story games tend to be proactive. They set their own goals and are competent enough to, at least sometimes, achieve them. Unfortunately, go-getters don’t make great horror protagonists. Tension occurs when characters are forced to be reactive and are subject to forces outside their control. Or, even better, doomed outright. Some games, like Fiasco, already force failure on the players. That’s a good start, but it’s not necessarily fatal enough.

Horror games revel in the threat of people getting killed, captured, driven mad, or turned into one of “them.” Whatever the specifics, unpleasant and permanent things happen. Sure, you can and should make unpleasant things happen to your characters while story gaming, but it’s all a bit toothless if you choose to make it happen. To keep things scary, remove the power. The Final Girl puts doom front and center; at the end of every scene, a character dies. All you can do is hope that it’s not yours.

The Final Girl’s big mistake is that the person who dies is tied into an unnecessary and overcomplicated card mechanic. It’s as if Jason Voorhees kicks down a door to the cabin and challenges the teens inside to a game of blackjack. It pulls players out of the moment for several minutes, which is an indefensible sin in a genre that relies on maintaining atmosphere. If you’re going to hack The Final Girl, the easy answer is to ditch the cards but keep the death. At the end of a scene, someone dies. The person who set the scene decides who it is and describes how it happens. It’s a difficult choice, which is good because picking the least-bad option is an ideal horror-story feeling.

Now, “someone dies every scene” might not work for every game; The Final Girl is based on emulating slasher flicks, in which the sheer quantity of heads separated from torsos is more important than the quality of any individual kill. But any game can support a mechanism, outside the players’ control, which dooms people. For a simple example, everybody run one scene as normal. Afterwards, in the middle of every scene, someone draw a card from a deck. If it’s black, the characters all survive, but if it’s red, somebody dies this scene. Like Fiasco’s success-or-failure dice, this is a mechanic that takes less than a second to resolve, so it injects a little chance without disrupting the mood.

Create Extra Characters (so They Can Die Horribly)

Even though story-gamers know that it’s great to let your character die horribly, there are problems with an “anyone can die” mindset during a game. Having one player move over to running NPCs and bringing personality to the bad guys can be a good time; having two or three players in that role is a farce. It puts a lot of pressure on whoever still has a living character. Worse, it means players have gone from playing weak, doomed characters to playing powerful, dominating villains. That won’t do, because everyone should feel pressured!

The Final Girl offers one solution to this problem: have a friggin’ ton of characters. Characters are little more than a name and a couple words of description. Everyone’s making several characters at once, up to four each. This in itself isn’t unheard of; after all, a D&D adventurer about to enter the Tomb of Horrors has probably been advised to stat up an extra character, just in case. But here, the extra characters aren’t waiting in the wings for their turn to come on;* they’re active all the time.

Any character in The Final Girl can be played by any player. They are a shared resource. This means that plenty of characters are in the pile for the bad guy to slice through, and it means that even if the four characters a player made happen to be the first four to see their own lungs, that player isn’t left out of the action. The game starts with a large cast that gets whittled down rapidly, but until the very end, when it’s down to the killer and the titular final girl, players are equally invested and contributing.

Managing that many characters might be a bit much for most games. In The Final Girl it only works because they are incredibly, unbearably one-dimensional. However, having a couple extras around is worthwhile for keeping that “anyone can die” tension. During setup, pretend there are two extra people at the table, and create their characters as a group. For a game like Fiasco, where setting up the starting web of relationships already relies on the players working together, this is ridiculously easy. For something else it might mean taking a few extra minutes to set up a character sheet collaboratively. It’s worth it.

Make the Players Care (but Not Too Much)

There’s another, more powerful benefit to having characters be communal property: it gives the players a little distance from whomever they’re playing. Maybe that seems counterintuitive; after all, if the goal is to make players tense and hopeless, shouldn’t we encourage them to care about the characters?

Well, sure, and one of the reasons The Final Girl struggles is because the characters don’t give you many hooks to care about them, at least until they’ve survived several scenes. But the problem with characters you really care about is that even if you know that they’re doomed, you can’t help but hope that they’ll be the ones to come out the other end of this, scarred but alive. A horror movie might revolve around hoping that the people involved don’t get horribly murdered, but it also relies on the audience feeling just a little bit happy when they do. If you feel a deep connection to your character, then when something bad happens to them, you’re disappointed. Not terrified, just bummed out, which isn’t what horror is looking for.

Characters in The Final Girl start off about a half-step above NPCs. It’s honestly hard to care too much about the first few kills, because mostly all they have to distinguish themselves is the potential to develop into a real character. But, after the first few killings, whoever survived has seen a little character development. Now they’re real characters, and when they die, something of value has been wrenched from the game. But not something so valuable that you won’t want to play anymore.

To put it another way, by giving the players extra characters to play and making them switch between them often, The Final Girl eventually establishes a particular emotional distance between player and character. It’s the same emotional distance that has moviegoers shout “Don’t go in there!” at the screen, but want to keep watching even when the heroes keep making bad decisions. It takes a while to reach this point, but by hacking multiple, shared characters into a game with more robust character creation, you’ll get there much more quickly.

The Final Girl is an imperfect game, but it’s a shame that it’s off the market entirely. Its faults are fixable, and when it works, it works really well. That said, the lessons of The Final Girl are adaptable. Fiasco makes an excellent base, but it’s worth experimenting with all the story games in your library, even the ones that seem like an odd match. The point is, you don’t need a strong GM and weak players to make your horror story work. You just need a few simple techniques to keep the tension high.

BOO!
“They found the Sphere of Annihilation! That’s my cue!”
Jump to Comments

Comments on Making Your Story Games Horrifying (in the Good Way)