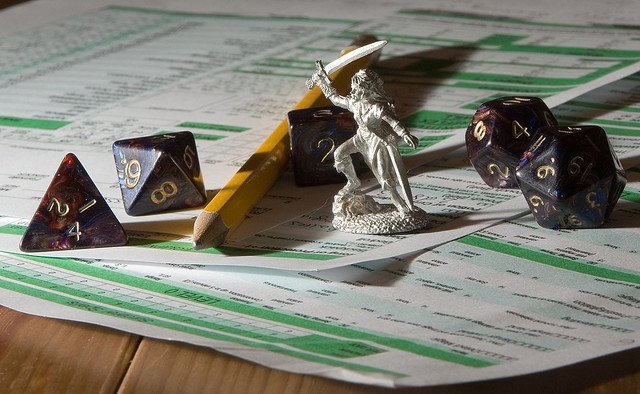 Making a new character that you find fun to roleplay can be a lengthy process for many players. You want to have an interesting personality, a backstory to give a hook for adventuring, and something that helps you stand out from the stereotype of your race/class combo.

So what can you do if your game master pulls your group together for a new campaign without warning or time to prep? I’ve seen some players become frustrated or nervous because they don’t have time to get a feel for a new character. This is even worse if you are using a rules system that has a lengthy process for creating a character’s game mechanics. To help overcome this hurdle, here are a few tips to for speeding up your character creation.

Find the hole in the group

If you aren’t sure what kind of hero to play, ask what the rest of your group is planning to do. If there is a noticeable component of the group missing, like a rogue to handle traps, a cleric to heal wounds, or a fighter to protect the front, volunteer to fill that gap.

If your focus is making a character you find compelling to play and tell a story with, you will want to focus your prep time on story elements over the mechanics. Most rules systems show samples of a default, or archetypal, build for a character class. This will allow you to quickly fill out your character sheet and move beyond the rules aspect of character creation. This can be especially useful if your are playing a class that you are less familiar with. More often than not, the time spent creating personality and motivations will be more rewarding than time spent optimizing feat trees and melee weapon types for your first level fighter.

Choose an alignment to play 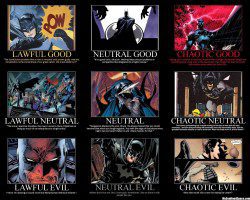 The classic Dungeons and Dragons alignment system is a great starting point for thinking of how your character will behave during the campaign. There are two dimensions to an alignment: Good/Neutral/Evil, and Chaotic/Neutral/Lawful. Don’t go into the game with the idea that your chosen alignment should strictly dictate every decision you make, though. Aside from a few exceptions where rules become heavily entangled with alignment choice, you should look at your alignment as a guide to what your character’s preferred course of action will be in ideal situations. With the complexity that two to four other players bring, and dilemmas that your game master can create for you, it’s likely that you will have to roleplay compromises to your alignment more often than not, which itself creates more interesting narratives for your character.

Outline a background for your hero

Some players will write dozens of pages for their character backgrounds, but if you’re using these tips you don’t have time for that! Instead, outline a few basics that can get you started. Did your character grow up in an urban, rural, or perhaps wilderness environment? Is their current profession something they trained for, or just fell into? Do they embrace the customs of their upbringing and values of their home community, or rebel against them? A further shortcut to thinking about some of these formative issues is to compare your character’s alignment to that of the community they grew up in.

Everyone has deeply held beliefs about the world that they act on, and your character should be no different. A seasoned warrior may hold the belief that “The strong must protect the weak,” the suspicious rogue that “Nobody makes a sacrifice without expecting a payoff later,” and the absent minded mage that “All matters in life are trivial compared to the pursuit of arcane knowledge.” Make sure that your character’s beliefs don’t clash with their alignment. It does not make sense for the chaotic neutral bard to believe that “Loyalty to companions is one’s first duty.” Backgrounds and (for divine characters especially) deities can have a big influence on beliefs. Whatever direction your take, keep it succinct. A one sentence statement will be much easier to remember and act on in the middle of your game than an essay on the ethics of dungeon delving.

Look for motivations that will keep you adventuring

Finally, decide on the driving motivation behind your character’s choice to be an adventurer. Does it seem like an easy way to get rich and retire young? Do they have something to prove to an influential contact or rival? Maybe they seek to hone their skills and gain allies to fulfill an oath of vengeance. Whatever it is that motivates your character, it should be strong enough that they are willing to put themselves at great risk to advance their goals, and long term enough that you can justify taking adventures that have a very indirect contribution to your character’s ultimate aim.

Making a character that you want to explore with session after session is, for many gamers, the most rewarding and memorable part of tabletop roleplaying. But even if you don’t have a lot of time to prepare, you can still make a character well worth playing.