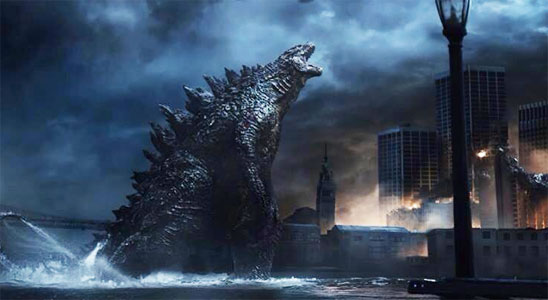 Gareth Edwards’ newest addition to the Godzilla franchise is out, and it’s a wonderful example of the right way to make a monster movie. At its worst, a remake exploits the audience’s passing familiarity of the property to cash in with big blockbuster special effects, thereby blatantly missing what made the original great. But this Godzilla demonstrates the best of Hollywood’s obsession with remaking iconic films. Avoiding the mistakes made by Japanese and American studios alike, Edwards uses the latest visual effects technology not as substitute for the property’s substance, but a tool for enhancement.

There have been 29 films featuring Godzilla, so trying to say anything about its essential themes must necessarily skip over a lot of film history. However, almost every origin story uses Godzilla as a representation for something that has threatened or scarred the cultural psyche. Many of the films have been lighthearted, and a number have been campy in ways both unintentional and bad. But the best, scariest ones use either Godzilla or his opponent as a metaphor for a real world threat. The monster is a representation of the atomic bomb, economic calamity, or even pollution. While human characters often take their place on stage as secondary heroes and villains, most people in a Godzilla movie are bystanders: small, helpless, their fate in the hands of greater powers. That’s the type of Godzilla that is the most interesting to talk about, and the type that was used in this summer’s release.

I absolutely love how the Godzilla franchise utilizes these themes, and instead of a standard review, I’ll be going through elements that highlight how this Godzilla remake successfully uses them. As a review shorthand I’ll say this: if you are a fan of monster movies, you will enjoy Godzilla; if you are a fan of big special effects that don’t sacrifice substance, you will enjoy Godzilla. Now consider yourself warned: if you want to see Godzilla unspoiled, bookmark this page for later and go watch the movie*. If you’ve already seen Godzilla or you don’t mind spoilers, forge ahead.

The trailer suggests that the plot is about a government conspiracy to hide the existence of Godzilla. The focus of the trailer is Joe Brody (played by Bryan Cranston) and his urgent need to reveal the truth. I came into the theater somewhat skeptical of how Joe and his son Ford (Aaron Taylor-Johnson) could be set up as civilian protagonists with a personal stake in discovering and killing Godzilla. Interestingly enough, the movie uses this plot line only through the first act, in order to get the main characters in place and delay the monster’s full appearance. The writing has more nuance than expected for a government conspiracy hook, the pacing isn’t hurried, and the acting really pulls you in. Bryan Cranston’s emotional performance as a grieving husband is key to selling it. 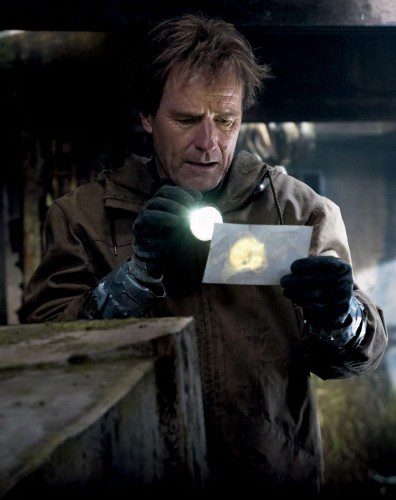 After breaking into the quarantine zone, Joe finds a family photo in his old house. This is the first time he’s seen a picture of his wife since the disaster that killed her.

The initial attack on the Japanese power plant that revealed the existence of an unknown, uncontrollable threat to Joe is fifteen years prior to the main plot line. This allows plenty of time for guilt and unanswered questions to drive him mad. The Brodys are the some of the first victims of this unseen threat, and it gives us glimpse into the long term effects of the helplessness caused by the kaiju. Joe was never able to see the monster that destroyed his plant and caused his wife’s death. There was nothing either of them could have done to change the outcome of that day. And without understanding what caused the disaster, those questions nag at Joe for fifteen years.

His son Ford, in the meantime, has moved on with his life, starting a successful career as a Navy officer and raising a family of his own. Ford resents his father’s quest for answers because it is becoming a burden on them all. Their accidental discovery of the truth, prior to the first MUTO breaking free of the power plant’s wreckage, allows their relationship to heal. This more personal story arc concludes with Joe’s death. Ford doesn’t share his father’s drive for revenge, but as a result of helping his father one last time, he is stuck in the middle of the action while trying desperately to get back to his family in San Francisco. 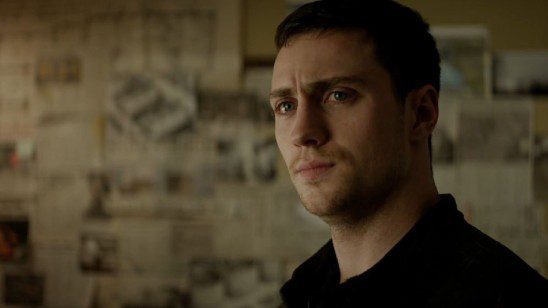 Ford’s role in the plot gives the audience a personal attachment that helps guide them through the story and care what is happening to those underfoot, without distracting from the movie’s monster focus. Ford is not an action hero; he isn’t hunting the MUTOs or Godzilla. He’s just an off-duty soldier trying to get back to his family, and a father trying to keep them safe. But circumstances – like three monsters converging on his home city – keep dragging him back into the plot. 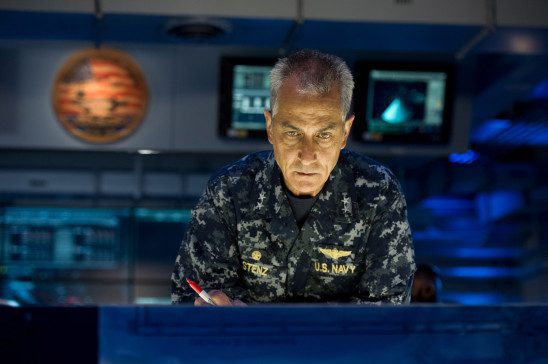 Admiral Stenz is not the usual bullheaded military leader seen in monster movies.

Godzilla gives Ford and the rest of the military characters a very fair representation. The soldiers on screen are professional, dedicated, and confident without being jerks. They are men (unfortunately not many women in uniform were present) doing the best they can with the tools and training they have, in the face of otherworldly circumstances. Forced to defend densely packed cities, they do their best to be aware of civilians, such as the moment when an evacuating school bus drives in front of a squad that immediately ceases fire and points their barrels down. This doesn’t mean they can’t be fallible when Godzilla is up in their faces, though – at one point, a tank flattens a car while attempting to retreat. 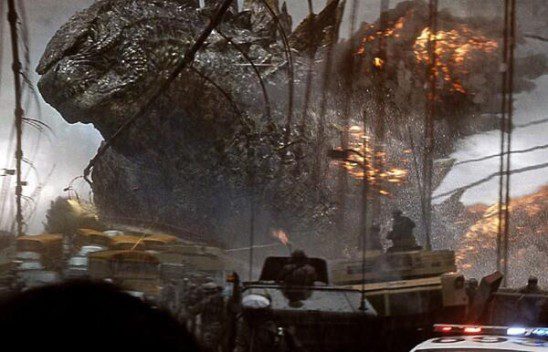 Ultimately, despite their advantages, the soldiers, sailors, and airmen are as helpless as the civilians they’re protecting, and I am impressed that Godzilla manages to portray them as competent and professional in that context. As someone who enjoys media that succeeds in representing militaries well, be they real or fictional, that gives the movies bonus points for me. But it also strengthens the tension that the movie is building. These aren’t caricatures of soldiers, too incompetent or stubborn to handle a new threat. They are doing the best that anyone could ask of them and putting their lives in immediate danger for the people they’re trying to protect, and it’s pretty much futile. Soldier or civilian, everyone has lost control, and luck is the only thing that separates life from death when the MUTO comes to town.

That’s because, of course, the only real players in this are the monsters. Godzilla and the MUTOs have their own agendas, and most of the time, humans are about as interesting to them as mice or insects are to us. For the first two acts, we have limited or no visibility into the actions of Godzilla and the MUTOs. We only see what’s happening blocks away from the action, where panicking crowds are scrambling to survive the collateral damage that’s turned urban centers into death traps. The camera only shows up to the scene of disaster belatedly, allowing us to survey the path of destruction after the monster has already left. This captures the essence of the classic, serious kaiju films and allows the tension to continually ratchet up through the second act. It also drives home that when caught underfoot, we are helpless against the gods in the playground. The destruction is so sudden and complete, it’s impossible to stay out of its way.

During the transition of the monsters from the shadows into full, horrifying view, we are treated to our first glimpse as a short piece of video is broadcast over cable news. MUTO is jumping up and down on Godzilla’s back while he thrashes about. Ford’s son watches the news feed, wide eyed, before asking his mom about the dinosaurs on the TV. From that distance, it’s absurd looking, and serves as a momentary relief of tension. I think this silly moment helps tie the movie together in two ways. First, it’s a foil for when we get an up close look at the monsters battling. In comparison to the purposefully laugh out loud cable news moment, everything else will seem more intense.

More importantly though, it lampshades the frequent ridiculousness of the Japanese Godzilla films. During most of his films, Godzilla has fought other monstrous creatures, aliens, or robots. Sometimes they’re driven to attack by natural instincts, aliens, psychics, or time travelers. In these movies, Godzilla is the only thing that can save Japan.

It doesn’t seem like it at first, but this film follows that tradition. Dr. Ishiro Serizawa (Ken Watanabe) repeatedly voices the dissenting idea that the natural order is greater than mankind. This is the viewpoint supported by the narrative, and it reveals the greater threat that Godzilla and the MUTOS represent in this film: our own arrogance in regards to nature. If we don’t learn our humble place in the natural order, we are in for a rude awakening. To survive, we need to rely on natural forces, rather than resist them. “Let them fight,” he says, suggesting that Godzilla can kill the MUTOs, and when he has done so, he will return to dormancy. 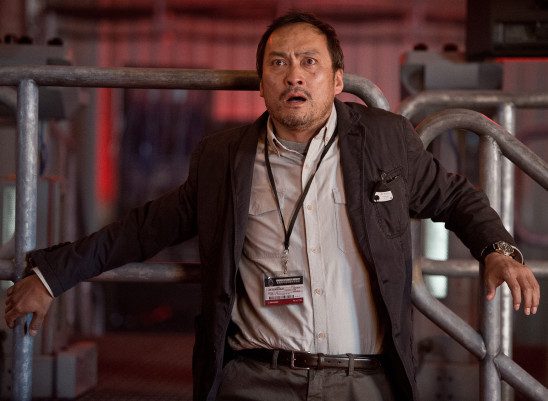 This character seemed a bit naïve to me, even though I knew he was going to end up being correct. That impression is tempered by his background. He has spent decades studying Godzilla and the first MUTO, and he is convinced that a nuclear blast is not guaranteed to kill them. The impact of the line “Let them fight” only grows as the conflict approaches San Francisco, and the focus transitions from abstract and mysterious to up close and terrifying.

In the end, although there is a great loss of life, the MUTOS are killed by Godzilla, and the nuclear warhead that Dr. Serizawa counselled against is detonated a safe distance offshore. San Francisco is in ruins, but most of the population has survived, and rescue operations are proceeding. Godzilla picks himself up and recedes into the sea, as predicted. With his exit, the sheer existential terror and powerlessness also recedes, and we are left with the hope that we can survive and rebuild. 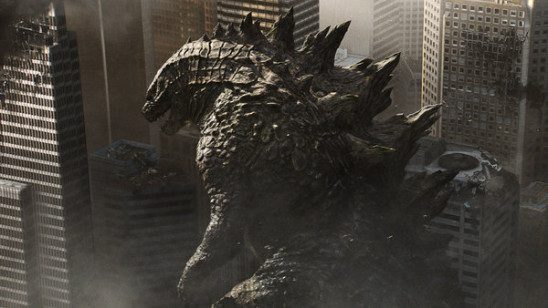 In the past decade, there has been an upswing in the popularity of stories about dystopias, zombies, and post-apocalyptic scenarios. The tone of popular media is often driven by cultural attitudes, and in our current case, it’s a sign of unease over things like economic instability and the rising likelihood of climate disasters. While the specific circumstances differ significantly, our situation has close enough psychological parallels to post-war Japan that this successful remake of Godzilla is able to tap into our current fears, while simultaneously holding the classic themes that make Godzilla the most famous of all Kaiju.

I recommend seeing it at whichever local theater has the best sound system.