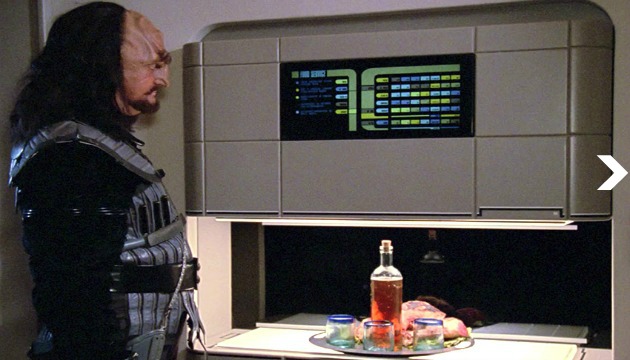 Star Trek: The Next Generation introduced an amazing piece of technology, the replicator. These devices work by the same principle as transporters – making matter out of energy (or reorganizing existing matter into new forms, depending on which technical specs you’re reading). They were mainly added as a curiosity, something that would allow the show to use futuristic special effects on a regular basis. From time to time the writers used them for plot-critical points, to produce whatever material or McGuffin was needed to move the plot forward.

The show never tackled just how much replicators would change lives and culture. The writers would have characters invite someone to their quarters for a home-cooked dinner, as if they were going to take steps more involved than asking the computer to materialize a pot roast from thin air.*

When we add new technology into our day-to-day lives it changes what we do, how we prioritize, even how we think about the tasks that technology is used for. If replicators were invented tomorrow, what problems would they solve for us, what aspects of our lives would be changed? Answering these sorts of questions takes worldbuilding to the next level.

Vegetarianism has been growing in popularity for the past several decades. More restaurants offer vegetarian or vegan options than ever before. And while some are motivated by the belief that a vegetarian diet is healthier, many people cite either environmental or animal welfare concerns as the top reason for a vegetarian diet. Those concerns disappear when replicators are involved. A replicated steak was never part of a cow, and the only impact is the energy it takes to produce. No death or mistreatment of animals* required.

The modern food industry has all sorts of creative ways to preserve its products and prolong shelf lives. From the basics of drying and flaking herbs and spices, to adding partially hydrogenated oil, we make sacrifices to quality for longevity’s sake. But when we can replicate food there’s no reason not to set all ingredients to “fresh.” Why replicate curry with dried basil and chili powder when you can replicate fresh basil leaves and chilies?

Food allergies or sensitivities are a nuisance for some and potentially deadly for others. Once we can replicate food, it should be easy to eliminate the risks associated with them. Identify the particular protein that triggers a peanut allergy, and you can safely enjoy peanut butter by excluding it during replication. Sure this may change the taste or texture slightly, but it would be much closer than conventional substitutes.

Of course replicating our food may bring out new problems. Today we see plenty of concern trolls raising alarm bells about food production and processing that betray their scientific illiteracy.* The Food Babes of the future may decide that food which isn’t grown is somehow unwholesome for you.* Big Replicator could replace Big Agro as the villain that is supposedly poisoning the world.

Replicators would revolutionize waste disposal. We could say goodbye to separating recyclables and compostables. No more landfills or incinerators either. All of our trash simply gets put back in the replicator and broken back down to its component atoms.

Replicators could also be used to remove pollution by acting like a water or air filter. Pump air or water into one side of the replicator, dematerialize any pollutants and toxins, then pump it out the other side. The pollution is converted into energy and stored for future replication. Purifying water supplies and reducing greenhouse gases to safe levels would become simple. The only factor to consider is how many replicators would be needed to accomplish it quickly.

Even how we consume goods would be transformed by replicators. There would be a shift from paying for ownership to paying for access. We are already seeing a shift to an access economy for entertainment with services like Netflix and Hulu. With replicators we will see this happen for physical goods as well.

Instead of needing to own a set of dishes, they can be replicated with the food in question. So people won’t need to spend time deciding which dish set fits their everyday style or is fancy enough to pull out for special occasions. Rather than purchasing your dishes and being locked into that one expensive choice, you can pay for access to a multitude of dish patterns that can be selected to go with a particular meal. Having ownership of physical objects will seem a quaint notion when you have the ability to create them on demand.

The ability to convert energy into matter in a highly controlled way would push a society a significant distance towards a post scarcity economy. Foods, construction materials, and luxury goods would all be available instantly so long as you have enough energy to replicate them. That of course assumes that the society with the replicator technology also has the energy needed to use them on demand.

In Star Trek, replicators are powered by fusion reactors. When a starship is operating at peak efficiency, the energy demand of the replicators is negligible compared to the rest of the ship’s systems. But what if the society operating the replicators doesn’t have access to such a massive power source?

Energy would then become the source of scarcity that limits the impact replicators would have on society. Energy prices would rise until replication reached an equilibrium with traditional means of production.* This would allow people of means to have instant access to goods, but the price inflation of energy would make it even harder for society’s poorest to afford electricity and heat without government regulation of energy prices.

The Limits of Space

But assuming that energy production keeps up with the needs of replicator technology, there would still be a use for money and private ownership. If you want a large home, a collection of classic cars, or a private plane, where can you put it? The further you go from city centers, the easier it is to find unused land that you can reshape to your heart’s content. But what if you want your mansion to be in the heart of your favorite city?

Star Trek has gotten rid of currency; for goods and services they have a post-scarcity economy. This works just fine for the characters we watch – their living quarters are assigned by Starfleet. For private citizens, though, how can one move to a larger apartment or build a dream home by the beach? Land that can be privately owned will always be a scarce resource, no matter what other goods you can create from thin air. And that means that there will be either rationing by a government entity, which we can infer happens in the Federation, or the continuation of a financial system within society.

As we can see, replicators would bring about many economic and social transformations. These are first-order changes, the direct impacts that this technology would have on society when it is available. But when worldbuilding and writing, we can also explore the more subtle, indirect changes that new technologies have.

The average American spends about 10 hours per week shopping, cooking, and cleaning up. What impact would that have on how we live our lives if we could suddenly get that time for leisure or creative ventures? How much would that time be worth to us if the energy to use the technology was limited? The effects of a major technological innovation are profound and creep into many aspects of our lives that we wouldn’t predict when the technology is first introduced.* Play in your world for a while, and explore what these implications might be.

And if the pot roast was burnt why wouldn’t you just immediately recycle it and try again? I’m looking at you Janeway.
Or the people who work in the meat processing plants.
Be wary of anyone who tells you to cut all “chemicals” out of your diet. Literally all food is composed of chemicals.
TNG has a light sprinkling of this, but it’s more a criticism of the taste than a concern that replicated food is inherently bad for you.
Unlike today, however, oil would not necessarily be what is in demand. Electricity from the grid, not fuel for engines, would be what is needed for replicators.
In the days before Facebook and Twitter, who would have guessed that a primary use of the internet would be what we now call social media?

Comments on Implications of Replicator Technology