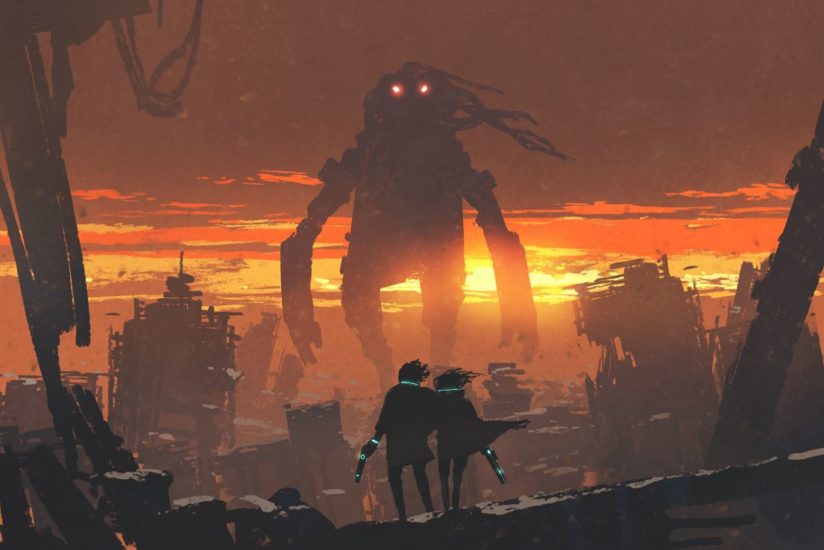 When we discuss flaws in the stories we love, defensive reactions are a constant companion. There’s nothing wrong with feeling defensive; those feelings are natural and involuntary. But when defensiveness makes our choices for us, it becomes impossible to make our stories, ourselves, and our world better.

Today, a defensive mindset is so pervasive that it can be difficult to imagine how it might be different. While defensive feelings may never disappear entirely, we can still work toward a culture that encourages us to lower our shields and listen.

We don’t get defensive every time someone brings up problems or criticizes our work. Defensiveness occurs when criticism feels threatening. In many cases, we feel threatened because we’re reading more into the criticism than is actually present.

For example, let’s say someone tells you: “Your novel uses the damsel in distress trope, which is a sexist cliché.”

We may not be consciously aware that we’re taking away these messages. Our subconscious can make this connection and produce defensive emotions, leaving us fumbling to find where our feelings are coming from.

But here’s the thing: that jump from “this trope is bad” to “you’re a worthless person” isn’t spontaneously generated by our psyches. The association was placed there. Cultural messages play a large role in creating a sense of threat to our self-worth.

How a Binary Mindset Creates a Defensive Cycle

To a greater or lesser degree, we’re all caught in a binary mindset in which stories are either perfect or trash. This mindset comes from many places, but in the arts, a significant contributor is the worship of supposed masterpieces. Classic works are put on a pedestal, and current works are dismissed by comparing them unfavorably to these classics. This tells artists of all stripes that we have to reach perfection to be taken seriously, and this state of perfection isn’t even real. Classics are full of flaws; people with power have simply agreed to ignore them.

Similarly, literary culture is steeped in Romanticism, which includes the idea that storytelling can’t be learned. Many literary professors really think that people have to be naturally talented to be writers, probably because these professors don’t teach anything. For a writer who believes this, even subconsciously, the stakes for each story are through the roof. If their story uses too many bad tropes, that could mean they have no personal potential.

Even outside of literary circles, bestsellers are often a replacement for masterpieces. Fans often insist that because a book sold well, it must be perfect in every way. Of course, many of these statements are defensive reactions that weren’t thought out. Regardless, this argument should be considered too laughable for even a knee-jerk reaction. It’s used because many people buy into it at some level.

As for social justice, most people still think that expressing any form of bigotry, ever, means they are akin to a member of the KKK or an MRA. This is the natural result of believing that a person is either an ally or a hatemonger. While extremists are very real, bigotry usually operates like any other subconscious cultural influence. Because of this, every human old enough to talk has said something bigoted at one point or another, often without knowing it. We learn to stop harming others by listening to them and changing our ways.

This binary mindset traps us in a defensive cycle:

It’s impractical to pretend that all stories are of equal quality or that storytelling is completely subjective. That’s just another way to dismiss problems and avoid making improvements. But story quality isn’t binary; it falls on a scale from high to low, and even putting it on that scale is reductive. Every story contains a collection of elements that have their own strengths and flaws, and every person will have a unique experience with a story.

How We Can Do Better

Since the problem is embedded in our culture, it won’t be easy to fix. But every step we take toward the solution makes it easier for others to do the same.

The first step to lowering defensive barriers is to normalize making mistakes and finding flaws. When we think we are alone in doing something wrong, we’re especially likely to feel threatened. But this is rarely true: any mistake we make is almost certainly being made by others. Conversely, I can’t count the times I’ve been fed up with other people for doing something and then caught myself doing it. It’s a humbling experience that I recommend for everyone. We’re all human.

In practice, we can normalize flaws by sharing our own foibles and simply telling people mistakes are common. When writing articles, I’ve started using “we” more often to demonstrate this. If I’m writing about a mistake, I’ve probably done it.

Break the Perfection vs Trash Binary

A standard practice when giving feedback is to start with praise. This validates the receiver so they are less likely to feel threatened by criticism. It also communicates that just because their work has flaws doesn’t mean it’s worthless.

At Mythcreants, we criticize popular works and follow a general principle of “no story is perfect” to break that binary. Conversely, when I covered The Eye of Argon, which has been labeled “the worst story ever written,” I focused on its strengths.*

We also do our best to explain our positions on stories by giving specifics about the story. Many critics will dismiss works with pejoratives such as “derivative,” as though using the pejorative excuses them from giving any explanation for why they felt a work was low quality. This sends the message that if a story fails to measure up to a subjective standard, it can be dismissed as trash.

As storytellers, we’re primarily concerned with how large groups of people will react to fictional events. We may find it difficult to keep this in mind while recognizing that every individual’s reaction is valid, even when it deviates significantly from the norm. But both perspectives are necessary.

As for storytellers, we need to accept a reader’s experience but also view it as one data point among many. Each reader reacts the way they do for a reason, but that doesn’t mean their reaction defines our story. This encourages us to consider revisions while making reader reactions feel less threatening.

This is one reason “the author is dead” approach to story analysis is important. If there is no word of god on what a story means, we’re forced to look at the text, find evidence for our interpretation, and often recognize that the text could mean different things.

It’s much easier for us to avoid feeling threatened when the person making a critique is calm, polite, and arguing in good faith, but that isn’t always the case. The world is full of upsetting things, and society has no shortage of assholes.

I have no magic spell for banishing toxic people. However, recognizing when someone is going too far can help us deal with it, whether that means disengaging, setting boundaries, or simply reassuring ourselves. You’ll know a critic is out of line if they:

However, someone is rarely being an asshole if they are venting about problematic material that personally harms them. That would make anyone in their position upset, and when people are upset, they do things like exaggerate, imitate, and use harsh language. When someone talks to us this way, our job is to listen and let them vent. If we feel they are being rude or unfair, we’ve gotta let it go. They shouldn’t have to deal with systemic oppression and coddle our feelings about it.

Making problematic mistakes and being called out for them doesn’t mean we’re wearing pointy white hoods. It means we’re flawed human beings. What matters in these moments is our willingness to consider the other person’s viewpoint, do research on the issue, and make changes if they’re called for. In many cases, a person who’s venting will feel better once they realize we’re listening.

When we find problematic material that’s upsetting but doesn’t harm us personally, we have a responsibility to educate. While venting at our fellow privileged people is better than staying silent, they will be more likely to listen if we put in the emotional labor required to stay calm and patient. If we do that, a marginalized person may not have to.

We all feel defensive sometimes. Once we recognize it, we know it’s a good time to take a break, wait for our feelings to level, and examine the situation with a fresh perspective.

Some of those strengths were jokes, but many of them weren’t.

Comments on How We Can Beat Defensiveness