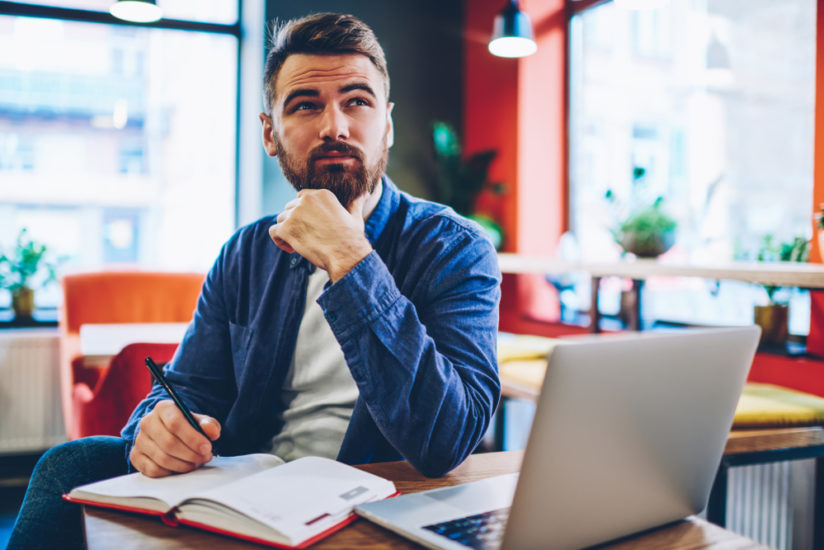 We imagine Dave Lerner looked like this as he wrote these rules.

Numerous writers have attempted to codify their principles into a small number of easy-to-understand rules. In previous posts we have discussed the usefulness of rules given by Kurt Vonnegut, Neil Gaiman, and Elmore Leonard.

Unfortunately, we have discovered that just because one is a skilled writer, that does not mean they can articulate the reasons for their success. Figuring that the skill, quality, success, and professionalism of a given writer may have an inverse relationship to their ability to sum up useful rules for writing, we have asked our own Dave Lerner to weigh in.

The editors here at Mythcreants have asked me to give you some rules on how to write better. They have over two hundred posts on writing, but they want me to teach you everything you need to know in eight rules.

Turned out to be easier than I thought. So easy, as it happens, that I provided a bonus tip for each rule. No need to thank me. On second thought, yeah. Thank me.

The first rule makes sense. If you write better, then the stuff you write will be better. Try it. You’ll be surprised at how much better your writing will be if you would just write better.

Conclusion: If you follow this rule you will be a better writer. Therefore, it is very useful.

Write at least one sentence every day. ‘This is my daily sentence.’ is a good sentence. So write that sentence. Every day.

The second rule discusses basic process advice. It is simple and easy to follow. And if you write this sentence every day, then after thirty years you will have written over 50,000 words. That’s a novel.

Conclusion: This rule can be useful if you want to write a novel. But you do need patience for it to work.

Bonus Tip: If you write on leap day, you’ll get five extra words.

If you truly wish to be a writer, then you must live in a cheap garret in Paris during the 1920s.

This is a fact. I’m sorry. I don’t make the rules. Well, actually, I am making these rules. But this one is true nonetheless.

Conclusion: You may not be able to follow this rule, but knowing it will help you acclimatize yourself to your situation. In that way, it is useful.

Conflict is important. So have a character punch another character in the face every two to four paragraphs.

This is a good rule. Too many stories fail to have sufficient conflict. Following this rule will ensure plenty of conflict. You can always come up with a reason for the punch in a later paragraph.

Conclusion: This rule is useful for maintaining a decent level of conflict.

Bonus Tip: It doesn’t always have to be a punch. Kicks, headbutts, bites, etc., will give you conflict and variety.

If you are about to write an epic novel that’ll be over 100,000 words long, remember that it’s probably okay if you repeat a couple of words.

Conclusion: Basically necessary if you want to write an epic novel that’ll be over 100,000 words long.

Bonus Tip: If it’s fantasy, you can make up your own words. You won’t even need vowels. But you will need apostrophes.

As you probably know, murder by one’s own characters is the second leading cause of author deaths, right after form rejection letters.

Conclusion: This rule will literally save your life. Very useful!

Bonus Tip: If you can’t help but write vivid characters, make them wimps you can beat in a fight.

It’s about time that somebody made this rule! Far too many people are writing without me in mind. While some of these stories may be “good,” if they’re not for me, then they are absolute garbage.

Conclusion: This rule is very useful. Essential, even.

Give your editors nice compliments. For instance, I mention here that Oren Ashkenazi and Chris Winkle are both highly intelligent, insightful, and all-around generally nice people, and incredibly good-looking to boot, thus guaranteeing that they’ll love this piece.

Although this should be obvious, apparently many people don’t seem to know this. Editors are human* and appreciate a nice compliment. They would appreciate cash even more, but if you’re a real writer living in a garret in Paris in the 1920s, you don’t have any.

Conclusion: This rule will get you published anywhere. Perhaps the most useful rule of all.

Bonus Tip: Don’t be afraid of going too far. No editor will care or even notice if you’re over the top. Not even if they’re as amazingly sharp and intuitive as Oren Ashkenazi and Chris Winkle. Did I also mention that they’re both incredibly good-looking?

So my eight rules range from useful to very useful to essential to will literally save your life. And now you don’t need anything else on this site!

Well, it was worth a shot.

We may be stretching the definition of the word here.

Comments on How Useful Are Dave Lerner’s Eight Rules of Writing?