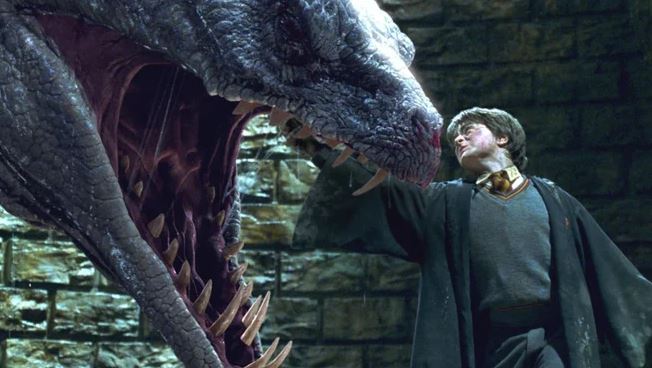 Over the years, we’ve received many questions about how to plot multiple books. The answer is surprisingly simple: story structure is the same no matter the scale. However, reader expectations about story continuity do change a little when the story is broken into different books, and we’ve rarely discussed large internal arcs. So let’s dive into this question more directly and examine the decisions that series writers need to make.

First, let’s review a few basics. The reason why the scale doesn’t make a difference to plot structure is that stories are fractals. If you aren’t familiar with fractals, you may have a little trouble wrapping your mind around them. Essentially, it means every story is composed of multiple smaller stories, and each of those smaller stories is made of even smaller stories, all the way down. All stories, big or small, have three components: a problem, a turning point, and a resolution.

Let’s take an example. If you’re writing a novel about a character’s quest to save their city, that character might spend the first chapter working to uncover what’s causing the city’s ills. As such, that chapter might open with a scene where they are personally threatened by the city’s problems and have to escape with their life. Each one of these stories has a distinct problem for the character to solve, though the smaller stories are building blocks for the bigger ones.

Because the mystery in that first chapter is a subdivision of the parent story about saving the city, we’d call that chapter a child story or a child arc. In turn, the first scene features a child arc of the chapter, which is also a grandchild of the book’s overall arc. You can use other family tree terms like sibling or ancestor to describe your plot’s hierarchy. If you have another story in the book that isn’t a subdivision of the quest to save the city, such as your character’s romance with a handsome newcomer, then that’s a subplot instead of a child plot.

Designing External Arcs for a Series

When discussing story structure, we usually focus on external arcs. These are arcs with stakes outside of the way your characters feel, such as whether the city will be saved or if your protagonist will survive their encounter with the city’s ills. External problems usually generate more tension and therefore provide a stronger scaffolding for your story. When deciding how closely connected your child stories will be, external problems count the most.

When plotting a novel, it’s usually assumed that most of the book’s tension will come from the throughline – the arc that holds the story together from start to finish. You can think of it as the trunk of the story’s family tree. While there are some exceptions, such as travel stories, generally readers expect the tree trunk to have the highest stakes, and each branch will be tightly connected to its siblings. So, after discovering the cause of the city’s ills, your protagonist will move right on to searching for a solution to save the city. They won’t travel to another city and look into the problems the other city has, because that’s not part of your novel’s throughline.

However, those expectations aren’t cemented for plots at the series level. Instead, they’re wide open, much like a TV show. That gives you a broader variety of options for connecting your novels together.

Some TV shows don’t have any story that carries from one episode to the next. A good example is Star Trek: The Next Generation. It’s made of separate, but similar, stories featuring the same set of characters on the same spaceship. Episodic series don’t have a series-level problem, turning point, and resolution to plan out. That means a novelist using an episodic format can add as many or as few stories to the series as they want. They also have more flexibility to make significant changes between books, such as swapping out the main character.

As for audience engagement, a highly episodic format has the advantage of letting the audience jump in anywhere without worrying what came before the current story. That makes it easier for new readers to get started. However, without a series throughline, existing readers don’t have as much reason to pick up the next book.

On the other end of the spectrum are TV shows that focus on one continuous story with less in the way of child arcs for each episode. Stranger Things is a good example of a continuous-arc show. A season of Stranger Things is held together much like a novel. Audiences had better start at the beginning, but once they start, they’re more likely to binge-watch the whole thing.

However, you might notice that while one episode leads right into the next, each season of Stranger Things ties up the story by the end, with a only a small hook left for the next season. The problem with focusing exclusively on a tense throughline is that the audience is strung along until it’s finished. If you make readers wait for the next book without resolving the most important arcs, they could get reasonably upset with you.*

Since authors don’t always finish novel series, a series with a continuous arc can leave readers to buy half a story hoping that someday they’ll be able to buy the other half. On top of that, readers often expect novels to be self-contained stories. If none of the important story arcs are resolved at the end of the first book, some readers will feel cheated.

While either end of this spectrum may be the right choice for you, at Mythcreants we generally recommend aiming for the middle. That means having significant child arcs for each book as well as a strong throughline that holds the series together. We often call this approach fractal structure, which is a little misleading because all plots are fractal. However, some stories still have a more defined family tree than others. When we recommend a fractal approach to series, we’re suggesting you pay special attention to developing strong arcs at multiple levels. This way, readers get some satisfaction at the end of each book, but they also have a reason to continue.

Our favorite example is the Harry Potter series. The series throughline is the threat of Voldemort, but during each book, Harry focuses on fighting one of Voldemort’s servants. Sometimes it’s not clear right away how the plot of a book is connected to Voldemort, but it’s always tied to him by the end. Similar to many TV show seasons, the series throughline becomes more present in each book as the series goes on until the final book is devoted to fighting Voldemort directly.

If you know what your series throughline will be but you’d like ideas for the child story in each book, see my article on Filling In Your Story’s Middle.

Internal arcs cover a character’s personal issues, such as overcoming a personality flaw. I’ll also characterize relationship arcs as internal arcs here, because they operate more like character arcs in this instance. Regardless of the type, internal arcs don’t provide as much tension, so they are less likely to be used as throughlines. Plus, it’s difficult to generate lots of story content about relationships or personal growth. If you stretch internal arcs too far, readers may find the lack of progress frustratingly slow and contrived.

That said, if you’re interested in creating a series that’s more on the episodic end of the spectrum, you can use the external arcs in each book for tension and add an internal throughline to tie them together a little more. A great example is Martha Wells’s The Murderbot Diaries, which have intense action sequences in each novella and a growth arc for the main character that’s more continuous. Because the first novella succeeds in creating high attachment to the main character, readers are motivated to continue the series even though the external arcs are wrapped up each time.

Since the pressure is off internal arcs to make the story run, they can be more episodic even if the series as a whole is more continuous. If your character faced their fears and came out ahead at the end of the first book, it’s okay to leave them victorious and start a new character arc for the second book. However, make sure the new arc doesn’t come out of nowhere.

By the end of every book, you’ll need to demonstrate that characters have made progress on their internal arcs. This means that while big character arcs can be very rewarding, it’s also tricky to get them to last for a whole series. Start by expanding the character arc into a bigger change.

However, be careful when crafting your character at the start of their journey. Don’t exaggerate their character flaw to the point where they are constantly unpleasant, hurting others physically or emotionally, or completely ineffective at solving problems. That will make them unlikable. If you give your character a strong aversion to something or someone, they’ll also need powerful motivation to help them work through it. Don’t let your protagonist run away from the plot.

The other trick for creating a long internal arc is simply to cut the arc into baby steps. Besides making it last longer, this might also make your arc more believable. One of most common mistakes storytellers make with internal arcs is rushing them. Consider how you might slow them down:

Does the Protagonist Have to Solve Their Problems?

We’ve gotten some questions about whether protagonists must outgrow their flaws, or if they can keep a flaw for a dozen books. The answer is that readers will interpret any significant problems you depict as plot hooks, and they will expect those issues to be resolved at some point. However, in many cases you don’t have to present a character flaw as a real problem.

Can the flaw also be turned into an advantage? Maybe your character is paranoid, and even though they push good people away sometimes, it also helps them find enemies in disguise. If the flaw helps the character as often as it hurts them, or it doesn’t actually hurt them, then it’s not really a flaw, it’s a quirk. You can keep it.

That is, unless it’s making your character unhappy. An unhappy character signals a problem just like the character’s poor judgment would. If your character has a permanent condition that causes them distress, like depression, make that clear. Readers will need to understand that this is an obstacle the character must continually deal with and not a personality flaw they’ll solve with time.

While your character may not outgrow their quirk or condition, remember to give them another internal arc in each book. Without that, readers will probably find the story’s emotional depth is lacking.

You don’t have to learn how to plot all over again when moving to larger stories; they use the same plotting techniques as smaller ones. However, if your story structure isn’t solid to begin with, it will become more obvious as you move up in size. If you don’t want your house to come tumbling down, take pride in every brick.

But just to be clear, harassing authors who haven’t finished their series is not okay.

Comments on How to Plot a Novel Series