Megamind understands the importance of a good entrance, but he's also a show-off

The seven deadly sins are classic examples of immorality, and it’s fun to bring them to life within your characters. However, storytellers can’t just tell the audience that a character embodies greed or lust; they need to show those traits in action. Characters exhibit them through their motives, methods, and flaws. Motive drives and defines, method determines modus operandi, and flaws give depth and a weakness to exploit. Here’s how each sin might manifest in your characters. 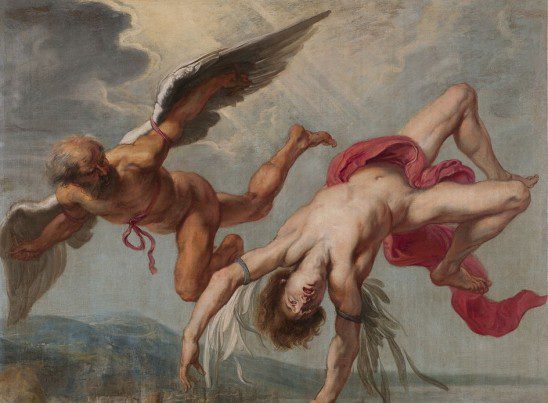 Icarus’ ill-fated flight is an old fable about the dangers of hubris. Image by Jacob Peter Gowy

Pride is an overabundance of confidence in one’s abilities or position. From a storytelling standpoint, it works well for villains and main characters because both have a place in the spotlight.

The proud seek to elevate themselves further. Perhaps they want to raise their social status and make everyone’s opinion match the way they view themselves. They could do this through persuasion, showboating, or hard work and practice.

The overconfident prioritize their own abilities. That means capitalizing on their perceived strengths; the charismatic rely on charm, whereas a renowned gunslinger would favor physical confrontation. However, the proud can be prone to delusions of grandeur. Just because someone thinks they’re awesome at tennis doesn’t mean they can actually play, and that can get them into trouble.

Proud characters are the center of their own universe, and many of them won’t perceive others that surround them. That means they won’t recognize what others bring to the table, causing them to leave teamwork out of their plans. Additionally, their hubris will prevent them from seeing their own faults, letting them barrel headfirst into failures and downfalls. Spirited Away’s Noface is a classic picture of unending hunger.

Classically, gluttony is overeating, but general over-consumption also fits the bill. Excess can be as varied as indulgences to revel in.

Comfort is a primary goal for the gluttonous. To achieve constant pampering, they’ll seek an overabundance of any item that’s pleasurable. They may exert uncomfortable effort but only when there’s something extravagant at the end of the road.

Gluttons rely on voluminous resources to accomplish goals. If a warlord needs to conquer a city, he’ll wait until he has more than enough forces to ensure victory. They will favor having too much over too little.

Waste is the most obvious side-effect of gluttony. Besides the collateral damage excess can cause, they’re likely to grab more than they can reasonably hold onto. They have eyes bigger than their stomach, as the old idiom goes. Those focused on their own hunger may do so at the expense of others. Bilbo requires a bit of convincing before undertaking the quest.

Inaction is a simple sin to portray. The unwilling hero is an old but popular archetype, and their unwillingness can be due to laziness. Their character arc can be finding the motivation they’re lacking.

A slothful character seeks to coast through life, doing nothing. Retirement is an obvious goal, as is any opportunity lucrative enough to excuse them from working for years after. That makes it easy to dangle a carrot in front of them.

Less means more is the motto of the slothful. Characters with this vice will try to achieve the most with the least effort. They might get other people to do their work for them, mooch off of what others earn, or live on ramen so they don’t have to get a job.

The lazy need to be pushed into action, and even then they may be obstinate or cut corners. They forgo effort that was necessary to achieve their ends, leading to unfortunate consequences. They can also miss opportunities they’d normally receive because they’re unwilling to make the effort. Storytellers will find it easy to impose hardship on the lazy but difficult to motivate them. Jabba’s advances towards Leia are one-sided

Lust is a complicated vice, as different cultures and worldviews have varying views on sexuality. What is taboo hinges on the setting and characters involved.

Hedonism is a big draw for the lustful. They’re similar to gluttons in that they’re overindulgent, but they focus on both physical and emotional pleasure, and that pleasure is usually dependent on others for fulfillment. However, sexuality is a wide spectrum with many different tastes.

Coercion, persuasion, and deception are likely behaviors because lust often requires others. The tactics a character uses, and how far they’re willing to go for fulfillment, will say a lot about them.

Those consumed by lust may not consider the opinions and wishes of others. Instead, they may seek to impose their will on them. Additionally, those who focus on pleasures of the flesh may neglect other aspects of their lives. 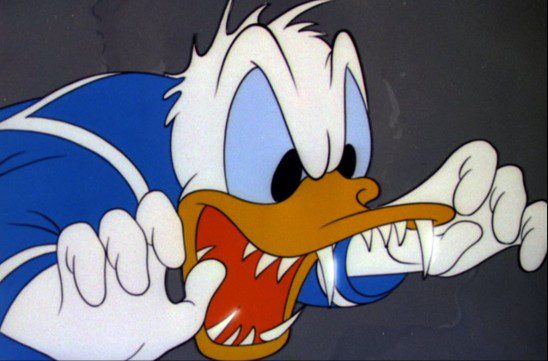 Donald Duck is known for having a foul and angry temperament

Wrathful people are more than just angry; they hold grudges and malicious intent towards anyone who upsets them. Their anger is disproportionate to whatever they perceive as having injured them.

The wrathful seek to act on or resolve the anger they feel. However, resolving anger isn’t necessarily destructive. They may seek a positive outlet, like a hobby that brings them peace or at least provides a distraction. On the other hand, they might seek to bring their enemies suffering and harm. They could be obsessed with returning any slight equally, if not worse. If they can’t punish whoever wronged them, they might find someone else to bully instead.

Brute force is an obvious choice for the wrathful. Others might coldly plan complicated schemes. Some could use words to wound their opponents emotionally. The path chosen hinges on the character in question, and the end goal is more important than the road they take.

People who abuse others will be disliked. By burning bridges, they’ll drive away support and opportunities. They’ll keep making enemies, and their vengeful behavior will alienate potential allies. The wrathful risk falling into a vicious cycle of aggression and isolation. Smaug and other dragons are notorious for hoarding

Similar to gluttony, greed is a sin rooted in excess. However, whereas gluttons focus on consumption and pleasure, the greedy focus on possessions and hoarding. Greed is about having and owning; gluttons won’t have a problem using what they have, but the greedy will be more interested in holding on and will be reluctant to spend their resources.

They simply want more, and what they gain is never enough. Some want more so they can show it off and gain prestige. Others see assets as a way to prepare for any problem.

The greedy feel having the most will lead to success. A strategist may focus on hoarding troops or resources, striking only when they’re certain of victory. A businessman may focus on obtaining resources merely for the sake of ensuring their competitors can’t use them. The type of resource they hoard will further determine the means they use.

Someone who focuses on possessions is likely to judge others solely on what they own, rather than recognizing other positive qualities. By definition, the greedy won’t be charitable, meaning others will be less likely to step in to help in times of need. Scar wants to rule for the sole reason of ruling and seems unconcerned with his kingdom’s well being.

The envious long for what others have. They become frustrated when they’re unable to get those things for themselves.

The grass is always greener on the other side. The envious don’t want the best; they want what someone else has. If an envious character achieves their heart’s desire, they’ll forget about it soon after, yearning for something they don’t have instead.

As the envious focus on the specific possessions of others, they are inclined toward theft. Depending on what they desire, that could be anything from seducing someone else’s spouse to taking credit for their work. Coercion – be it physical, legal, or verbal – may also bear fruit. If stymied or stuck, they may slash and burn what they can’t have.

If you’re looking at what everyone else has, you’ll be oblivious to your own resources. Characters stricken with envy won’t utilize their assets to the fullest extent. Instead, they’ll exert effort to take from others.

Views on immorality vary across cultures. If you’re creating a setting, you should think over how immorality is defined. Then match how your characters view and react to the seven sins with that definition. Their culturally informed opinions on what is sinful could inspire hatred and repression as well. Many atrocities started with the premise of punishing the wicked.