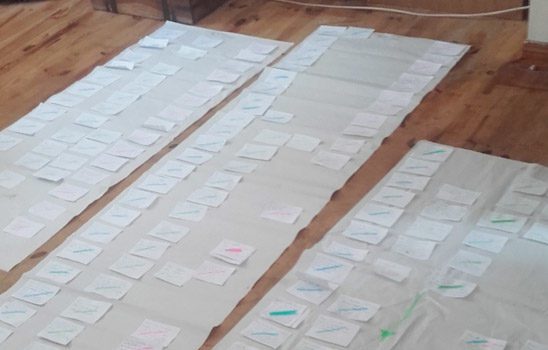 Outlining can help storytellers plan their story, evaluate story structure, and save on revisions. If you’ve never outlined a story before, don’t fret; it’s easy to get started.

Most storytellers outline before they write the first draft. This way they can review the story and revise it by changing their quick outline instead of rewriting whole pages. However, if you’re a discovery writer, you may not have a good feel for your story before writing your first draft. In that case, you can outline once your draft is done. Your outline will help you get a bird’s-eye view of your story and spot where it could use improvement. After you revise your outline, you can either revise your draft to match or dump your draft and write a new version based on your outline.

Outlining at Its Simplest

Simple outlines are a list of what happens in the story. Each item on the list should only summarize that event in brief so that you can glance through your outline quickly.

Compare this example of an outline and the rough story it’s for.*

Sergeant Banks’s livelihood went downhill with every meatball that splattered on the sidewalk. No one know where the persistent rain of meateors came from, but Banks was sure that someone had done it just to ruin his organic, grass-fed, hormone-free independent shop of the finest meat there ever was and ever would be.

Every day on his way to the shop, he witnessed another misguided soul eating the disgusting mix of mystery meat – right off the street! Then they had the gall to compare it to the deli meat he’d spent a lifetime perfecting. But oh no, he would not be taken in. He wouldn’t dignify it by taking a bite. Not one bite.

Banks hadn’t gone through ‘nam just to give up on the shop now. But a week after the meateors started falling, even his more devoted regulars stopped coming. He stood alone behind the counter, staring at the empty seats that had once been filled, watching his meager savings run dry.

So he put on his old plaid button-up, dusted off his leather shoes, and headed to the bank to ask for a loan. He just needed a little more time. A little more time, and everyone would realize his meat was the best meat.

But the white shirts and ties wouldn’t have it. All they would speak of was the “food revolution” and how he needed to join them.

But they didn’t believe him. The meateor garbage didn’t stop falling, and the stupid imbeciles he’d once called friends didn’t stop eating it.

What would he do? The shop had never made him fistfuls – perfection came at a cost. Now he was almost bankrupt. He’d have to close his shop – his dream! There was one more chance. He sold his radio and his typewriter, and he even got a few bucks for that thinking machine he’d never learned to use. He put everything he had on the lotto. If there was any good in this world, surely he would win and carry on.

But again lady fortune twisted her damned knife in his gut. Not one ticket he bought got him money – not one! He didn’t have anything left to pay the mortgage on his house or the lease on his shop. He was cast out, forsaken. Sure, people let him in, gave him shelter. But then they insulted him by slurping those falling balls of rot right in front of him! He told them a thing or two about what was wrong with that, and they always answered, “Maybe you should try it,” as though that had to do with anything. Sooner or later, he left, or they pointed at the door.

His clothes grew holes, his jacket wore thin, his glasses shattered, and his hat was run over by a semi and then splattered with oil. He begged on the road for coins to get by. But whenever he asked for food, they told him to eat the falling skymeat. “I’ll die first!” he told them. But his stomach grumbled day after day, until finally even his leather shoes looked good.

“Maybe just one bite,” he said to himself. “I need something in my stomach. This filthy meat ruined me; it might as well save me now.” He shambled up to a meateor that had just fallen and grabbed a soft handful of the mushy meat. He scrunched his eyes, held his nose, and opened his mouth.

And it was… savory, tender, juicy… it was incredible! It was the best thing he’d ever tasted! Except… well, it needed something. A little spice, some tang, a little smoke. It could be seared, to give it some texture.

He grabbed all the meat he could carry and raced to the nearest park grill. There was some charcoal left over. He fired it up and cooked some meateor. It filled the park with the delicious smoke, and soon other park goers were lined up to have some. They gobbled it all so fast! But that was okay, there was more lying on the grass. He ran out of charcoal but the diners brought more. Then they brought him spices, onions, mushrooms, buns. He mixed up his own barbecue sauce, and then he mixed up more because it ran out. The sun went down and the stars came out before the park grew quiet.

The next day the bankers in the white shirts and ties gave him a loan for his own grill and line of sauces. “Welcome to the food revolution!” they said.

If this is your first time outlining, you don’t need to make the process more complicated than that. But in case you’re ready for more, I’ll list some additional techniques you can use.

Sometimes, an ordered list of which character does what just can’t hold all the information you need for your story. Additional information could include:

This is just a sample of the information you might include in your outline. You can add whatever you need to write more productively.

If you want your story to follow a specific framework such as the hero’s or heroine’s journey, outlining can help you accomplish that. Just divide your list of events into the different stages of your structure.

The deli meat shop is going out of business because meat now falls from the sky.

Who Has This Problem?

Sergeant Banks, the owner of the shop and a war veteran. He’s a meat snob.

Why Does the Problem Matter to This Person?

Banks has had the shop for a long time and takes great pride in it.

What Holds Him Back from Solving the Problem?

Because the free meat threatens to make his work obsolete, he resentfully refuses to try it or otherwise adapt to his changing circumstances.

He tries to get a business loan but is turned down.

He bets all his money gambling but loses it all.

Living homeless on the street, he finally gets hungry enough to try the meat.

He loves the meat but decides it needs more spice and texture. His preparation of the meat is really popular, and he gets a new business doing that.

This format makes it easy to benchmark your story against the structure you’re working with and see if it fits. If you have lots of events under one headline and no events under another, it might be time to revise.

If you have a very long story like a novel, a flat list can grow to an unwieldy size. Plus, good novel structure usually includes story arcs at multiple levels. You could have a primary conflict for each scene, for each chapter those scenes are in, and for the entire book. Giving your list primary items and sub-items can help you represent this complex hierarchical structure.

Sergeant Banks’s meat business is made obsolete when free meat falls from the sky. After refusing to change his ways, he finally tries the new meat, likes it, and adapts his business.

Once you have enough layers, a bulleted list in a normal word processor can be hard to read. I recommend Workflowy for this type of outlining. It’s free, you can use it online or offline, and it allows you to expand or collapse the sub-list under each bullet.

Novel-sized works usually have more than one plot strand woven together. Secondary plotlines can include:

By default, events that fall under different plot threads will all be mixed together. That makes it difficult to examine your character arc or romance line without everything else in the way.

To view different threads, you can alter your outline in several different ways:

For my Meateor story example, I’ll say that I want to track elements that reoccur throughout the story, such as the events that encourage Banks to try the new meat.

If you’re writing a longer work and still getting used to pacing your narrative, it can be helpful to block scenes in your outline. Go through your events and decide which ones are important enough to be shown in a scene that unfolds in real time and which ones should be merely summarized. Then mark that in your outline.

For our example, I’ll say that I’m planning to expand the meateor story. Here’s what the first two scenes would look like blocked out.

Sergeant Banks Learns About the Meateors

One days Sergeant Banks is proudly getting his shop ready to open. He finally flips the open sign. Then huge meatballs start falling from the sky. His regulars come in splattered by the meat. One of them tastes it, and says it’s delicious. Banks refuses to try it but the rest of his regulars do. They all run out of the shop to eat more, without buying anything.

Summary: His shop empty, Banks stands firm. He is sure everyone will get tired of the new meat and come back to his superior product. But weeks pass and his shop is still empty. He realizes this if something isn’t done, he’ll have to close his doors.

Banks talks to a loan officer. He tries to convince the officer that the meat shop has run into some temporary trouble, and if he just gets a loan it will all get better. The loan officer tells Banks the meateors are the way of the future, and to stay in business, he needs to join the food revolution. Angry, Banks storms out, determined to get the money he needs another way.

Summary: Banks goes through all his possessions, grabbing and selling anything he can spare that’s worth money. It’s still not enough to keep the shop in business for long.

With a more fleshed-out format such as this one, it’s also easy to include other items like reminders and snippets.

Outlines exist to support a writer’s work process, and every writer works a little differently. That’s why outlines come in so many forms. If you use an outlining technique that isn’t mentioned here, tell me about it in the comments.

The structure of this story was created by all the Mythcreants volunteers during a meeting a couple years ago. Then because they demanded it, I pushed out a quick draft.