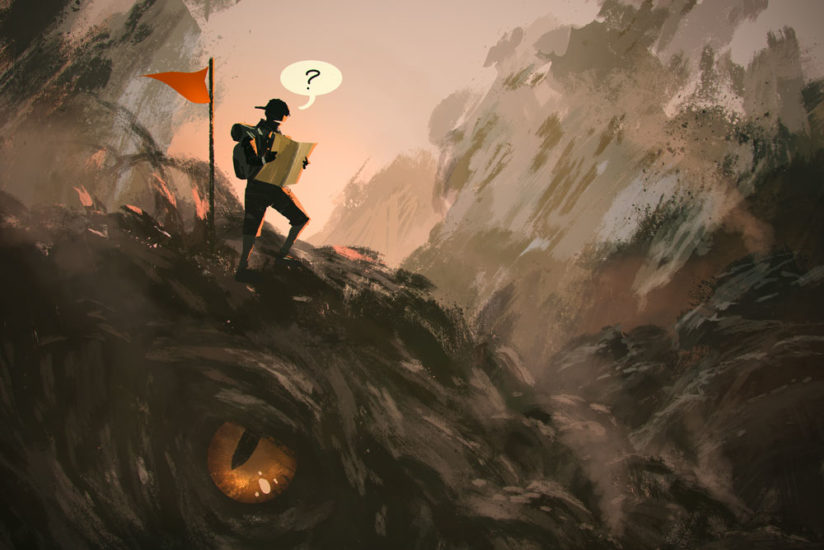 Sooner or later, most speculative fiction writers will hear from readers that something they did on purpose looks like a mistake. This is particularly likely when depicting something strange or ambiguous. At these times, it’s tempting to tell your readers, “I meant to do that,” or, “Just keep reading, it’ll be explained later.” But those aren’t the right responses, because whether readers interpret something as a mistake is within your control.

In most cases, readers will respond better once your intent is communicated more clearly. At Mythcreants, we refer to this process as sanctioning uncertainty. Happily, it’s usually quite simple. Let’s have a look.

Whether magic is happening around your character or they’re actually in a dream, you may want to depict supernatural events that are more subtle than a unicorn showing up in a space suit. But the more subtle you are, the more likely your choices are to be interpreted as errors. When that happens, you have to be more explicit that something unknown or remarkable is occurring.

Before: I pushed the button to buzz Michael in. As I hung up the phone, I heard a creak near the doorway. He was leaning against the frame, smirking at me.

After: I pushed the button to buzz Michael in. As I hung up the phone, I heard a creak near the doorway. He was leaning against the frame, smirking at me. How did he get in so fast? I guess he must have slipped into the building before he called me, the sly devil.

Putting a question in their thoughts works for many situations, but you can also be quicker and subtler. Insert words and phrases that indicate mystery, such as “somehow” or “for whatever reason.” Alternatively, you can emphasize the strange event enough to call attention to its peculiarity. After all, if someone jumped 20 feet in the air right in front of us, we would make a big deal out of it.

I pushed the button to buzz Michael in. As I hung up the phone, I heard a creak near the doorway. Somehow, he was already leaning against the frame, smirking at me. Damn, he was fast.

When the narration treats strange things as though they’re normal, that’s when readers become confused. Did they miss where you explained it earlier? Did you forget to explain or foreshadow it? As long as your narrator reacts naturally to what’s happening, readers will be on the same page with you.

Sometimes the way your viewpoint character thinks and behaves may seem baffling when, really, everything is unfolding according to your secret storyteller plan. Generally, this happens either because something like drugs or magic is influencing your character or because readers haven’t been told something important about the character.

Regardless of the cause, when it’s the viewpoint character’s thinking itself that’s strange, using thoughts to sanction uncertainty can be difficult. However, you still have a couple options for communicating that something is up.

First, the character might feel something unusual, even if they don’t know what it is or that it’s influencing their behavior at a deeper level.

As our hands touched, I caught Maya’s eyes. They flashed silver, or they seemed to – they couldn’t really be silver… could they? A wave of dizziness caught me unprepared, and I stumbled, bracing myself against the wall.

“I’m …. I’m sorry.” What had we been talking about? That’s right, I was supposed to tell her about the vault. It was rude to make her wait while I stumbled around. “The vault is at Greenway Bank, but I don’t have the key. Only Kit has that.”

She turned away, and my dizziness abruptly vanished. I straightened and blinked at her back as she disappeared through the doorway. I’d said goodbye to her, right? The end of our conversation was a blur.

Second, another character (or an omniscient narrator) can step in to call attention to what’s happening. Let’s say your character has depression, and as a result, things that seem like minor inconveniences to readers are upsetting to them. Your character doesn’t know they have depression yet. You could still use their thoughts for this – they could notice their emotional responses are different than the people they know, even if they don’t know why. However, it may be easier to clarify what’s behind their emotion if they talk about it with a friend. That friend might ask about how they’re feeling and gently suggest that a therapist or psychiatrist might help them feel better.

While the main character could be influenced by things they don’t know about, anything they do know about shouldn’t be mysterious. If you want to reveal they’re following a secret plan, any thoughts they have or actions they take while hiding it need to feel perfectly natural. That way there’s nothing to confuse readers. Even then, putting the character in genuine danger instead of bluffing that they’re in danger will probably make your story more engaging.

Now let’s say you want part of your story to be ambiguous, but readers are reporting that they’re confused. Don’t misinterpret this as a sign of success; confusion is not the experience you’re looking for. Making something ambiguous requires giving readers multiple options to choose from: plausible options that they fully understand.

This means that instead of asking open-ended questions like “what’s happening?” readers should be asking either/or questions. For instance, the movie Inception leaves viewers wondering “Did Dom Cobb wake up and become reunited with his family, or is he still asleep, dreaming of them?” The famous short story The Lady, or The Tiger? leaves readings wondering… well, exactly that.

If ambiguous events play out during the story, then readers should be able to interpret them in either way without being confused. They might even be unaware it’s ambiguous; they could just think Dom Cobb is supposed to be dreaming or he’s supposed to be awake. Personally, I consider that a success as long as readers don’t all interpret it the same way. And of course, as long as they all had a good experience.

If ambiguous events happen out of sight, maybe because your story ends right before the outcome is revealed, then you’ll need to paint the possible outcomes for your readers. Your viewpoint character can think through them or another character can explain them in detail. In The Lady, or the Tiger? the omniscient narrator describes both endings.

For offscreen ambiguous events, it’s also important that readers know it’s intended as ambiguous. If you put in small and unassuming details supporting one option or the other, that could actually make it more confusing. All clues need to be clear and carefully balanced against each other. If a reader misses part of these arguments and only sees evidence for option A, then they might feel uncertain whether events are intended as ambiguous. Then because your intent isn’t clear, they’ll get frustrated that you didn’t depict everything onscreen.

While making your choices look intentional can increase reader enjoyment, some choices are intentional but still a bad idea. Readers might feel cheated by mysteries that are never explained or dissatisfied with an ambiguous ending that feels out of the blue. But until you banish confusion, they won’t be able to tell you.

Five Stories That Spoil Their Own Mystery

Comments on How to Keep Mysteries From Looking Like Mistakes