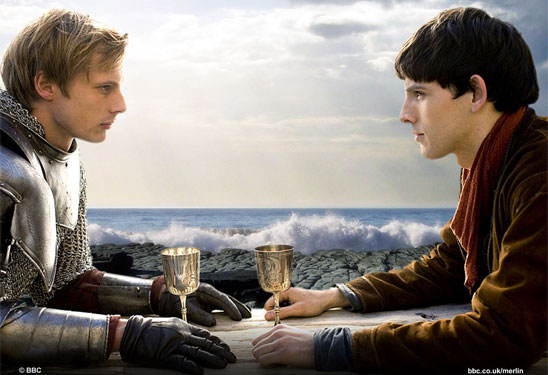 BBC's Merlin probably would have been canceled if not for its slashing fanbase.

The biggest obstacle standing between new storytellers and success is lack of publicity. But did you know you can inspire a passionate fanbase who will spend countless hours creating free advertising material for your story? And that those same people will then post their advertising – for free – in public places online where even more passionate fans will see it?

These are fans who create slash: fanworks that involve romantic pairings of two more or more characters of the same gender. To attract them to your story, you’ll need to create the right chemistry.

You’ll need characters that your fans can get excited about. That doesn’t mean making all of the guys tall, dark, and handsome. What your audience really wants are two things:

Of course, physical attractiveness will also help your chances, particularly if you’re working in a visual medium. But again, remember to give them physical variety along with their differences in personality.

Then Make Sure They Spend Time Together

Your attractive characters can’t build up chemistry if they’re never in the same place at the same time. The more often they interact, the more opportunities fans will have to imagine them taking it a step further.

Go beyond a simple working relationship and give them some interactions that are personal in nature. That doesn’t mean they have to be best buds; story pressure can compel them to get emotionally intimate when they wouldn’t otherwise. But don’t just trap them in a elevator. Instead, force them to solve problems together. Perhaps one of them has trouble doing their part because of personal inhibition, and the other has to coax them through it so they can both reach safety.

Then fans can imagine them coaxing one another later.

Give Them Antagonistic Overtones

There’s a reason many romances start with two people that hate each other; interpersonal conflict feels like sexual tension. If you’ve given them a healthy dose of contrast, then you should have a great starting point for disagreements. Let them squabble over whether to burst through the front door or sneak in a window. Let the shy character struggle to stand up to the overbearing character. That will catalyze their chemistry.

The juiciest slash could involve characters that are outright enemies. You can encourage it by making their deadly conflict personal. The villain shouldn’t just want to remove the hero because they’re in the way. They should want to remove them because their pride won’t be satisfied until the hero is dead. Then give your enemies one or two opportunities to interact without fighting. Perhaps they form a temporary alliance against a greater threat, or unknowingly meet each other in disguise. This will allow your fans to imagine more interesting situations in which they’re not fighting.

Add a Healthy Dose of Subtext

Along with interpersonal conflict, you can heat things up by adding subtext to character interactions. Every fan will have their own definition of what is and isn’t subtext, but in general, it’s character behavior that suggests the couple has the hots for each other, without clearly establishing it. Unobservant fans might not notice blatant subtext, while those who are looking for it might read it in platonic interactions.

Common forms of subtext include:

But the more subtext you include, the more important it is that you follow the last step.

Then Pay Your Fans Back

Not long ago, slashers couldn’t expect more than subtext from major productions. But times have changed, and any work that encourages slash without providing fans with satisfaction will be seen as cowardly, exploitative, homophobic, or all of the above. So do right by all those enthusiastic free advertisers, and include significant gay relationships in your canon.

Of course, not every couple with subtext is destined for canon-hood. You may have included chemistry for conflicting character combinations, and pairing off enemies is a poor fit for many stories. But if you and your fans have been paying special attention to a pair of buddies that have fireworks and deep emotional attachment, make it official by slashing your own characters.

Comments on How to Get Fans to Slash Your Characters