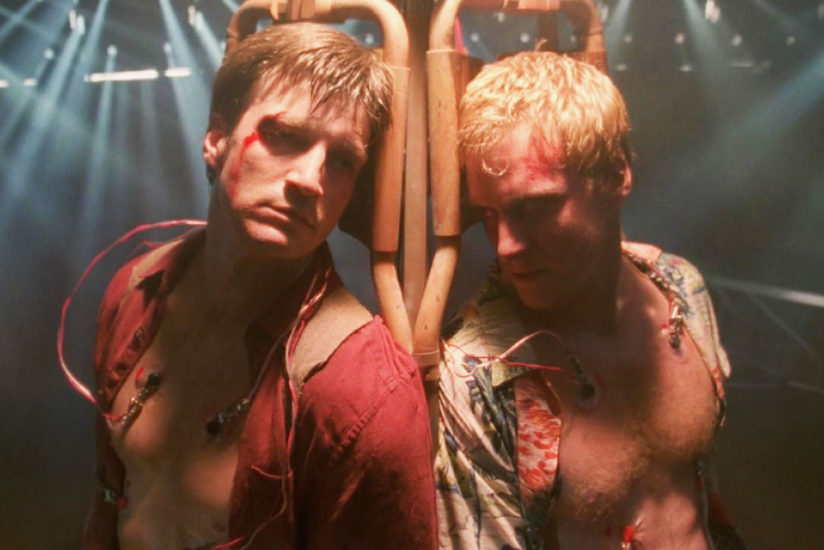 Zoe has to choose between Wash and Malcolm in the Firefly episode War Stories.

Moral dilemmas are a great way to create thoughtful and memorable moments in a story. However, with every popular storyteller trying to be more edgy than the last, moral dilemmas have become a bit twisted. Let’s cover what moral dilemmas can accomplish, what they can’t, and how to create one that’s more than pointless provocation.

What Moral Dilemmas Are For

Some people offering storytelling advice insist that heroes have to make hard choices. This isn’t true. A hard choice is only one type of turning point a hero can use to win conflicts (or lose them). And moral dilemmas are only one type of conflict you can use in your story.

Like any conflict, moral dilemmas are useful for raising tension. Since they often force heroes to choose between people they care about, they are particularly good at creating drama. However, what sets them apart is their commentary on morality.

Heroes make moral decisions constantly, but most of those decisions are clear cut. The moral dilemma allows us to acknowledge that morality is not always easy and chart a path to moral decision-making even when it is hard. When you create a moral dilemma, you are sending a message both about what choices are hard and which choices should ultimately prevail.

This means that if you want to stand 100% behind a cause, a moral dilemma is a bad fit. For instance, choosing to support reproductive rights or universal suffrage should not be a hard decision; it should be an easy one. Good moral dilemmas offer insight on situations that make choices difficult, and they do it without tearing down real-world causes that are important.

Every moral dilemma needs two options. Technically, you can have more than two, but simpler is better. You want something that’s easy for your audience to understand and remember. So even if the situation is complex, consider boiling it down to two choices that represent the whole messy situation. If you want your hero to think up a third option, that can come later.

The choices you create should:

Sometimes storytellers have trouble coming up with roughly equal choices. Instead of starting with typical black-and-white choices and trying to make them gray, look for inspiration from real-world situations where choices are difficult.

Whatever options you create, remember to communicate their upsides and downsides to your audience. To appreciate the moral dilemma, they need to understand the implications of each choice.

Giving Your Hero an Answer

Unless your hero is headed for a tragic failure, they’ll come up with a right answer to the moral dilemma. Yes, a right answer. Your hero can question their answer or feel bad about their answer, but you as the storyteller are still making a statement about what choice is a good choice. That’s what makes the resolution of a moral dilemma feel satisfying. If you present two options only to play a game of eeny, meeny, miny, moe, it will feel like the cop-out it is.

If you’re planning a tragic resolution, your hero can make the wrong choice and suffer the consequences. But in the process, you will reveal to your audience what the right choice was.

That doesn’t mean you have to assert yourself as the ultimate moral authority in situations where right answers are thin on the ground. It just means that you need to provide a reasonable justification for whatever you choose.

Let’s cover some different ways moral dilemmas can be solved:

You might notice that these solutions look like standard turning points, because that’s what they are. Again, a moral dilemma is a type of conflict that is solved much like other conflicts. This means the hero doesn’t have to adhere to one of the above options as long as they do something to earn good karma.

For example, in the Firefly episode War Stories, the sadistic villain Niska kidnaps Malcolm and Wash. When Zoe brings Niska money to get them back, he offers to release just one of them. That means Zoe has to choose whether to rescue her husband or her captain and longtime comrade. Before Niska’s even finished telling Zoe she must make a choice, Zoe quickly and easily chooses her husband, Wash. Why does this work?

First, it’s easy for viewers to guess why Wash is the more moral choice. He’s a civilian, whereas Malcolm is a soldier. And since Malcolm is the ship’s captain, he bears much more culpability in angering the villain. The reason Zoe gets away with making an easy choice is that not only is it a great subversion, but also in this situation, it actually makes her look more exceptional. The episode established that Wash was jealous because he was worried Zoe cared more about Malcolm than him. Zoe’s easy choice proves that Wash was wrong.

The solution you choose for your moral dilemma can say interesting things about values, morality, and your hero.

The Voyager episode Tuvix is notorious for its supposed moral dilemma. In the episode, a transporter accident combines the characters Neelix and Tuvok into a single person called Tuvix. This combined person is happy and healthy, and he wants to live. However, the entire crew of Voyager* decides to murder him to bring Neelix and Tuvok back from the dead.

This isn’t so much a moral dilemma as it is an excuse to be edgy. To maximize the shock factor, Tuvix begs everyone for his life, only to watch them all turn away. The dilemma is nothing more than the old trolley problem, and the episode has nothing interesting to say about it. The crew all agree on their answer, creating no worthwhile debate. And the premise that Tuvix must be killed to bring back Neelix and Tuvok is absurd given what happens in other Star Trek episodes. The transporter creates people out of nothing numerous times, including a clone of Commander Riker in Star Trek: The Next Generation.

If the writers just wanted an episode that would generate controversy and make the only female Star Trek captain of the time look bad, they succeeded. But I think the rest of us can aspire to greater things. So here’s what to avoid if you want your dilemma to feel more genuine.

Because stories have traditionally been so full of black-and-white morality, many storytellers aren’t used to depicting nuanced issues. So when they want moral choices to be hard, they make a good cause look bad or a bad cause look good.

Some sources of advice tell writers to do this, supposedly to make story situations less clichéd and more interesting. But graywashing is only a cheap imitation of real nuance. That doesn’t mean good causes can’t come with complications, but it needs to be a natural part of the situation and not a contrived twist.

Giving the Hero Only One Gross Option

At the summit of Mount Edge is a story situation designed to force the hero to do something absolutely awful. This allows storytellers to pat themselves on the back for being provocative, as though we’re small children who smash sandcastles rather than craftspeople who build them.

For instance, if the situation is that the protagonist has to sacrifice an innocent person or the whole city will be destroyed, that’s not a moral dilemma. The choice is obvious, so there’s no dilemma about it. This means that when the hero decides they have to make the sacrifice, it doesn’t offer the audience any meaningful insight or commentary. All it does is get the hero to do something that is repugnant.

Audiences get frustrated when heroes ignore obvious solutions or otherwise indulge in unnecessary hardship. This can be a problem for any conflict, but moral dilemmas are more sensitive to it than most. That’s because in many cases, the hero will have to make difficult compromises. Even if they avoid that by finding a way out of the dilemma, the situation must feel genuine to be meaningful and evoke the right emotions.

If your story is in a world where magic or technology is very powerful, there’s a good chance that many of the story’s problems could be solved with technology or magic. For instance, if characters can heal people who are basically dead, it’ll be tough to justify why the hero can’t sacrifice someone to appease an evil god and then just bring that person back.

When you craft a moral dilemma, there’s always a risk that the audience won’t agree with your choice. While you can reduce your risk by designing your moral dilemma for meaning rather than provocation, it won’t go away entirely – nor should it. Every story says something. If everyone already agrees with your message, why say it?

Not just Janeway. While she pulls the trigger, she has everyone’s support in doing so.

Comments on How to Create Moral Dilemmas That Are Actually Moral