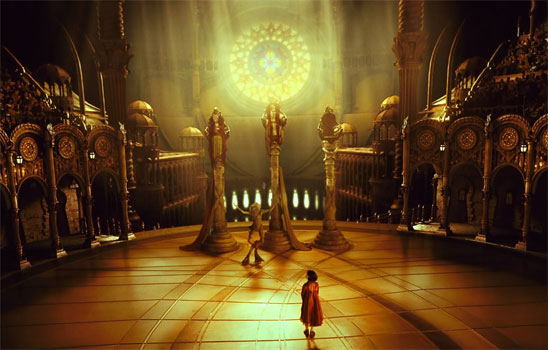 The light at the end of the tunnel in Pan's Labyrinth

Throughout your story, your audience will cheer for your hero as she struggles against the villains. There will be many losses and gains, until it’s time for the final battle. You know your audience will leave satisfied if your hero knocks the bad guy out of the park. But what if you want her to fail? You can still craft an end that resonates.

1. Include Happy Moments in Your Work

Your unhappy ending won’t mean much if your entire story is depressing. While you should include tragic moments throughout your story to set the tone for your unfortunate finish, it’s important to give your audience relief from time to time.

For maximum impact, the happiest moment of your story should happen right before your climax, when everything goes horribly wrong. Take these famous works for example:

Game of Thrones is notorious for its tragic weddings. What makes these scenes so powerful is the contrast between the joyous event and the horrific violence that follows. The characters feel confident that they are on the path to victory right before tragedy befalls them.

The Stephen King classic Carrie is about a social outcast. She gets her first chance at fitting in when a popular jock asks her to go to Prom with him. She’s suspicious, but she decides to take a chance and trust him. She’s even crowned Prom Queen, before the worst happens.

Unless “fighting despite impossible odds” or the “insignificance of humanity” are critical themes in your story, you should use your light scenes to show that success is achievable. That will emphasize the great loss at the end, and call attention to why the hero failed. If you have hidden lessons in your story, that’s where they’ll be, and you won’t want your audience to miss them.

2. Give Your Hero a Choice

Just because your hero fails, doesn’t mean he shouldn’t be responsible for the outcome of the story. If he prepares as well he can, steps up to fight the villain, then slips on a random banana peel, your audience won’t be very happy with you. He has to lose because of a conscious decision or purposeful action.

Choices that lead to tragedy usually follow one of these formulas:

You have a misguided hero, with a critical flaw in her character. Create a character arc starting with this flaw, so she has the chance to move past it. Then create a large setback in her personal growth, before she’s tested during the climax. She’ll make the wrong choice, causing her downfall.

In Dr. Horrible’s Sing-Along Blog, Billy channels his sense of failure and disillusionment into villainous schemes. His budding relationship with Penny gives him the emotional support he needs to get on track, but after goading from his nemesis, he fully commits to villainy.

If you want fate to doom your hero, he should have a hand in sealing it. This is why self-fulfilling prophecies work so well; they rely on the unwise decisions the hero makes to avoid fate. But look for ways to make your prophecy narrative fresher – perhaps he resigns himself to his fate instead, and this outlook ultimately destroys him.

In BBC’s Merlin, a young wizard believes his destiny is to protect Arthur Pendragon. But after he learns that he will eventually fail, he does everything he can to change that fate. His desperation overrides his better judgement, leading to the events that were foretold.

You have a bittersweet ending, where the main objective succeeds, but at the cost of your hero’s life or dreams. In this case, just give her the option to turn back. However, it’s not a true option unless she can live out the rest of her natural life in relative comfort and safety. If the whole world would go kablooey without her, her decision to risk her life becomes meaningless.

In Season Five of Buffy the Vampire Slayer, Buffy is told that the only way to prevent an unimaginable cataclysm is to kill her sister, Dawn. Buffy realizes that because they are connected by blood, her own death will work just as well. She sacrifices herself so Dawn can live.

It’s vital that your audience understands why your hero makes the choice that leads to tragedy. And no fudging; your explanation must be solid. The better your character development is, the more you can justify unusual choices.

It’s easy to overdo powerful scenes and wander into purple prose or comical acting. Keep your character from hysterics when the worst happens. Use subtle imagery to emphasize your tragedy instead of dramatic dialogue. If you’re writing, avoid embellishing your description. Trend toward understatement.

Carefully plan death scenes so they are realistic and original. If you need your dying character to say some last words before departing, they’ll need a quiet environment, and a cause of death that doesn’t kill them immediately or cripple their ability to speak. You don’t have to give your hero a goodbye speech at all. Consider a knowing look, a failed attempt at words, a few gestures, or a sudden death that cuts conversation short. Play with different ideas until you find one that feels both fresh and appropriate for your characters.

Don’t use your hero’s death to heap praise and attention on him. It will come off as excessive glorification to your audience. Instead of gathering a parade of people to carry his body, consider letting his deeds go unsung, or entrusting the truth to a single side character. Then his actions will stand for themselves.

In Madoka Magica, main character Madoka has enormous power. She uses that power to end a great tragedy of the universe, but in doing so, ceases to be a human and becomes a law of nature. Except for one friend, no one remembers she even existed.

Just as happiness might prelude your tragedy, a little light should shine in the darkness of your story’s closing. This will give your audience something pleasant to hold onto. It doesn’t have to be big. It could be a few flowers that grow over a grave, or a last message that floats down a river and is found by a villager. For something more significant, choose one plot line or character arc in your story to end well. If your world crumbles, give your audience a ray of hope by foreshadowing how it will be restored or remade.

In The Steadfast Tin Soldier by Hans Christian Andersen, a toy soldier and a paper ballerina fall in love. Unfortunately, the threats of the larger world are too much for them, and they are cast into a hot stove. All that remains is a little lump of tin – in the shape of a heart.

In Cloverfield, Manhattan is ravaged by a huge beast. Instead of escaping, Rob goes to Midtown to rescue his friend and lover Beth. He is afraid she doesn’t know how much he loves her. They became trapped in the city and perish, but just before they die, they declare their love.

Don’t forget to follow the rules that apply to all endings: foreshadow, tie up loose ends, and keep it simple.

Unhappy endings aren’t for everyone. Many people avoid stories that close on a tragic note. That’s okay; you can’t cater to all tastes. Instead of holding back, give your darkness-loving audience an unforgettable experience.

Comments on How to Create an Unhappy Ending