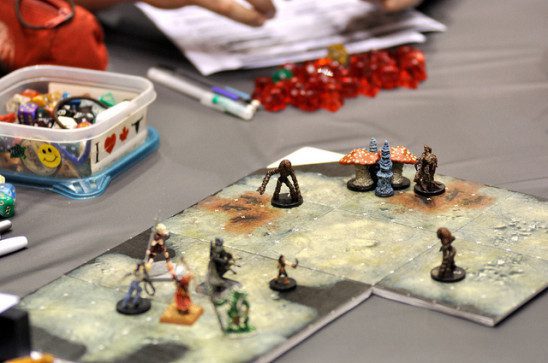 Many GMs are familiar with the struggle of writing a one-shot adventure. Unlike a long running campaign, you will not have multiple sessions to develop elements that make successful roleplaying adventures: immersive settings, meaningful characters, and strong player motivations. To get your players invested in a brief plot line and a single game session, you will need to be efficient with the time you have, both during planning and at the gaming table.

The key to efficient planning and implementation is identifying the major components of your adventure and briefly touching on each. If you use all of these pieces, you can run a great one-shot without a sheaf of detailed notes or a pre-made adventure module.

Every roleplaying game should have a compelling plot hook: something in the story that draws players in and motivates them to push forward. In many campaigns, a DM can take a soft approach to plot hooks early on. This lets all the players take time to get a feel for their characters, or explore the setting while the stakes are still low.

You don’t have time for this in a one-shot though. For most groups, a typical session lasts about two to six hours. In your one-shot, you need to grab the players’ attentions right out of the starting gate, and get them started through the adventure as quickly as possible. This makes the plot hook one of the more important pieces of your adventure.

Working backward from the adventure’s climax will ensure that your hook will pull the party through the session smoothly. We’ll follow Christine, an experienced GM, as she plans a one-shot for her group.

Now that you have the adventure’s plot line defined and hook in place, you need to establish what the setting is. You should prepare or use an existing structured world as a framework for your adventure. Identify a short list of features that you can use when starting the adventure to quickly give your players a feel for the world they are in, and what their place in it is. Focusing on one piece of the setting will help, both by narrowing the scope of the adventure and by giving potential reasons for the characters to work together.

Christine decides to build a setting with a similar feel to standard fantasy roleplaying for her one-shot. The region used for play will be temperate, with numerous ridges and valleys covered in thick deciduous forests. The village acting as the adventure focus will be in located in one of the valleys – necessary for farming, but difficult to protect. Towns and villages tend to be about a day’s travel apart, with no major cities within several days of the farming community in question.

If the campaign world is new to your player group, it’s helpful to set expectations about the tone of the world, and what would be typical to encounter in it. I like to borrow a technique from a game called Microscope by establishing a “palette.” This dual list establishes how the setting differs from its genre, both in typical world elements that have been excluded, and atypical world elements that have been included.

In putting together a palette for her world, Christine lists adventuring guilds on the “included” list. While adventuring parties are not uncommon in most fantasy settings, Christine wants “adventurer” to be an explicit profession in this world, something people post wanted ads for. For the “excluded” list, Christine writes down demons and planar travel – she wants to avoid elements that might make the world seem too supernatural.

To help PCs care about the stakes, you want to keep the cast of potential new contacts small and distinctive. Create a short list of characters before starting play, including the following information:

For her one-shot, Christine fleshes out the tavern owner, one of the farmers, and the two bandits vying for control of their group. This gives her a core group of NPCs to anchor events around.

Once the heroes have taken the hook, you want to start using techniques that will increase the emotional impact of your adventure. Having limited time to act, endangering NPCs that the players are fond of, and elaborating on the consequences of failure are all ways to further engage the players as your adventure progresses from the setup to the final conflict.

As Christine explains the villager’s plight, she emphasizes that if their food stores are stolen, there will be no opportunity to replenish them before the long winter. The tavern owner mournfully tells them about a neighboring town that faced a similar crisis a few years ago. By the time spring came, fewer than half of the townsfolk, and almost none of the children, had survived.

Since you are trying to keep the adventure short, it can be easy to fall into the trap of railroading your players. To avoid it, plan out at least two options that the party can take that will lead to success. In addition to making it clear to the players that they have choices for addressing the conflict, it will make it easier for you to consider and say yes to alternatives that they think up at the table.

To make sure that she doesn’t box her players into a single course of action, Christine plans out what she thinks of as the two obvious paths. The heroes could either set up watch over the silos and defend them whenever the bandits arrive, or they could follow the bandits back to their hideout after the supplies have been stolen, to fight at a time of their choosing. Christine also knows her players might have an idea she hasn’t thought of, so she makes sure that her enemies can be used in different ways. That way, her plot isn’t too rigid to accommodate what her players want to try.

Give the Ending Room to Grow

With a one-shot adventure, you always want the players to walk away feeling satisfied that the story is concluded. Incomplete tasks will make your players feel cheated out of a good ending. However, it can be good to leave room in the ending to start up new chapter in the story if they want. You never know when your players will enjoy your adventure enough to ask you for more. Having an ending that opens up new plot potentials will make the process of expanding from a one-shot adventure to a full campaign easier in the long run.

Since Christine decided the main obstacle for the adventure’s climax would be a monster and not a bandit leader, she has an obvious path to take for any future adventures. As an epilogue to the adventure, Christine describes how slaying the hill giant has demoralized the bandits. The leader that survived the fight leads them far away from the village. However, with his rival gone, he will probably consolidate his influence over the bandits. Will the bandits change their ways under him? Or will his leadership ultimately make them a greater threat to the region?

When planning and running a one-shot adventure, your goal as a GM is to quickly invest your players in a plot line, then bring it to a satisfying conclusion. While play time is significantly limited compared to a full campaign, keeping yourself and your players focused on key plot and emotional points will ensure a fun experience for everyone.