How Do You Describe a Character? 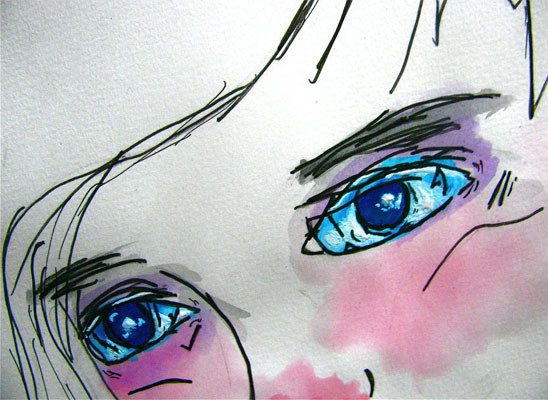 Recently, a reader named Jason wrote us to ask us about character description. Specifically, he wanted to know:

If you’re describing humans, how much is enough for a minor character? For example in some books they mention eye color but personally I can’t tell eye color unless I get creepy-close and check but is it important under normal circumstances?

If you’re describing aliens do how do you do it? Imagine doing a novelization of the cantina scene in Star Wars, do you need to describe every species there or just the two that were harassing Luke?

I can’t quite get the hang of it. I want to be descriptive but I don’t want to devote a paragraph describing a throw-away character either.

That’s a lot of questions packed together. I’ll outline some guiding principles to give you a better feel for your description, regardless of the context. When describing a character, here’s what you should consider.

What Is Your Viewpoint Character Thinking?

Most of us are writing in first or third person these days. If that includes you, then your description should reflect what your point-of-view character (POVC) is thinking about in that moment. For instance, if you launch into lengthy character description mid dialogue, it will create the impression that your POVC has become mesmerized by those perfect eyebrows and neglected the conversation.

Your POVC has the biggest reason to dwell on someone’s appearance the first time they meet, particularly if their appearance is striking. For instance:

My new coworker wasn’t the old canker I’d expected. Despite his tailored suit, he rested casually against the wall, his hands hidden in his pockets. Gentle waves of red hair fell down over his amber eyes and onto his sharp cheekbones. My fingers itched to push it back behind his cute button ears.

This is a pretty lengthy description. But in this instance, the POVC has many reasons to dwell on his appearance:

That’s also why I described mundane details like his hair and eyes. Jason’s right about eyes – most POVCs won’t make a habit of categorizing everyone’s eye color. But eyes have a lot of romantic significance. It’s appropriate to describe them when your POVC is admiring a crush or experiencing an intimate moment. Otherwise, the POVC will focus on the features they find most striking – probably something else.

It’s unrealistic for the POVC to focus on things they’re used to. You might describe their boss like so:

She clutched her mug of coffee, her hair disheveled and tired bags showing beneath her eyes. She wore the same awful combination of plaid jacket and striped vest that she had on during my interview.

The POVC doesn’t have a reason to think about eye color or hair color – they’re always like that. Instead, the POVC reflects on what’s different that day and compares it to previous experiences with that person.

If you want to describe traits the POVC knows well, you’ll have to work for it. Give your POVC a reason to think about the character’s appearance. A new haircut is a good reason to reflect more deeply on their hair in general. Perhaps your POVC can tell something is different, but they’re still trying to figure out what.

This rule also goes for describing the POVC. If you want them to think about the everyday aspects of their appearance, come up with a reason why it matters in the scene. Then you can use a combination of thoughts and dialogue from other characters to describe their features. Don’t let them stare at their own eyes dreamily in the mirror.

If you’re writing in an omniscient viewpoint instead of a limited viewpoint, you can disregard most of this and use your judgement in picking what to describe. Just avoid picking the same details for every character.

How Important Is the Described Character?

The importance of the character should also influence your description. Don’t waste too many words on anyone who isn’t central to your story.

You want your readers to know your primary characters well, and description can help with that. But avoid focusing on aspects the character has no control over, as they will tell readers very little. Instead of describing their height, describe their choice of clothing, hairstyle, or makeup. For instance, if their clothing has grass stains, the audience not only has a visual, but also knows they engage in an outdoor activity.

And don’t stop at their looks. Bring them to life with a jaunty walk or some fingernail biting. Give them garlic breath or continuous sniffles. These action-oriented details can also be spread throughout the scene as they come into play, rather than heaping them all up front.

While you’re using your description to establish their personality, you’re also setting expectations for the character’s importance. The more description you have, the more important readers will think your character is. Let’s say your POVC just happens to stroll past a construction scene and sees this:

A muscled woman stood over the ditch wearing dirty coveralls and a sleeveless vest. She yanked off her hard hat, letting sweat trickle from her bronze hair down past her temples. Then she tossed the jackhammer aside.

If your POVC just keeps walking and never meets that woman again, your readers will be confused. They’ll wonder who the woman is and why they never saw her again.

You can use this rule to deliberately mislead your audience for humor or shock value. Perhaps your POVC falls for a random girl who’s waiting for the bus, describing her in poetic detail for an entire paragraph – the writing equivalent of slowing time for a hair flip. Naturally, your readers assume this is the love interest of the story. Then the bus appears, and she jumps in front of it, dying instantly.*

If you want your secret villain to stay secret, you can disguise them as a lesser character by neglecting their description. Don’t even bother naming them; let your POVC dismiss them as “the gardener.” However, don’t let your readers forget this person entirely. Mention them frequently, if only in passing.

Most minor characters aren’t important enough to describe in detail, but your readers still need to keep track of who they are. No one remembers names, but they will remember your description if it’s striking enough.

So give them one memorable detail. Your detail might be:

Mention it several times when you are introducing a character, and then again every time they enter a scene. That way no one will mix them up.

These are the characters your POVC doesn’t bother to focus on and your readers don’t need to remember. Therefore, describing them is optional. The taxi driver may go unnoticed while your POVC as having a passionate conversation with a fellow rider.

But describing background characters can give your scene some atmosphere. Your readers will know a bar is dingy after the bartender spits on a mug they’re polishing, or a hotel is creepy when the clerk stares for a minute without blinking. Spreading some memorable description over lesser characters will add interest to your scenes – and it doesn’t have to be long to work.

Now let’s say we have an entire bar full of colorful characters – like our Star Wars cantina. If we only describe how the bar looks in general, we aren’t creating a memorable experience for our readers. But we don’t have time to describe every character there. So we’ll pick several striking details to represent everyone and mix it with our general description:

Luke paused at the cantina entrance. Inside, a quartet of bulb-headed creatures played wailing pipes before a crowd of bizarre monsters. Several furry men howled over their card game, and the bartender poured a smoking spirit for a giant slug. Luke hadn’t even left Tatooine, and he already felt lost.*

Once inside, Luke will still be distracted by all the odd things around him, so you can weave in more details as he observes them. You’ll want the aliens harassing him to stand out from this background noise, but not until Luke gets in a confrontation with them. Until then, they’re just two more strange creatures.

What Do Your Readers Need to Know?

Description can also support your story by imparting essential information and setting appropriate expectations for what might happen.

Aliens and the Unexpected

Let’s say your POVC is best buds with an alien. She knows this alien and his species very well, so she doesn’t think about his basic appearance. But if you wait three pages before he uses a third arm to strike down a bad guy, your readers won’t be happy with you. By default, they’ll assume any character has two arms, two hands, and ten fingers. They’ll imagine a humanoid shape even if they know he’s an alien. Whenever a character deviates significantly from what they expect, you need to tell them up front. But you don’t have to make a big deal over it, you can sneak it into your narrative:

Glastah was waiting with a drink in each hand. He handed one to me and gave the other five to my associates.

It isn’t necessary to cover every detail of his appearance right away. Give readers the big picture, then weave additional aspects in bit by bit. Once they understand he has six arms, they’ll be less surprised to learn he has tusks.

You may have some important world or story details you need to communicate using description. Let’s say you have a character that is descended from a dryad, and he has special dryad powers you will reveal at a critical moment. If that’s the case, you’ll need to foreshadow his dryad heritage, and describing his features can get the job done. Your POVC might wonder how his eyes came to be such a bright shade of green. But don’t rely entirely on his green eyes to build his heritage. Once you repeat this important detail several times, it will feel contrived and give away that you are foreshadowing. He’ll feel more realistic if he also has soil under his fingernails, a fondness for climbing trees, and an aversion to axes.

How much description to include varies significantly, even for the same character. You have more room for description in a novel than a piece of flash fiction. Some writers will include more description than others. But in general, a sentence or two will do the trick. Think of a paragraph as the maximum length for characters in a novel that have an important role and are unusual in appearance.

But longer description doesn’t mean better description. Powerful description conveys more information in fewer words and is memorable instead of mundane. You can improve it by being specific. A jersey is more memorable than a jacket, and a goblet more interesting than a cup. Strive to give your description purpose beyond painting a visual; let it to add depth to your characters and your setting.

We’ve put a up a new form right here, so you can ask away.

This isn’t like the previous example, because you aren’t leaving readers to wonder when she’ll show up again. Unless there’s necromancy in your world. In that case, avoid shocking bus deaths unless you’re actually going to raise the character.
To be fair, Luke might recognize some of these alien species and use their proper names.