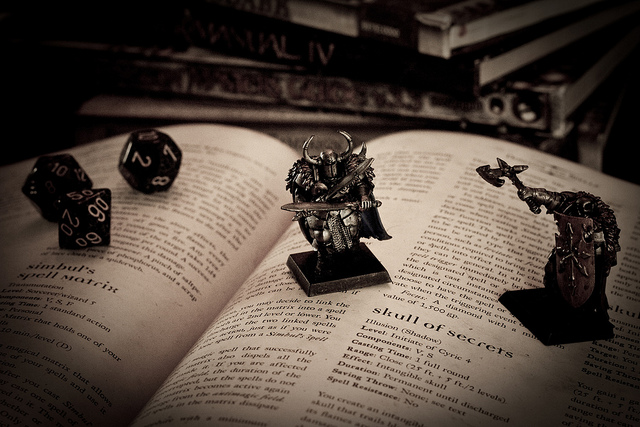 Good roleplaying campaigns get the creative juices flowing for both GMs and players. So it’s no surprise that many people want to make written stories out of their best moments of tabletop. But roleplaying and writing are mediums with very important differences. If you’re looking to translate your experiences into a tale that appeals to large audience, here’s what you’ll need to do.

Before planning your novel, make sure your story works outside a roleplaying context. If the thrill comes from beating the GM at their own game, or rolling five natural 20s in a row, it’s not going to work as a novel. While it’s possible to create a multi-layered story that features both players and their characters, it’s a very complex endeavor. You’d need to create fictional characters out of real people, and you’d better do it carefully if you don’t want any of them to smother you while you sleep.

Humor and novelty is also very different when you’re writing. Something that’s hilarious in a campaign, such as an animal familiar defeating the big bad after the rest of the party is dead, will seem overdone in writing. In a book, outlandish scenarios happen whenever the writer decides they should – they don’t have to struggle against a game system to make it happen. As a result, extreme badassery and crazy happenstance will come off as cheap and unbelievable to readers, even if they were wild successes in the campaign.

Look for fun and moving moments that didn’t rely on the meta narrative. Perhaps when two characters finally came to good terms with each other, or a brilliant ruse was revealed. If your favorite parts of the campaign are still special when you pretend they’re real, you have good starting material for a written work.

Once you’re sure this is the right campaign to put in writing, the next thing you should do is identify which of the adventurers will be the star of your story. In a roleplaying game, all the characters have equal importance, but it’s much easier to built a cohesive book if you focus on one over the others. You’ll want this person to be your main viewpoint character.

If you were a player in the campaign, the main character will probably be the one you played yourself. That’s perfectly fine, but in that case you’ll need to emotionally distance yourself from your protagonist. The character isn’t “you” anymore. If you don’t detach yourself, you could be tempted to create a wish-fulfillment character. They satisfy authors a lot more than they satisfy most readers.

After you’ve chosen your protagonist, give this person greater weaknesses than strengths. When you were engaged in the campaign, the characters needed a lot of skills to survive what the GM threw at them. But if you keep them all, your written character will be too powerful to make the conflict of your story feel threatening.

Even more importantly, your protagonist needs room for growth. Readers like watching underdogs move up in the world. So start small, and build a character arc that will give your main character the strengths and skills you want them to have by the end. The rest of the party can also start out weak, or they can remain powerful, acting as mentors to the protagonist.

Modify the conflicts you had during the campaign to make your protagonist more central. Your hero should be the deciding factor in most battles, especially near the end. This can be a surprise to the other adventurers, who might think the hero is just a flunky. Little do they know, they’ve become supporting characters. Their real purpose is to provide guidance, introduce a healthy dose of contrast, or even make trouble.

The most essential part of translating your campaign into writing is to tie your plot together. That means identifying and focusing on a single adversary for the adventurers to fight against. Choose your favorite villain of the campaign and make the fight you had against them the climax of your story. All the other antagonists should become that villain’s minions. The more relevant you make the conflicts of the campaign to the struggle against that one antagonist, the stronger your plot will be. Don’t forget to foreshadow their sinister presence in the beginning.

Making a strong story will require you to evaluate the events from your campaign and prune out the weak spots. If there’s a side quest or random jaunt that you can’t relate to the central struggle, you’ll need to remove it. Extract any special moments you’re attached to and work them into other areas.

Once that’s done, it’s time to erase any signs of GM influence on your plot. To keep the campaign moving, GMs occasionally lead their players around by the nose. Players need clear direction, and GMs don’t like it when their careful preparation goes to waste. In a written work, that will translate to a deficit of character agency. Once the story reaches Act II, don’t let any former NPCs tell your adventurers what to do next – make them figure it out. If your GM played a party leader, remove that character altogether. If you need a character to be captain or king in their place, make the new character completely incompetent or unavailable, so the adventurers are forced to be self-reliant.

Look for other signs that your plot originated in a game. If you have five different McGuffins of five different colors that your adventurers have to retrieve from the five continents, there could be a problem. The key is to keep the direction of the story in the hands of the characters. If they have to do precisely X to retrieve and disable a weapon that will destroy the world, what choice is left for them to make?

Last, review everything you have and ask yourself how it could be better. When you have so much material to start with, it’s easy to accept it as is. But even small changes could go a long way toward making your story more powerful.

Unless you were the GM and you ran the campaign in your own world, the setting of your story belongs to someone else. But don’t worry, rubbing their fingerprints off the world and inserting your own is the easiest part of this process.

In a good work of speculative fiction, the setting will be integral to the story in some way. Perhaps it’s essential to a character’s backstory, or its quirks are behind the central conflict. Look for those places where story and setting are deeply intertwined. Jot all of them down. Then scrap everything else you know about the setting.

Next, switch to a different genre of speculative fiction. If you’re starting with a science fiction campaign, write a fantasy. If it was fantasy, write steampunk. Genres of speculative fiction are mostly defined by the feel of the setting, so changing it will make the world seem very different. It will also force you to change out any words that are associated with the original setting.

Hopefully after your genre change, the few pieces of that original setting that you kept will look new. If not, you’ll need to brainstorm how to change them while keeping your story intact. Don’t make it harder than it needs to be; few ideas are completely original.

Once you are happy with those pieces, build the rest of the setting out from there. If the conflict of the story is about two factions locked in an eternal struggle, you can design clothing around displaying an allegiance, or give an important border the scars of many battles. Perhaps a small town with an important resource has changed hands so many times that the appearance of everyone and everything is carefully crafted to be as neutral to either side as possible. By focusing your worldbuilding around the pieces that are important to the story, you’ll end up with a more consistent and memorable setting.

When you’re done reskinning, you should have a world that both suits your story and that you can take credit for.

Campaigns require significant revision to become strong written works. But while you are making changes, don’t forget the reason you wanted to put your campaign into writing. Whether it was the thrill of defeating a greater enemy, comedic character interactions, or the mysterious atmosphere, both you and your readers will appreciate experiencing it in written form.

Comments on Four Steps for Making Campaigns Into Written Stories