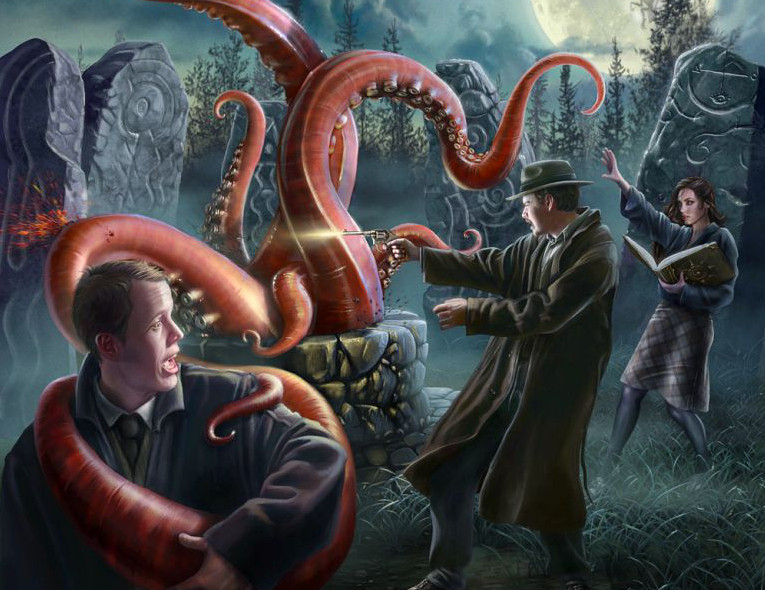 As Halloween approaches, the time of horror is truly upon us! Gather your friends round the gaming table and roll to be scared. Horror is a tried and true genre of roleplaying, but beware: it’s also one of the most difficult.* So many little things can upset the mood, and it’s impossible to get back. Don’t be taken unawares! Keep a lookout for these red flags in your game, so you can quash them before they become problems.

Horror is more frightening when it’s mysterious. Our brains are wonderful at scaring themselves, and when we lack information, they conjure images more terrifying than any truth. That’s why good horror movies don’t show you the monster until the end.

Once the threat is revealed, it’s less scary. PCs can assess it, adapt to it, deal with it. Even if the threat is of gargantuan proportions, it loses something by becoming known. In prose, authors tightly control the flow of information to both reader and characters, making sure both know as little as possible until the big reveal.

In roleplaying games, we don’t always have that luxury. Dice rolls happen, and sometimes we let information slip. Since many campaigns take place in established settings, players may read up on the horror ahead of time, or know it because they’ve played the game so many times before. Then there are settings like Legend of the Five Rings, where the main horrific entity* is well understood. In short, controlling the flow of information is difficult.

When you can’t control the spread of knowledge, subvert it. Plan your horror assuming the PCs know about it, and then make that knowledge detrimental. For example, the shoggoth is a favorite of the Cthulhu Mythos, a shapeshifting predator of black slime, nearly invincible to conventional weapons. The shoggoth’s only weakness is fire, but it’s a well known weakness. When players see a shoggoth, they either metagame and start building flame throwers, or get bored waiting for that information to be revealed to their characters.

In your game, shoggoths could draw strength from heat, converting its energy into more shoggoths. It’s only vacuum that can kill them, because their cells are unable to maintain cohesion without the pressure of an atmosphere. If a PC metagames and builds a flamethrower, they’re in for a rude surprise. If they don’t, then no big deal. This change doesn’t make the shoggoth unbeatable, just different. Players who enjoy horror will appreciate the change, because it lets them become fully immersed in the story.

Once you pull this trick a few times, players will recognize they can’t trust what they know. Knowledge won’t make them secure any longer, which is just how everyone wants it.

Horror is an inherently supernatural genre, from the twisted sorcery of Cthulhu to the crazy advanced technology* of Doctor Who. The incredible powers of vampires, sidhe, elder gods, and other creatures isn’t the only thing that makes them scary, but it sure helps. Facing enemies with abilities they can’t understand puts PCs at an inherently unequal level, perfect for horror.

Until the PCs get magical powers themselves, anyway. Once that happens, they’re no longer frightened humans jumping at shadows; now they’re equal players in a dangerous game. If that’s what you want, great, but it doesn’t work for horror. Even if the threat is still epic, PCs with supernatural abilities won’t be disturbed by it. You can see this if you ever allow the angelic or demonic merits from Hunter: The Vigil. When PCs can raise the dead and make their weapons blaze with holy light, what was once a desperate battle against predatory monsters becomes an epic fantasy smackdown.

In roleplaying games where magic exists, keeping it out of PC hands is difficult. The party will eventually get its hands on some important artifact or the instructions for a powerful spell. Short of blatant GM fiat, it’s nearly impossible to explain why the bad guys can have magic but the good guys can’t.

Let the PCs have their magic, but at a terrible cost. Sure, they can recreate the villain’s ritual for superhuman strength, if they’re willing to let something into their minds. The resurrection spell sounds tempting, until they find out it requires sacrificing two healthy people. Paying the price for these powers makes the bad guys bad. For an example, check out Call of Cthulhu. In CoC, anyone can use spells, but they cost sanity. Each casting brings the PC closer to eternal madness.

This makes magic powers part of the horror. They are a temptation to be resisted, instead of empowerment to be sought out. A character who uses magic has fallen a little farther into the shadows.

Similar to magic, technology empowers the PCs. Automatic weapons and futuristic suits of powered armor defeat even the most fearsome monsters. The internet allows for instant research and communication, so the characters are never truly alone. Cars and hoverbikes make outrunning eldritch threats a cinch. The more advanced your setting, the more powerful your tech.

It’s even harder to keep tech out of PC hands than magic. Players are really smart, and they’ll eventually get some powerful gear, no matter what obstacles you create. The more you tell them they can’t have something, the harder they’ll try to get it.

As technology gets more and more complex, planning for all the ways your party might use it becomes impossible. You thought a swarm of nearly invisible death mosquitoes would have the PCs running scared, but then they rigged a dozen car batteries together and created the world’s most powerful bug zapper. Flush with victory, the PCs start to feel safe. They should never feel safe!

The standard response is to escalate the threat, but this kind of arms race gets out of hand fast. It’s easy to cross the line from scary to ridiculous as you pile powers onto each monster. Cthulhu is terrifying when he devours 1d3 investigators per round in his tentacled maw. Adding surface to air missiles and ablative armor makes the elder god more dangerous but also silly.

The most obvious option is to run in a lower tech setting. If you can’t do that, then infect the technology with horror. Rather than scaling up your threat to match the PCs’ arsenal, make that arsenal a threat.

In the year 2050, everything is wireless. This Internet of Things allows humans an unprecedented level of comfort and convenience, but it also makes them vulnerable. Every device in the PCs’ house, and on their person, can receive signals. What happens when a transmission from the depths of space worms its way in, warping the thoughts of anyone who receives it?

Humans rely on their technology, and PCs are no different. Turning that technology into a threat throws them off balance, the perfect state for horror. Soon their high-tech gadgets will be a source of fear, not security. Mission accomplished.

Picture the scene: the protagonist is fleeing from an axe-wielding maniac. They turn down a blind alley and run into a dead end. The villain stalks forward, axe grinding on the pavement. Then a heavily armed SWAT team rolls up and mows the slasher down.

Nothing destroys horror faster than backup. Isolation is key to making people scared. While you can’t usually isolate PCs from each other, you have to isolate them from everyone else, or horror won’t happen. Aside from the practical assistance backup provides, it has a powerful psychological effect. As social creatures, we feel safe in numbers, and that applies to your game as well as real life.

If your party can call for backup, they will. Any game in which they are part of a larger organization has this problem. Delta Green and the larger conspiracies from Hunter: The Vigil are prime examples. As organizations with the explicit goal of fighting the supernatural, they have a vested interest in helping the party if things get out of hand.

When you reveal that the cult’s evil plans extend far beyond sacrificing a few teenagers, you won’t get a shocked and terrified response. Instead, your party will call up HQ and tell them to send in the cavalry, because things are serious now.

Each time you come up with an excuse for why reinforcements aren’t available, it erodes credibility in your setting. Players will see the organization they’re a part of as hopelessly incompetent. Instead of being scared, they’ll be frustrated, the kryptonite of roleplaying games.

If you can use a setting that doesn’t have large organizations, great. If that’s not an option, the key is to set expectations. When you portray Delta Green as a powerful organization with military assets at its disposal, PCs will expect that power comes their way. Instead, make it clear from the beginning that these are desperate times. The organization’s resources are stretched to breaking. Sending aid to one cell means abandoning another. Rather than helping anyone who needs it, HQ will only spend resources on groups that prove successful. This is coldhearted but necessary in the face of cosmic threats to humanity.

Next, show the vulnerabilities of organizational cooperation. If your players are skeptical that HQ won’t help them, send them on a mission to take out another cell that’s been corrupted. That cell received plenty of support, and now they’re turning their heavy weapons against the organization.

As a final blow, you can turn the organization itself into part of the horror. Convince the PCs that someone in HQ is out to get them, perhaps even turned by whatever lurks in the dark. Conspiracy paranoia is a great source of horror, if you have the right tools. Make sure the characters don’t ever know exactly who they’re talking to. A trusted contact at HQ is replaced without explanation. Is it harmless job shuffling or someone feeding them bad information? Vital weaponry is delivered with a fatal flaw. Is it an accident of overworked supply officers or something more sinister?*

All of these problems are opportunities in disguise. Horror arises when people are outside their comfort zone, and subverting expectations is a great way to get there. PCs will expect safety when armed with magic and machine guns, so show them they’re wrong. If they think they’ve got the knowledge and backup to take down the monster, they’ll feel terror all the more keenly when everything goes wrong.

Maybe romance is harder.
A corrupted wasteland called the Shadowlands.
Indistinguishable from magic.
For beautiful inspiration, I recommend the Area X books.

Comments on Four Elements That Kill Horror in Roleplaying Games