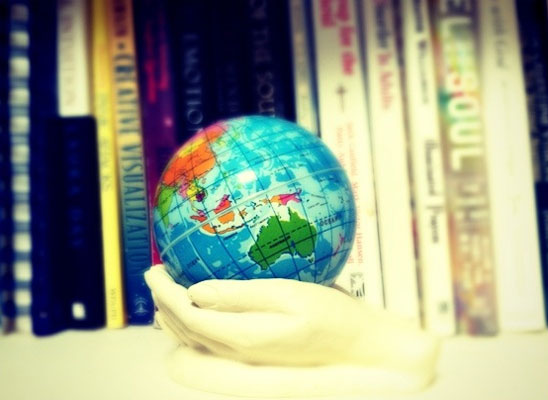 As we were taught in kindergarten, sharing is good. In fact there are many things, like beer and pizza, that are better when shared with others. Creativity is one of those things, but when worldbuilding is your favorite creative outlet, it can be difficult to find a forum for sharing. A spec fic world is not usually a stand alone product that’s ready to be boastfully (or shyly) shown off to someone. Don’t fear, though, there are ways to let others enjoy your world and not feel all those hours of creative endeavor were for naught.

Paint, sketch, draw, scuplt. Whatever artistic medium you prefer, art is a great way to share your world. It’s easily accessible for others to view, whether just with close friends or online with everyone. If your world creation leans towards sweeping visuals like landscapes, maps, or creatures, art is an effective display. It also means you remain the sole creator of the world. Art can only capture a single scene at a time, however, so it could be difficult to cover all the detailed elements of a large world.

Novels and novellas also keep control of your world in your hands, while opening it for other people to enjoy. Stories can be more effective than art in focusing on detailed histories or cultures, since characters convey those things in what they say and do. Writing a novel is a lengthy undertaking, though, especially if the world you created isn’t primed around a specific character or series of events. Stories also have important considerations other than the world, like good character development and an engaging plot arc. Of course, authors have pulled off world based stories before with extreme success, but novels aren’t the best venues for showing off your world if you don’t also want to deal with creating depth filled characters with an appropriate reason to trek across the globe.

A roleplaying campaign not only lets others see your world, it also lets them become active participants in it. This could be a drawback if you don’t want to relinquish that control, or an asset if you’re interested in absorbing those ideas. Campaigns are well suited for exploring the far reaches of a world, but if your game master style doesn’t contain plenty of action or a strong storytelling slant, it’ll be hard to keep the game exciting.

There are many varieties of board games, tabletop games and card games which would let others participate in your world, but stay within a fixed framework. Depending on the type of game and gameplay you go with, they could be suited to the specifics of different worlds. A game like Dixit caters to visually striking worlds. Do you have a detailed map and lots of warring factions? Think Risk. Or you could try a cooperative game, where your players work together to try to advert the end of the world. Rule systems can be a tricky balance, though. The best games have rules that cover every likely scenario, and make sense without being so complicated it takes longer to learn than to play.

A website for your world can provide lots of options regarding what to focus on and future development. A website could host art, stories or anything else you create while worldbuilding. Without additional requirements, like believable characters or good rule systems, its focus remains solely on the world. It can be as complete and detailed as the CIA World Factbook and far more imaginative. It’s also a good option if you have multiple worlds you want to share. To keep it entertaining and active, you can add serials, news or travel. As sharing goes, though, sending a friend a link is less immediate than playing a game together or handing them a physical work of art.