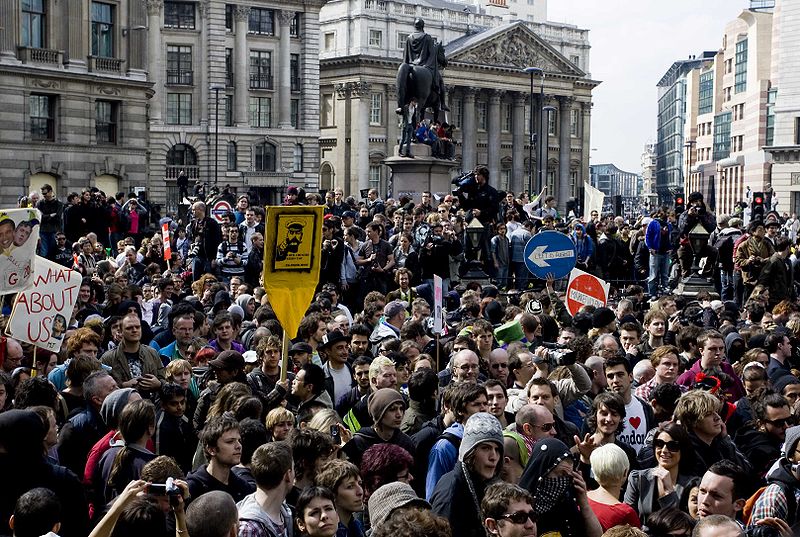 Image by Kashfi Halford used under CC BY 2.0

Creating a three-dimensional setting is no easy feat, especially since you have to do it while focusing on a relatively small group of characters. Recently, Brian Byars had a question for us along these very lines.

“I was wondering if you have ever covered the idea of population in fiction. There are some stories you read where it feels as if there are only a dozen or so people in the whole world. Other stories, you get the sense of a full population in the world. What are the tricks of the trade that give a story a sense of a fully populated world?”

Brian’s question got me thinking about how a setting can feel like a complete world or merely cardboard displays put up on either side of the main character. Even a sprawling series like A Song of Ice and Fire can’t focus on more than a tiny fraction of the people within its setting, so how are we to give readers the impression that our stories are filled with real people and not NPC mannequins? You can’t just bombard the reader with an endless list of characters* because they’ll blur together and become meaningless. Fortunately, I have a few thoughts on the matter.

1. Establish Characters From All Walks of Life

When telling a story of adventure and daring, it’s easy to focus on a homogenous group of characters. Resist this temptation. Making all your characters hard-bitten soldiers or wealthy nobles might save you time on writing backstories, but it will make your setting feel flat. If all your characters are from the same group, then readers get the impression that the world is populated entirely by that group.

Instead, vary the backgrounds of your major and minor characters whenever possible. This works in both globe-trotting epics and smaller-scale stories that take place within a single town. Human groups are fractal, you see. Whenever you zoom in on one, you find it’s made up of many smaller groups.

The Temeraire books do this really well, especially among the dragons. The titular Temeraire is a Chinese dragon raised in Britain. Among his companions are dragons from Turkey, the Incan Empire, and Australia. The human characters are also fairly diverse, hailing from every point of the compass.

This diversity not only reminds readers that China, Turkey, and so on exist but also gives them the feeling of a connected world. After all, if dragons and humans exist in the dozen or so places the characters are from, it stands to reason they must exist elsewhere as well.

2. Use Amenities to Indicate People

Creating a diverse cast is a good first step, but it won’t fix everything. You can only have so many characters, and the larger groups they represent can get rather abstract. More direct description of the people around your characters will help, but crowds described in a blank space won’t seem very real. To address this, consider what people build in the places they live.

Most of the time, people build things because they’ll be used, and the types of amenities in a place can tell you a lot about who lives there. In the film Zootopia, the main city is clearly designed for animals of all kinds to live together. This starts with the different climate zones, so animals from far ranging habitats can live close together comfortably. From there, we see different systems of mass transit so that smaller animals can get to work without being crushed and stores with second-story service counters for catering to the very tallest citizens.

Zootopia’s complex amenity systems create the feeling of thriving population that comes in all shapes and sizes. The film doesn’t spend much time on it, and a prose story doesn’t have to either. Readers will quickly understand the idea and be comfortable in the knowledge that this world is well populated by all sorts of people.

This technique is easy to adapt for your own uses. If you’re describing a town that sees a lot of travelers, mention the many inns that have sprung up to house the visitors. If your country is home to a fantasy species that’s much larger than humans, the roads are likely to be wider and the doorways taller, unless that species is the target of deliberate discrimination. Once you’ve settled on the amenities available in your setting, any people you describe will feel more real in the reader’s mind.

3. Describe Effects From Events Outside the Characters’ Control

We want our protagonists to be the main drivers of a story, to have agency in their own lives. That’s good to a point, but taken too far it creates the feeling that everyone else in the setting is entirely passive. They seem to just sit on their hands, waiting for the main character to arrive so they can finally do something.

That’s not a feeling you want for your story, but it’s a natural side effect of using a single point of view (POV). We don’t want important events to happen where the reader can’t see them, so that means they have to occur when the POV character is present. One solution is to use multiple POVs, but that has limits. Instead of everything needing to happen in the presence of one character, important events will be split among a handful, which isn’t much better. Besides, many stories benefit from the intimacy of a single POV, and we shouldn’t have to throw that away.

Instead, your characters can be affected by events they neither witness nor have any control over. This happens all the time in real life. I played no part in the 2008 housing crash, but it still wrecked my chances of getting a job after graduation. Readers instinctively know what it feels like to be blindsided by a problem they weren’t responsible for, and characters who suffer the same indignities are instantly more relatable.

Your story’s climax shouldn’t hinge on events the protagonist has no voice in; that would be unsatisfying to the extreme, but the rising action is a perfect place for lack of control to surface. If your characters are fighting a war, they might think things are going well, only to find out their side has suffered a crushing loss elsewhere on the front. Characters who engaged in delicate court intrigue might have all their plans upset when the Empress decides on a whim to relocate the capital.

Deep Space Nine pulls off this trick with flying colors. In season six, the characters have retaken their station and pushed the Dominion-Cardassian alliance back into its own space. Things seem to be going well until the Dominion launches a surprise attack and conquers Betazed. This staggering blow, which happens completely off screen, forces the characters to secure new allies by any means necessary. It reminds viewers that while the main characters are important, they are not the only ones fighting.

Amenities and off-screen events are all well and good, but if you don’t want your world to feel like it’s inhabited by a faceless mass of people, you have to illustrate the differences between groups. We’re all human, even orcs and elves, but the culture we’re raised in has a major effect on who we are. The same is true of characters. Of course, showing all the depth of a culture is challenging, but there’s an easy shorthand: focus on who has what resources.

Showing that people don’t all have access to the same things will make your world more lifelike, as it more closely resembles the one readers live in. The most obvious difference in resource access happens on the scale of rich and poor. In a steampunk story, wealthy characters can afford to take airship taxis anywhere they want to go and enjoy all the benefits of indoor plumbing. Their clothes will be fancy and covered in lace. A poor person in that same society will need to walk everywhere, use an outhouse, and wear threadbare shirts.

Differences like these can occur across geographic and political lines. A dwarf growing up in the tunnels of an iron mine might consider swords and armor a common commodity. Meanwhile, across the mountains, an elf harvests so many delicious fruits that they seem commonplace. When this dwarf and elf meet, both are astounded by the other’s possessions. The elf is used to a life where iron is a rare treasure, and the dwarf has never tasted such fantastic produce.

Focusing on what resources a group has access to allows you to illustrate differences without falling into the trap of cultural stereotyping. It reinforces in the readers’ minds that your world has depth and complexity rather than engaging in the all-too-common tropes of monoculture or the planet of hats.

So you’ve either done the work to create your own cultures from scratch or thoroughly researched existing ones. That’s good, but how do you make them stick in the readers’ minds? Simple, use them to create conflict!

Cultural differences are ripe for misunderstandings that can exacerbate an already fraught situation. For example, we shall return to the Temeraire books, because this is something they do particularly well. When the characters first travel from Britain to China, they have a devil of a time* understanding the complex forms of etiquette around the Imperial court. While the Chinese try to give instruction, it sometimes doesn’t occur to them that the British don’t know what to do.

On the flip side, the British obsession with naval power leads to several incidents as well. The characters react with extreme hostility to any threat towards their ships, regardless of the circumstances. This leads the representatives of other countries, China included, to think the British unreasonable and violent.* Needless to say, in a book series that’s largely about dragon diplomacy, this causes a lot of problems.

The upshot of all this culture clashing is that it makes your world come alive. No one will see your world as monolithic or static when the different factions within it are feeding the plot. Your story need not be about globe-trotting dragon diplomats to use culture clashing. Even characters from the same country or city may have strong cultural differences in the right circumstances. A by-the-book military officer will certainly struggle if put into a story where they need to work alongside a cutthroat mob family.

The one drawback is that if you’re not careful, culture clash stories can end up being about how one group is superior to the other, which is particularly problematic in real-world settings. The author of the Temeraire books avoids this by presenting two-sided conflicts and researching the subject matter well, but it’s something to be aware of.

Making a complete world with living people in it is a challenge, even in the extended space of a novel. Fortunately, you don’t need to describe every single aspect of your setting to make it feel lived in. You only have to provide the tools for readers to fill everything else in themselves. So long as you create the impression of a dynamic world, your audience won’t ever feel like your setting is just a dozen people following the protagonists around and putting on different costumes.

This isn’t Wheel of Time, after all.
As they would put it.
And, to be fair, the British of the 1800s were really violent.

Comments on Five Ways to Make Your World Feel Lived In