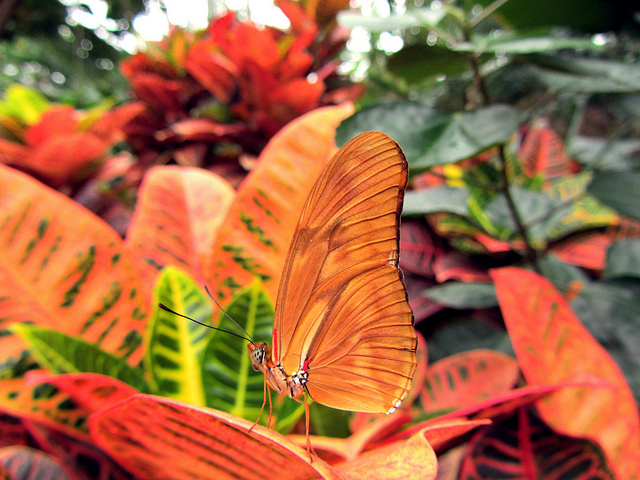 Image by Rachel Kramer used under CC BY 2.0

Foreshadowing is an essential tool for making plot twists and other reveals in a story work. But if the storyteller isn’t careful, foreshadowing can give the ending away. These five methods will reduce the chance of your audience catching on too quickly.

A surprising number of storytellers make the mistake of announcing their foreshadowing in a dramatic voice as their characters watch in awe. If you make a big deal out of your foreshadowing, your audience will wonder why it’s so important. Once they think about it, they might guess your reveal.

Instead, you can make your foreshadowing feel like a passing mention or unimportant side trip. Simply presenting hints as one item in a list of similar things will make it feel less important.

In Zootopia, Judy is having a tense conversation with the police chief about a thief she just arrested. Viewers don’t know it yet, but the thief stole some flower bulbs that will be critical to the plot later. If Judy talked about these bulbs in depth, viewers would start to wonder what their role in the movie was. Instead, the screenwriters used tense and clever dialogue to downplay them. The chief calls them moldy onions, and Judy corrects him. The chief dismisses her answer, and the conversation moves on.

The downside of this strategy is that your foreshadowing may be less memorable. However, in most cases several mentions will make up for this and still feel more subtle than a larger mention.

2. Use Broad Strokes Instead of Details

The job of foreshadowing is to make a reveal feel natural. To do that, you don’t have to be specific about what’s in the reveal; you only have provide enough context to make your reveal fit in. By giving more general information, you can make the details of your reveal feel realistic without calling attention to them. Instead of specifying that a gun or sword is present, you can mention weapons in general, an armory, or a smithy. Instead of specifying that a character is a former secret agent of the evil empire, you can mention that they were trained in the empire’s military.

In The Sword of Shannara, the druid Allanon is traveling through the woods with young Flick when he stares into the distance and says, “You… have a brother.” Besides making a big deal out of the foreshadowing, this is more specific than it needs to be. Instead, Allanon could have simply told Flick he knew of his family. The reveal that Flick’s brother Shea is the chosen one would have still felt realistic without pointing at a particular person.

If your foreshadowing is deliberately told to one of your heroes by an informant or mentor, vague language may not be the best solution. In those cases, it often feels contrived. Why would the speaker be so cryptic?

Audiences love it when multiple pieces in a story click together. Separating foreshadowing into smaller components can not only hide it better but also make your reveal feel more satisfying. Look for ways to give different small hints that alone don’t mean much, but that can be put together for a greater conclusion. If you want to hint that your farm girl is descended from the royal family, don’t give her an item with the family’s sigil or a special eye color only they have. Instead, give her multiple traits that the royal family has but ones that are also found elsewhere.

In the Game of Thrones TV show, undead men known as White Walkers are a growing threat in the North. It is extremely difficult to kill White Walkers because they are immune to regular weapons. However, the character Sam finds a cache of spearheads made from dragonglass and discovers that any White Walkers stabbed with them will shatter. At a different time and place, other characters discuss how swords made with Valyrian steel are rare because they were forged by dragon flame. This sets up for when the character Jon is in a settlement attacked by White Walkers. He loses the dragonglass he brought, and in desperation he defends himself with his Valyrian steel blade. When it hits a White Walker lord, the White Walker shatters.

Sometimes it’s hard to divide information without getting pieces that feel insignificant. If the ordinary brown hair of your character is a clue, give it a little more emphasis than you normally would.

4. Disguise Clues as Something Else

Great storytellers only include something in their work if it has a reason to be there, and audiences know this. If your foreshadowing appears to have no purpose when people come across it, many of them will guess what it is and then guess your reveal. That’s why whenever possible, your foreshadowing should do double duty. It can increase tension, provide important characterization, or be a running joke.

In Monty Python and the Holy Grail, King Arthur is on a quest with his knights, searching for the artifact. They stop at a French castle, telling the belligerent guard on the wall that if they’re given food and shelter, his master can join their holy quest for the grail. In response, the guard tells them “he’s already got one.” Then the guard ducks aside and repeats what he said to the other guards so they all can have a good laugh over it. To viewers, this looks like another joke in a movie full of irreverent assholes. But when King Arthur finally reaches the end of his quest, he discovers the Frenchmen really did have the grail.

Disguising your foreshadowing may take some creative problem solving, but it’s hard to go wrong with this technique.

Your reveals won’t be spoiled every time your audience notices your foreshadowing. They also have to guess what conclusion those hints are leading to. If you make that harder for them, you’re creating an extra layer of protection against having your story spoiled. The key is to offer clues that might hint at a variety of things in your story. Keeping your foreshadowing general can also help. Maybe your hint says something about death, and you have a god of death, characters who have died, and assassins who deliver death.

If you use this technique, make sure your reveal feels like it fits your clue better than the numerous alternatives it could lead to. If your audience thinks you designed the clue just to mislead them, your reveal will come off as contrived.

While these methods will help your foreshadowing go unnoticed by most people, a few may be impossible to fool. If one of your ten test readers catches on, don’t sweat it. Many people still enjoy stories that have been spoiled for them, and others love to feel in the know.

Comments on Five Ways to Hide Your Foreshadowing