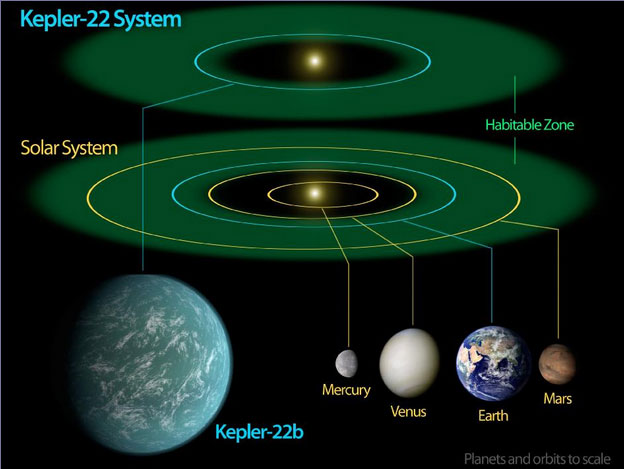 Using a hodgepodge of crazy methods – including absurdly precise measurements of dimming starlight, wobbles in stellar orbits, light-spectra changes, and weirder things – we’ve found thousands of alien planets orbiting distant stars. And every once in a while, a team of astronomers discovers an Earth-sized planet orbiting its star equivalent to where Earth orbits the Sun. And popular science blogs go crazy, because – wow, that world could support life!  It’s amazing…

Or it would be, if life was as fickle as the writers of popular science blogs.

The “Goldilocks Zone” comes up a lot when we talk about finding extraterrestrial life. This is the range of orbits around a star where the porridge is just right: temperatures will be roughly Earth-like, and ever-essential liquid water can exist. This lukewarm-porridge zone hugs a star closer if it’s dim, and remains farther out if it’s bright.

It’s a fairly narrow band, but not razor-thin. Scientists are generally aware that life on Earth can thrive both in arctic tundra and steamy jungles, so temperatures don’t have to be precisely Earth-norm. And to be fair, planets outside of this zone probably couldn’t have a biosphere that closely resembles Earth’s biosphere. But they could still have one.

In fact, they could have all kinds of different biospheres. Let’s look at five life-friendly but alien porridge bowls – er, worlds – in very different locations. And to take this one step further, let’s stay just close enough to home to make this thought experiment fun: some Earth-like life has to be able to live there. So we’ll keep liquid water as a criteria.

At the risk of sounding a bit Earth-centric here, water is an amazing solvent, and the best bet for life. Even if it’s not fair to say that water is required for life, it’s definitely impossible for organic, meat-based life to exist without SOME kind of liquid solvent – and water is both the most common compound in the universe, and liquid over a wide temperature range. The runner up here is ammonia: with lower temperatures and higher pressures, ammonia (or an ammonia/water mix) could be the solvent of life. But there’s less of it, it’s trickier to keep it liquid, and it’s generally a poorer solvent.

Regardless of the solvent used, it’s worth remembering that an atmosphere or ice cover is always required. The entire liquid phase of matter ceases to exist unless pressure is applied; on Earth, the atmosphere does double-duty of feeding you oxygen and keeping your water from boiling away. (Results may vary; see Mt. Everest for details.)

Let’s start out with Papa Bear’s porridge: it’s way too hot. We’re on a planet that’s practically in the fiery death-grip of its star, its years a scant few Earth months or even weeks long. Could we ever live here?  Could we find life here at all?

Well, you probably see where this is going: yes. Yes we can. We even have options!

In our own solar system, Mercury is the planet closest to the Sun — almost three times as close as the Earth. It could probably never support life, but it does have two rather curious features that suggest life could exist much closer to a nuclear fireball than we’d expect. It has ice-filled craters at its poles, and at night its temperature is minus 173 degrees Celsius.

Let’s not go hunting for rich biospheres on Mercury anytime soon; it’s a bit on the small side for life anyway. But its lessons are important: on a hot world, we can still find water and cooler temperatures (MUCH cooler temperatures) if we stay in the shade. With just the right sort of thin, “greenhouse-gas-free” atmosphere, some of the heat could transfer from the hellishly hot day-side to the night-side or poles to produce something approaching a temperate climate belt. More importantly, some atmosphere allows water to be a liquid, and liquid water is a great heat-transfer and heat-storage medium. Boiling, evaporating day-side oceans could rain back down on the night side of the world. The permanent storms would be epic, but reasonably life-friendly – especially for underwater life.

2. A Habitable Mars or Europa

Mama Bear’s frosty porridge represents worlds orbiting too far from their sun – at a distance equivalent to Mars or beyond. Dimly lit and locked in ice, these worlds are frozen wastelands with no hope for… oh wait, let’s add some greenhouse gases. Okay, all better. Carbon dioxide makes a great blanket for cold planets, and there’s no shortage of it in the universe. If Mars had more a Earth-like gravity and magnetic field, it could have clung to its ancestral carbon dioxide atmosphere and liquid water.

If greenhouse gases aren’t enough to keep distant worlds warm and wet, life can always find a home in the oceans beneath the ice. Europa, a large moon orbiting Jupiter, is a great candidate for nearby extraterrestrial life – and its irrelevant surface is around -200 Celsius.

3. Goldilocks and the Very Small Oven

Have you ever stood around a campfire on a cold night, roasting in front and freezing in back?  Well there are billions of porridge bowls – er, planets — out there that feel the same way.

If a planet orbits extremely close (where a year is like unto a day) to a small star, then the planet becomes tidally locked; like the Earth’s moon, it always displays just one face to its parent. This makes the whole sun-side / dark-side temperature-balance business easy, because it never changes. Instead, there would be a consistent band of “warm” at the horizon separating the permanent inferno and the permanent ice field.

When a planet is tidally locked, the concept of the goldilocks zone orbit makes even less sense. Instead, there’s a goldilocks zone on the planet itself: a ring of balmy terrain that’s closer to the sun side if the planet is farther away, and closer to the dark side if the planet orbits tightly. Life would generally prefer the side with sun (light for photosynthesis is handy) but all that really matters is keeping some water liquid — life will figure out the rest.

The life-friendly ring grows if the planet’s orbit is a bit eccentric, causing the sun to wobble in the sky and peek around to the cold side.*  And if the orbit is close enough for a fast rotation (say, ten or fewer Earth days), it can still generate a magnetic field. It’s going to need it: red dwarf stars can spew some nasty flares, and life is going to want a good deflector shield or risk extinction-level auroras.

*Some scientists believe that librations caused by an eccentric orbit would cause too much tidal heating. This may not ruin the world for life, but it may cause some pesky supervolcano-related issues.

The resourceful Goldilocks, when trespassing in a bear-house containing only frozen porridge and no stove, will find some radioactive elements to heat the porridge to a nice, warm temperature.

Wait, what?  No warm porridge and no oven?  And… aren’t radioactive elements a problem?

Let’s step back and consider what this analogy means. The house Goldilocks has found is a planet floating in the void of space with no star – or orbiting so far from its star that it provides negligible energy. An alternative heat source is needed, because life as we know it (and even most life as we don’t) needs liquid water. Conveniently, there are multiple sources that can last billions of years: slow nuclear radiation from the heavy elements in a planet’s core, tidal stress as the planet interacts with its sun or moons, or even the remnant heat of the planet’s own formation trapped by a very thick atmosphere. Biospheres that entirely ignore Goldilock’s requirements wouldn’t look like Earth’s; they would be sparse, alien, predominantly aquatic, and nothing would have eyes. They may not be the universe’s prettiest biospheres, but they’re its most common.

Could we find life in the enormous, landless, sealess void of a gas giant?

It’s not impossible, just don’t expect to recognize anything. Life has an entirely different set of problems if it’s permanently airborne. But let’s not look at the big boring ball of gas like it’s a bowl of porridge (because ew, vaporized porridge sphere). It’s best to think of it as its own tiny oven, with small bowls of porridge orbiting it – and some of them could be delicious. The moons of giant planets could be great candidates for life, and planetary heating (tidal and reflective) could expand the classic Goldilocks zone. Large planets can have multiple large moons, all of which could have similar temperatures. Finding another habitable world on their doorstep would be a hell of an incentive for mooninite aliens to develop space travel.

And one more thing: remember the tidal locking problem that worlds have if they’re really close to a small star? It’s almost not a problem for a large moon in that system: the moon tidally locks to the planet, and the planet tidally locks to the star, but the star crosses the moon’s sky and doesn’t create permanent hot and cold sides. (It might form supervolcanoes due to tidal forces, but while civilization would hate those, life is more ambivalent.)

I cheated a bit: many of these ideas are from Chris Wayan’s Planetocopia. He has some astoundingly inspirational examples, and it’s definitely worth checking out – doubly so for skeptics.

Some might see his worlds, and this post in general, as overly optimistic. We’re not living in a Star Trek universe with its infestation of class-M planets; there are plenty of worlds that will NOT be life-friendly. The reasons could include hellish lava-tides, tiny size, massive radiation, constant comet bombardment or, always a classic, lack of atmosphere. Yet most of these problems aren’t related to a planet’s distance to its star. Life-hating worlds are by far the majority, but there are billions of worlds in our galaxy alone — if even a few percent are habitable, there is going to be a LOT of life out there. And for most of this life, if it spawns an intelligent civilization, the “goldilocks zone” will be known as “all planets with tidal forces or radiation strong enough to maintain a molten water-ocean below the ice crust that protects life from the deadly surface.”  Not exactly catchy, but much more inclusive; there’s more than one good way to serve porridge.