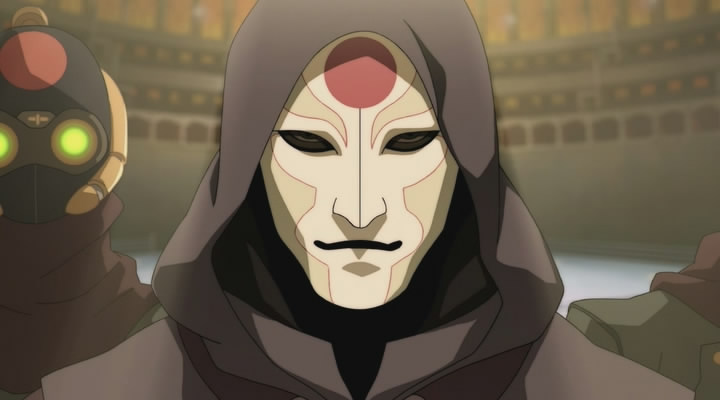 Don't hide the villain's face unless revealing it will mean something.

A great reveal can be sublime. Unfortunately, this has storytellers chasing after the perfect reveal even when their story would be better off without it. Reveals have to be set up just right to work, and some information is too critical to be withheld until a dramatic moment. Let’s look at five types of reveals every storyteller should avoid.

Spoiler notice: Legend of Korra Season One, The Fire’s Stone, Teen Wolf Season Four, Plus One.

1. The Some Guy Reveal

Who is the murderer who waits in the shadows, always one step ahead of the hero? Is it the servant who has a strange knowledge of how the murders happened? Is it the scorned lover who swore revenge? How about the angry merchant who has a fortune to lose? It must be the detective’s partner; a clever bit of foreshadowing explained how she grows the very plants the murderer kills with. But nope, it’s none of those people. It’s this guy named Bob. You’ve never heard of him before, but you saw the corner of his shadow that one time. Sure, it could have been anyone’s shadow, but trust me, it was his.

When the audience is given a big mystery hook, they expect to have the information they need to solve that mystery. For mystery fans, most of the fun is picking over seemingly insignificant details to figure out the answer. This is even more fun because the culprit is probably disguised as an innocent character. Revealing this character as a villain will have a huge impact on the story. If the villain is a total stranger the audience had no chance of catching, it’ll be a big letdown.

That’s why if a mystery is important enough to build audience anticipation, it’s critical to foreshadow the answer. In the case of a whodunit, that must include introducing the villain. Yes, some audience members will probably guess your reveal, but that’s better than making everyone unhappy. Choosing an unconventional answer to your mystery and doing your best to hide your foreshadowing will go a long way toward creating a satisfying reveal.

The hero’s entire motivation is to rescue a button. That’s right, a button. It’s a little strange that she wants it back so badly, because she could buy a new one at the store. Since she doesn’t have a solid motivation, it’s hard to care if she succeeds. At least she’s got her work cut out for her – the person who stole the button is one badass villain. She snuck into his stronghold and took the button, but now she’s surrounded by his army. How will she get out? Oh, looks like that button held a genie who is also her mother. She’s known that the whole time, and that’s why she wanted the button so badly. We didn’t know that because…  well, because.

One of the nation’s highest generals is a traitor! Hmm, I wonder if it’s the guy who’s mean to animals, drones on about strong versus weak people, and actively twirls his mustache every time he speaks. Naaahh. Can’t be him, too obvious. We’ll wait for the hero to piece together who it is, clue by clue. Finally, after carefully analyzing clues involving a whimpering dog and a mustache hair, the hero reveals how the mustache twirler is a traitor. The other characters are shocked. They put him in chains and take him away. But there’ll be another twist revealing the real traitor, right? Right???

Reveals are sublime because they aren’t expected. Unexpected twists add a boatload of novelty to the story. But these reveals are the very opposite of novel – they’re cliche. They make the story exceedingly dull instead of exciting. The audience may enjoy reading through most of the story because they think the cliche is a red herring. But when they find out it’s for real, they’ll be very dissatisfied.

Judging what’s cliche isn’t always straightforward. However, reading other works in the genre you’re writing in, particularly the very popular or classic works of the genre, will help you discover what patterns to avoid. If a classic work shocked the audience by revealing the butler did it, don’t use the butler.

If you find most of your beta readers knew the answer to your mystery from the start, you have a couple options. You can either make it less obvious – preferably by breaking more stereotypes and cliches – or you can use your original answer as a red herring and create a new one. If you change the answer, I strongly recommend reading through your entire story to make sure everything matches your new reveal.

Every night, bizarre things happen in an isolated mountain village. Flat stones with ancient runes appear near doorways. A wild, echoing wail is heard on the wind. Goats are found upside down on the roof of the tavern. As the heroes work to uncover the secret, it only gets stranger. The runes disappear as soon as they call a scholar to look at them. A goat that is removed from the roof is later found dead. Villagers are ready to flee when they discover it’s all just old man McHoggerson sleepwalking. He has these flat stones because he’s been using them to lay out a new walkway. Studying runes is his hobby, and he throws goats in the air to stay fit. That explains everything. Everything.

Implicit in every story is a promise that mysteries will be sufficiently explained before the end. Unfortunately, many storytellers make more promises than they can keep. Especially if you’re inventing the tale as you go along, it’s easy to create mysteries that are enticing in the moment while leaving yourself with no plausible explanation for everything that’s happened. Seeing a bunch of bizarre events will only raise audience anticipation for your explanation, making them that much angrier when you can’t deliver.

These failures usually happen because of a lack of coordination between different parts of the story. If you’re up for planning ahead, this is where it really pays off. Even a vague idea of what’s causing strange occurrences can help keep them in the realm of plausibility. If planning cramps your style, I recommend keeping your mysteries simple. If it’s clear that someone is stealing children, and it’s clear that they are doing it to extract magical energy, then it won’t be too hard to explain who the culprit is. However, if you have random, impossible things happening, you’ll have a really tough time explaining them all.

5. The Who Cares Reveal

A group of struggling workers all lose their jobs at the clock factory, forcing them to beg for scraps on the street. Then they begin to vanish, kidnapped by body snatchers who sell them to be used in vicious experiments. The police won’t help; they’ve been paid off. So the impoverished heroes gather who they have left, ready to go after the villain themselves. They follow the body snatchers and enter a freakish laboratory. There they fight dead but reanimated friends and witness even crueler experiments. After a struggle, they corner the villain. She confesses – she’s the one who bought the clock factory and laid them off! The heroes look at each other and shrug before getting their revenge.

For a reveal to be effective, it has to mean something to the story. A reveal that doesn’t change what choices the characters make will fall flat. If you slip in the reveal casually, it may not do too much damage. But the audience can tell when the storyteller thinks something is important. If you make a big deal out of something that doesn’t matter, it will break audience immersion and make you look silly.

To judge whether a reveal is important, consider what would be different if you didn’t make it. Would the story unfold in exactly the same way? Then it’s no big deal. You can say it in passing if you want, but don’t make it dramatic. Would an enemy be a close friend instead? At the least, that’s an important character moment. If everything would unfold in the same way, but only because your characters already know the reveal, see section #2.

Everyone loves a great reveal, but your story doesn’t need a super surprise twist to impress your audience. In the end, less flashy things such as a likable protagonist and a tense plot will be earn you the most fans.