Tim Curry as the Lord of Darkness in Legend

Bad movies can still be rewarding to watch, and not just because they’re so bad that they’re good. They might make up for terrible parts with aspects that are great, or simply create a memorable viewing experience. Take these five films: 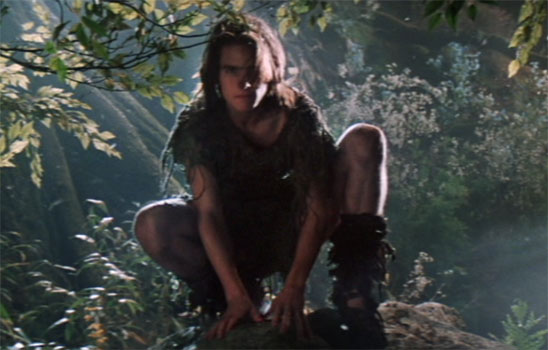 Legend stars Jack, a wild boy of unknown origins. He takes his lady love to see a pair of unicorns, but while they are visiting, one of the beasts is attacked by goblins.* Without the unicorn’s protective power, winter descends over the world. It’s up to Jack and a group of fey to defeat the goblins, before the last unicorn is killed, and the sun disappears altogether.

This movie is full of cartoonish characters and irrational occurrences. Why did Lily throw her ring off a cliff? Plot! And how did she end up in her original outfit, completely repaired, at the end of the movie? Fairy magic!

Then there’s the bad special effects. The crew built an entire forest in an enormous sound stage, then cheapened their work by dumping glitter over everything. I can hear the director now: “We need more magic; bring forth the glitter bucket!” Sparkles aside, the unicorn horns wobble, and at some points, you can see the string holding up the fairy.

The movie hints at a much larger world than the story features. It’s interesting, but sometimes confusing. The script never bothers to tell viewers that the elves age backwards, even though their lines make more sense in that context. One character looks like an elf with a goblin hand, but you never hear why he has a goblin hand or how he left the fey to work for Team Evil. The movie feels like a book adaptation that left parts out, but it’s an original screenplay. That’s because the writer, William Hjortsberg, took it from his pile of unpublished stories.

Hjortsberg wanted to create an everlasting fairy tale like those immortalized by the Brothers Grimm. It’s unlikely he understood what that would mean: his work would be adapted or just ripped off by someone else, and their version would become famous. And he probably got his wish. If you’re a Legend of Zelda fan, you’ll enjoy the uncanny resemblance to the Nintendo series. Legend was released in 1985, and the first Legend of Zelda game was published in 1986. Could it be a coincidence? Sure, why not.

Viewers will also enjoy watching a young Tom Cruise as the hero Jack, and Tim Curry as the Lord of Darkness. 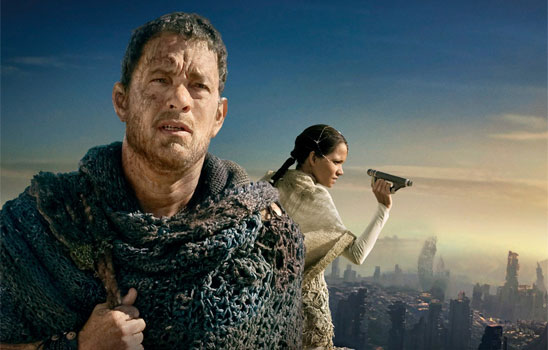 Most people would read Cloud Atlas by David Mitchell and decide it’s not right for the big screen. But not the team behind this movie. In one of the most ambitious projects ever, they decided to adapt all six stories, in six different settings. And not in sequence like The Red Violin; that would be too easy. These stories are told simultaneously, with the audience flipping back and forth between them.

And with the same actors throughout; that’s what really did this film in. The stories occur in very different places, and the characters in them are of different genders and races. Going from a story set in the Slavery-era Americas to one in far-future Korea meant changing the racial appearance of the actors with makeup. The results: not so good. To their credit, they have a diverse cast, and the gender and race bending goes both ways. Even so, it’s distracting.

That’s a pity, because the rest is gorgeous. It’s also full of subtle cues and themes you can catch if you are paying close attention. Despite the confusing delivery, the stories take place in sequence. Echoes of the previous story always show up in the next one. One character in each piece has a shooting star birthmark. Every detail is important.

But the creative team couldn’t make deciphering any of this easy, oh no. Anyone who wants to understand this movie should turn subtitles on, and watch it twice. Just missing the symbolism of a single button is enough to leave you wondering what they were trying to do.

But once you do unravel the puzzle that is Cloud Atlas, you’ll find it’s rich and powerful. It’s worth watching twice, with subtitles, while you cringe at the bad makeup. 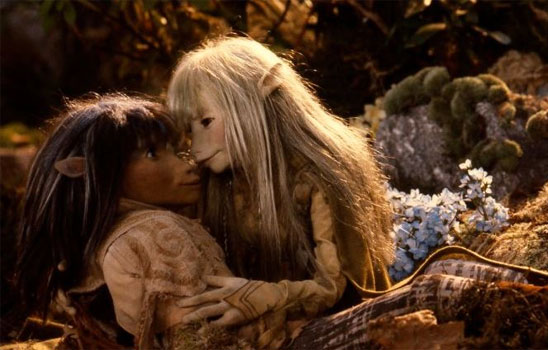 The Dark Crystal was directed by Jim Henson and Frank Oz, before they created Labyrinth. There are no live actors, the characters are all puppets. The lead puppet is Jen, the last Gelfling. Since he’s the last of his kind, naturally there’s also a prophecy about him. It says a Gelfling will heal the shattered crystal and destroy the evil overlords, called the Skeksis.

But the creators wouldn’t rely on a lazy device like the prophecy to make Jen a worthwhile character, would they? Of course they would. Jen is the most pathetic hero you’ll ever encounter. He spends his life learning music, writing, and math from the mystics, until the day his master sends him into danger. The mystics never bothered to prepare him for his journey, and just to make sure Jen can’t ask any questions, the master promptly dies.

Jen wanders around for a while, baffled by his quest and confounded by the wildlife that lives a day from his home. Finally, a mentor is introduced just so he won’t drown in a puddle. Her name is Kira, and she’s everything Jen isn’t. She speaks all the languages, knows how to avoid danger, and gets plants and animals to do her bidding. After Jen throws away an essential shard of the great crystal, she finds it for him again. Did I mention she’s also a Gelfling? She could just fulfill the prophecy herself, but unfortunately she doesn’t.

The playful puppets and cartoonish characters in this film are clearly designed for children. That is, they’re designed to give nightmares to children. If the Skeksis weren’t creepy enough, they have giant black crab spiders that make ominous clicking sounds and capture villagers en masse. Not only that, but the Dark Crystal is used to drain the life force from Skeksi captives, so their Emperor can drink it. Supposedly, Jim Henson thought fear was good for children.

But The Dark Crystal is still unforgettable. It’s one of the few films that depicts a world without humans. The setting is charming, mysterious, and imaginative. Are those rock squid things plants or animals? We don’t know, because there’s nothing like that on Earth. And despite the movie’s prophecy-driven plot, the ending isn’t just another battle between good and evil. It’s more complex, and more beautiful. 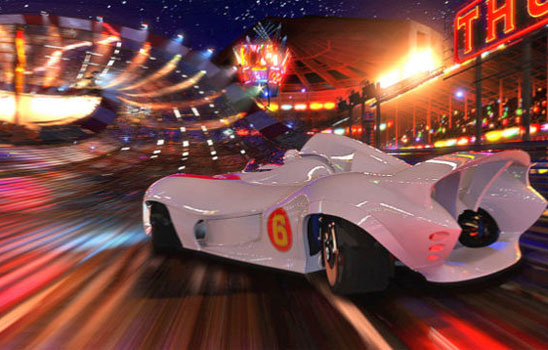 Speed Racer is a retro-futuristic romp fashioned after the anime series from the 1960s. It’s about a race car driver named, quite literally, Speed Racer. His father, Pops Racer, makes racing cars, and his older brother Rex Racer set a racing record before dying in a racing accident. Speed also has a nurturing mother, a supportive girlfriend, and a little brother who is interchangeable with the family monkey.

Even though the movie is live action, it’s styled to resemble the original animation. The recording team developed a high definition layering technique to keep both the foreground and background in focus, giving the movie an illustrated look. Over-saturated colors, green screens, and character wipes run rampant throughout the film. Once you add in the imaginative cityscapes and loopy race tracks, there’s no comparison for the visuals in this film.

Speed Racer is so predictable, it must be on purpose. Could the mysterious Racer X actually be Rex Racer in disguise? Never. It’s not like characters ever come back after they’ve been announced dead. And the screenwriter must have received a crisp twenty for every trite line of dialogue, because in this movie, clichés have become an art form.

Menacing gangsters, random ninjas, and corporate crooks all show up to keep Speed and the family business down. Is it believable? Not in the slightest. But it’s fun. 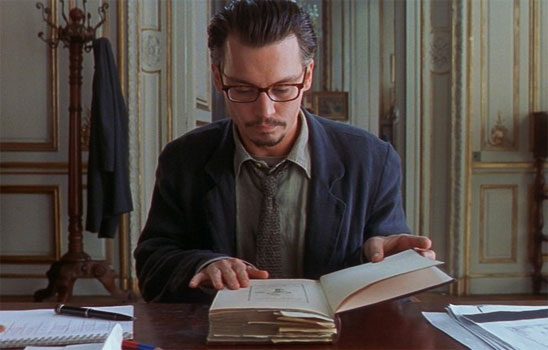 The Ninth Gate stars a young Johnny Depp playing an older protagonist. Dean Corso is an unethical rare book dealer who is tasked with investigating three satanic books. Along the way he meets many mysterious characters with their own agendas. Often these characters are interesting, but occasionally they’re too wacky to believe.

It sounds like a Tim Burton film, but it’s actually by Roman Polanski, and his style couldn’t be more different. Where Burton films are heavily stylized, The Ninth Gate is understated. Other than an emphasis on old books and architecture, the visuals in the movie resemble ordinary life. Subtle details and creepy music create an atmosphere of dark mystery, and that’s the linchpin of this story.

Which is a problem, because The Ninth Gate bills itself as a thriller. The creepy scenes in most thrillers are just for buildup. At some point the plot quickens, the monster is revealed, and it’s heart-thumping the rest of the way. But the Ninth Gate refuses to provide real thrills. It begins with a few quiet scenes to establish the main character, casually introduces the central plot, then slowly turns up the heat for the rest of the movie. There are deaths, but they aren’t very graphic. The protagonist faces danger, but it falls far short of terrifying.

While not thrilling, The Ninth Gate is intriguing. It’s rich in visual symbolism; if you watch closely you can see the symbols repeat across illustrations, live action, and tattoos. These and other hints are presented throughout the movie, and you’re invited to piece them together. But just as the pieces come together, the movie ends. The closing is as mysterious as the rest, leaving the audience to ponder all the clues the movie presented, and decide if they even make sense.

If the creepy atmosphere doesn’t work for you, the movie will fall flat on it’s face. But if it does, you’ve found a new favorite.

It’s rare – perhaps impossible – to find a perfect piece of media. A movie may not deliver on the promise it made, but that doesn’t mean there isn’t anything to appreciate about it. A memorable setting, character, or message in a flawed film is worth more than a whole movie that is well-executed, but forgotten.

Somehow it’s the lady’s fault that this happens.

Comments on Five Terrible Movies You Should Watch