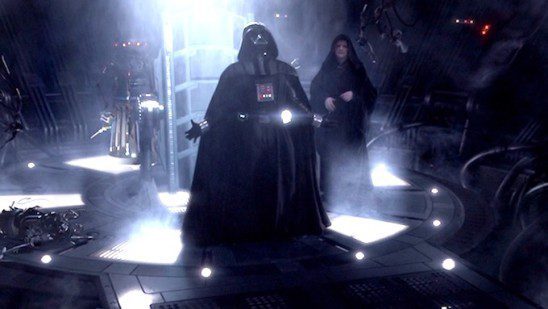 The Star Wars prequels are terrible. This should not be a controversial statement. We all remember Anakin’s virgin Force birth, the midi-chlorians, the romance dialogue, the awful plotting. Rarely have films been so roundly and rightly criticized. And yet, I sense a disturbance in the internet. In recent years, people have taken to writing defenses of Episodes I-III. Were we mistaken? Were we too hard on Lucas and his vision? No, we were not. Similar threads run through each of these defenses, and they’re all nonsense.

1. You Loved the Original Trilogy, so You Have to Love the Prequels

If this article from Furious Fanboys is to be believed, disliking the prequels means you’re not a real Star Wars fan. To call yourself a fan, you must love every element of a property unconditionally. This idea is so absurd I almost didn’t include it, except that it’s so common!

You see this with any beloved franchise. Real Trekkies must like all Star Trek, even Enterprise. No true Battlestar Galactica fan could have a problem with the “let’s throw all our technology into the sun” ending. It’s a reactionary statement from people who don’t want to think critically about something they like. It’s leveled at social justice advocates all the time, and now it’s being wielded in defense of the Star Wars prequels.

Being critical doesn’t make you less of a fan. It means you’re thinking, which is never a bad thing. If you care about something, you want it to be better. It makes us better at telling our own stories, because we’ll avoid the mistakes of others.

2. The Prequels Were Ambitious, so Cut Them Some Slack

According to this admittedly well written article from The Mary Sue, the prequels deserve our respect because they swing for the fences. They’re full of big ideas, going further than the original trilogy ever dared. So what? Ideas are cheap. Any random Star Wars fan can give you a long list of big ideas for how they’d have done the prequels. We pay money to see films because we want to see ideas executed well. That’s what takes talent.

Star Trek V was a film about meeting God and finding out that God was an evil alien. That’s a big idea if ever I heard one. M. Night Shyamalan’s Last Airbender tried to fit an entire season of television into 90 minutes. That’s certainly ambitious. Ambition doesn’t matter if it doesn’t get results. A well executed, small-scale story is better than a flop with big dreams.

The Mary Sue article also praises the prequels’ worldbuilding. True, they did show us a lot about the Star Wars universe we didn’t know before. Problem: it was all terrible. We found out the Republic is an organization that makes decisions for the entire galaxy but has no means to enforce them. We found out about nonsense prophesies. We learned the Jedi were a bureaucratic, sex-negative cult. More is not always better.

The political storylines of Episodes I-III are equally ambitious, and equally bad. How did a senator from backwater Naboo end up in the running for Supreme Chancellor, and why didn’t anyone find it suspicious? Why did so many systems want to leave the Republic in the first place? Why did the Jedi think that was worth fighting over? The politics have so little context that they’re impossible to care about.

The original trilogy wisely kept a tight focus on what it was good at: emotionally charged action scenes. The prequels want to have it all. Politics, action, a sprawling world, poop jokes, forbidden love, the list goes on. That’s part of why they’re so bad in the first place.

Let me tell you something that will blow your mind. Many scenes and plot threads from the prequels are similar to those found in the original trilogy. Wait, you already knew that? Because this manifesto on Star Wars Ring Theory insists that those similarities are proof that the prequels are brilliant, and none of us are clever enough to see it.

The argument is that similarities between Episodes I-III and IV-VI mean the stories resonate with each other, creating a greater whole. This is supposedly so subtle that everyone missed it.

Full disclosure, I’m only addressing the first page of Mr. Klimo’s work. That page alone is nearly 4000 words, and it contained so many errors I did not continue. Maybe the next eight pages are better, but I doubt it.

The concept that the prequels echo the original trilogy isn’t new. Lucas himself has talked about it in interviews. But it doesn’t mean anything. If the prequels had been good, it would have been neat to see cameos and references back to the older films. But they’re not good. Instead, these references come off as Star Wars running out of new ideas.

In Episode I, Anakin blows up a giant Trade Federation ship by hitting its weak point with torpedoes. Obviously, this is a call back/forward to Luke destroying the Death Star by hitting its weak point with torpedoes. Except Luke’s scene works. They spent the whole movie building up to this design flaw in a brand new battle station that hadn’t been fully tested yet. Even knowing the weakness, it’s nearly impossible for the Rebels to pull off their attack. In Phantom Menace, we’re left wondering why Trade Federation ships have such a crippling structural flaw on display in their docking bay, and why attacking it is so easy.

Phantom Menace’s opening is sometimes compared to Return of the Jedi’s opening, both involving shuttles with unknown passengers docking at a large ship. Except in Jedi we know what the Empire is. We’ve spent two movies learning to fear them. So when a mysterious Imperial shuttle flies towards a second Death Star and ominous music plays, we know to be scared. In Episode 1, we don’t know anything about this shuttle, who’s on board, or the ship they’re flying toward – just that they’re apparently there to negotiate a trade dispute. That’s an underwhelming way to open your story.

Repeating a theme or plot thread does not magically make a story good. Any time someone tells you that a work was secretly brilliant, and needs many thousands of words to explain why, you should be suspicious.

Many articles and personal anecdotes agree with this post from Blastr. Phantom Menace and Attack of the Clones were bad, but Revenge of the Sith was a return to form for Star Wars. Except not. It’s true that Episode III is the best prequel, but that is a low bar to jump. When judged on its own merits, it’s an awful film.

When people talk about Revenge of the Sith, they always mention how dark it is, as if dark were a synonym for good. It’s true that Revenge of the Sith is dark, but that’s not enough. Like the other prequels, the dialogue is stilted and unnatural, the acting/directing* feels fake, and the plot is nonsensical. Being dark doesn’t fix any of that.

Obi-Wan spends most of the film chasing after a brand new villain we’ve never seen before. General Grievous* only exists because Dooku gets killed in the first act, and the film needs a bad guy to distract from Palpatine. So instead of the antagonist we have history with, let’s chase after a droid that has biological organs for some reason. Grievous raises many questions, and then answers none of them. And no one’s impressed by his lightsaber-lawnmower act.

As the final film in the new trilogy, Revenge of the Sith needed to tie off story arcs. Instead, we get filler. If Dooku had lived, at least the decoy villain would have been someone we knew. Heck, maybe the scene from Attack of the Clones where he bizarrely tries to warn Obi-Wan about Palpatine infiltrating the Republic could have gone somewhere.

Let’s not forget that Padme, the sole female main character, spends almost the entire movie in her room crying. This is a woman who led a military assault against the Trade Federation at age 14. When she sees the Jedi Temple burning, does she leap into action? Does she call her political contacts to figure out what’s going on? Does she try for one last, doomed effort to stop Palpatine? No, she waits for her boyfriend to get back and tell her what’s happening. It’s like the writers took “pregnant” to mean “invalid.”

The whole plot is mercilessly bent and twisted so it can arrive at the required destination. Instead of fighting the Emperor together, Yoda and Obi-Wan inexplicably split up, even though they were about fifteen minutes away from Palpatine’s office. The entire Jedi Council proves easier to kill than one young padawan. Anakin somehow concludes that Padme will die in childbirth from a vision of her pained face.

Then there’s the dialogue. From “Only a Sith deals in absolutes” to “Anakin, you’re breaking my heart,” it ranges from mediocre to awful. Do I have to bring up the scene where Mace Windu walks sedately down a corridor in reaction to finding out that the Chancellor is a Sith lord? By any measure, Revenge of the Sith is a bad movie. It’s just not quite as bad as its predecessors.

5. You Love the Original Trilogy Too Much

This argument, as articulated by Brian on Star Wars, doesn’t address the prequels as films at all. Instead, it pushes the idea that over-hype and nostalgia created a situation in which the new films could never succeed. Once the negative reviews started, the rest of us changed our opinions to go along with peer pressure.*

First, this argument is condescending. It’s the equivalent of patting someone on the head and saying, “You think that because you don’t know any better.” When you abandon the relevant facts of a discussion and accuse those who disagree with you of having suspect motives, it shows your case is weak. The prequels can’t stand on their own, so you imply their detractors aren’t objective.

Second, it’s a circular argument. One could just as easily say that people who enjoy the prequels only like them because they’re unwilling to criticize Star Wars. Or perhaps they’ve fallen victim to the sunk cost fallacy and don’t want to think badly of something they paid to watch. See how condescending that sounds?

The idea that hype ruined the prequels doesn’t make sense either. How often has being excited for something made you enjoy it less? On May 19, 1999, the atmosphere was perfect for fans and newcomers alike to love a new Star Wars film. They didn’t because the film was terrible.

The final fallback position for this argument is that people often dislike new additions to established franchises. That’s certainly true. Prometheus, Indiana Jones and the Kingdom of the Crystal Skull, Star Trek: Enterprise, all badly received. Of course, they were all really bad. When a new addition is good, fans love it, like Terminator II, Aliens, and the Battlestar Galactica reboot.

If someone writes an article about how some fans go too far in their hatred of the prequels, I’ll be right there with them. They’re just movies, and the amount of personal abuse heaped on those who like them is inexcusable. But claiming they weren’t bad is simply false.

Because it’s hard to tell where one ends and the other begins.
Grievous, really? That name might just be too subtle for some people.
Note that Brian does eventually move on to defending the prequels as films, but not until after the halfway point.