It’s no secret that The Last Jedi diverges significantly from its predecessor, The Force Awakens. Whether this is the death of the Star Wars franchise or the greatest event in the history of science fiction depends on who you talk to, but it’s clear that Rian Johnson has upset the groundwork laid down by JJ Abrams. Whether it’s Snoke’s backstory, the state of the Resistance, or Rey’s parentage, Johnson has shifted the trilogy in a new direction.

Abrams must now retaliate. With the news that he will be directing episode nine, we’re bracing for a host of plot points that will undo Johnson’s work and restore a galaxy far far away to what Abrams thinks it should be. Some of this is normal when there’s a change in directors,* but this time it’s clearly personal. Here’s what you can expect in episode IX.

Spoiler Notice: The Last Jedi and The Force Awakens.

1. Chewbacca Is the Chosen One 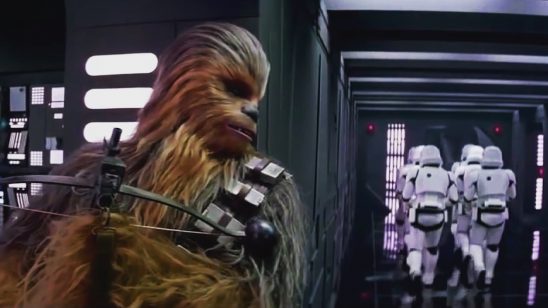 In The Force Awakens (TFA), Chewie was a better character than he’s ever been before. He had thoughts and opinions. He came up with better plans than Han. He’s even the first to express his grief when Han dies.* In The Last Jedi (TLJ), his role is, shall we say, lessened.

In this new film, Chewbacca’s accomplishments are restricted to kicking down a door, getting guilt tripped about eating porgs, and shooting some TIE-fighters. We can only assume that if Johnson were directing episode IX, Chewie would be further reduced to a handsome fur rug.

But now Abrams is back in charge, and he’s not gonna let the Wookiee languish. To show Johnson what’s what, I predict that Chewie will be the revealed as the true chosen one. He’ll be a Jedi, of course, with a bowcaster that shoots lightsabers, but that’s not enough. Maz, everyone’s second-favorite wisdom dispenser,* will reveal there is an ancient prophecy about how only a Walking Carpet can defeat the Sith and bring balance to the Force.

If Abrams wants to get really extreme, episode IX might even feature subtitles for Chewbacca. GASP!

2. Luke Is the Nicest Force Ghost 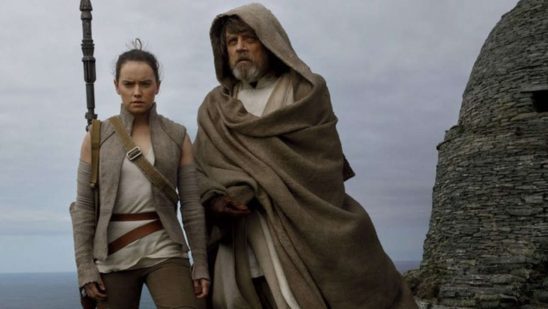 Except for the brief sidequest to destroy Starkiller Base,* The Force Awakens is all about finding Luke Skywalker. Specifically, it’s about Rey finding Luke so she can learn from him. The film even ends with Rey holding out Luke’s old lightsaber,* waiting for a response.

Two years later and Luke’s reply is to be a real jerk. He casually tosses the lightsaber off a cliff, as if to mock the expectations built up from TFA. Not only does he refuse to train Rey,* but he’s not even interested in stopping the First Order. We find out he’s known about Snoke for years, yet he’s done nothing. For better or worse, this is a far cry from the Luke we knew in the original trilogy.

When Luke finally gets off his butt to help the Resistance, the effort literally kills him. This would seem to make it impossible for Abrams to make further alterations to Luke’s character, but that’s what Force ghosts are for. I predict that episode IX will begin with a transparent Luke appearing to Rey and saying how sorry he is. Then he’ll lead her on the wonderous training montage we all expected. It should only take half the movie.

In addition to training Rey, Ghost-Luke will be very encouraging to the other characters, take back his badmouthing of the Jedi, and talk about how cool and heroic the Resistance was when they were fighting Starkiller Base. And since Force ghosts can affect reality now (unless Yoda was just pretending to bring down lighting on that tree), Luke will probably have a duel with Snoke too. What’s that, you thought Snoke was dead? Well…

3. Snoke Is Two Siths in a Trenchcoat Supreme Leader Snoke was one of the bigger question marks around TFA. Audiences wondered where he came from and how there could have been a darkside Force master loose in the galaxy so long* without anyone hearing about him. Viewers also had questions about Snoke’s goals and motives. Was he trying to restore the Empire or build something new? And why?

These questions would have been hard to answer considering how little context TFA provided. It’s understandable, if disappointing, that Johnson decided not to try. Less understandable is having Snoke killed off before the film had reached its climax. I’m sure we’re all quaking in our boots now that Kylo is in charge of the First Order instead of the guy who could apparently read minds from halfway across the galaxy.

Of course, Abrams won’t take this lying down, but how can he fix it? Snoke’s death was pretty explicit; he was cut in half and left on the floor! But this is Star Wars, where tiny aliens abound. In episode IX, it will be revealed that Snoke was not a single Sith master, but TWO Sith masters wearing a single robe of gold lame.

Snoke’s glorious return will be marked with a monologue about how Kylo’s lightsaber attack did nothing but force Lower Snoke to let go of Upper Snoke, and the two played dead as part of their evil plan. What that plan is will remain a mystery, but both Snokes will continually hint about it for the entire film.

4. Rey’s Parents Are Everyone

In The Force Awakens, the only question bigger than those around Snoke was that of Rey’s parentage. This wasn’t simply hinted at or left unexplained; Rey’s wondering about her parents was a major plot point. Considering how important family lineage has been in previous Star Wars films, it’s unsurprising that fans have spent considerable energy speculating on the issue. Obvious choices like Luke, Han, and Leia* have been floated, as have more unusual ideas like Obi-Wan Kenobi or Emperor Palpatine. Some fans even thought Rey’s parents might be two characters from the video game Battlefield II.*

Unlike with Snoke, The Last Jedi does actually answer this question, when Kylo Ren tells Rey her parents were junk-dealing nobodies who sold her for booze money. This was a major shock to many, and clearly not what Abrams had intended when he filmed that shot of Rey’s parents leaving in a spaceship for TFA.

Ordinarily, Abrams could simply write dialogue claiming Kylo was lying or misinformed, but there’s a problem. Love it or hate it, Kylo’s revelation casts a shadow over the entire question of Rey’s parentage. It makes obsessing over their identity seem absurd, because what difference could it really make? Even if her parents are still alive, they’re unlikely to make up for abandoning her on Off-Brand Tatooine,* and she doesn’t need famous parents to legitimize her exploits.

In that context, any normal reveal will seem lackluster, even sheepish. Abrams’s only option is to up the ante. It won’t do for one or even both of Rey’s parents to be someone we know. Instead, he’ll have to reveal that Rey was created in a lab with DNA from every main character of the Star Wars original trilogy. That’ll show Johnson for daring to imagine you don’t need famous parents to be important. Maybe Lando can deliver the news; it’s weird we haven’t seen him in the new films yet. 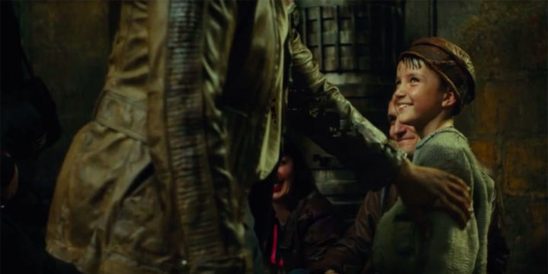 The Last Jedi is, to put it mildly, a bit of a downer. Nearly everyone except the main characters is dead, the First Order is ascendant, and Kylo Ren is firmly irredeemable.* It’s hard to see how the Resistance* can possibly come back from such a crushing defeat.

In an effort to lift the mood a little, Johnson ends the film with a scene of some kid Force-pulling a broom to his hand and then playing with a Resistance decoder ring. It’s uplifting, you see, because hope is still alive in the galaxy’s tiny children. I’m sure that will be a substitute for the trained soldiers the Resistance no longer has.

There are even rumors going around that this kid is going to feature heavily in the next Star Wars trilogy. I hope that isn’t true, both because the kid’s name is Blagg and because giving Star Wars back to the white boys would just be sad at this stage, but it doesn’t matter what I think. This kid seems important to Johnson’s vision for Star Wars, and that means Abrams must destroy him utterly.

Abrams has a number of options at his disposal. If he wants to show maximum disdain, he could have Broom Kid* fall into a trash compactor as a comic scene-ender. That could send Johnson the message that his version of Star Wars is literal garbage. But I’m betting Abrams will want to make more of a production of it. I’ll lay good odds that Broom Kid gets eaten by a sarlacc, the sarlacc is eaten by a space slug, the space slug is blown up, and then Kylo Ren slices up the remains with his lightsaber. That’ll demonstrate whose war has the most stars for sure.

The Force Awakens and The Last Jedi both have their pros and cons. Without more distance, it’s hard to say which film will end up being more influential on the Star Wars franchise. One thing is clear though: Abrams and Johnson have very different visions for a galaxy far far away. It’s too bad Abrams only gets one more film to return fire, while Johnson is getting an entire trilogy. If Disney really cared about us, they’d alternate Abrams and Johnson each movie. It would be like watching a Twitter feud played out in multimillion-dollar films. Or maybe they could get a director who isn’t a white dude, but we don’t want to be too extreme here.

No matter who directs IX, they’ll have to up the number of surviving Rebels, or there’s no movie.
But why don’t he and Leia hug? WHY?
Sorry Maz, but Yoda you are not.
Which absolutely wasn’t just the Death Star again, Abrams promises.
How did you get that, Maz? HOW?
She somehow gets more powers anyway.
Snoke appears to be quite elderly.
Hopefully not Luke and Leia at the same time.
If that were the case, they’d have appeared in a loot box.
I will call it Jakku when Abrams admits you can’t see planets exploding from half a galaxy away.
We hope.
Or are they the Rebellion now? I’m not sure even the characters know.
Better name than Blagg.