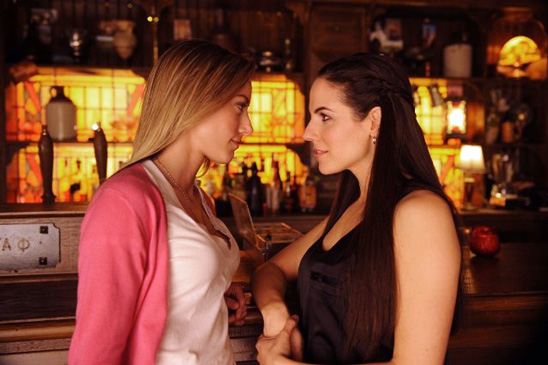 In Lost Girl, Lauren is trying to fit into Fae society when rule-breaking Bo comes along.

Relationship dynamics are like archetypes for romance – they provide a template for storytellers to start from. While there are many types of dynamics, these do something specific: show how each person in the romance benefits from the relationship. Mutual benefit gives the audience a reason to cheer for a romance, helps characters build a deeper connection, and ensures the relationship isn’t one-sided. Let’s have a look.

Classified by the fandom community, this one is so popular and effective it’s simply called “the Dynamic.” The lovebirds in the Dynamic are called the absolute nightmare and the sweaterboy.* Deep down, the absolute nightmare and the sweaterboy have a lot in common – neither of them fits into society for similar reasons. But they’ve chosen to cope with this in different ways.

The sweaterboy chose to conform to the expectations of everyone around them. As a result, they seem like a model citizen: mild, responsible, and generally well-liked. However, conforming has made them unhappy.

The absolute nightmare decided to live life on their own terms. They are a free spirit – flamboyant and rambunctious. However, their choice to be true to themself has isolated them. As a result, they’re lonely.

You might notice that the absolute nightmare sounds a lot like the manic pixie dream girl. The difference is that a manic pixie dream girl doesn’t get anything out of her relationship. In addition, the dude she’s dating isn’t unhappy because he’s living to please other people; he’s just bored and boring.

2. The Idealist and the Machiavellian

The idealist and the Machiavellian are both people who work in passionate pursuit of an external goal – whether it’s saving the whales or inventing the first warp drive. Their goals are similar and compatible at some level, but their approaches are at odds. The Machiavellian has a pessimistic view of the world; they will use any means to accomplish their goal. The idealist has an optimistic view of the world; they hold their own methods to an unrealistically high standard.

Apart, neither the Idealist nor the Machiavellian can succeed at their goal. Their devotion to their approaches means they ignore important context and make the wrong decision as often as not. What’s more, even though they ultimately want the same thing, they keep sabotaging each other. Their goal is so important to them that if things aren’t going their way, they’re tempted to take matters into their own hands.

But once they come to understand one another and learn to work together, they realize they’re more successful that way. Their different perspectives balance each other out, giving them strategy that takes more into account. After discussing what to do and coming to an agreement, they make better decisions.

For this dynamic, you can use any two viewpoints that are sharply opposed to one another. Your lovebirds could have different backgrounds or different areas of expertise, as long as both perspectives have something to offer but pull the characters in opposite directions.

3. The Protector and the Nurturer

The protector knows how to survive in a harsh world, but lacks the social or emotional support they need to thrive. The nurturer is a caring person who easily bonds with other people, but is vulnerable to outside threats. As you might guess, the protector defends the nurturer, and the nurturer cares for the protector.

This dynamic is really common for heterosexual relationships, as the protector is a stereotypically masculine role and the nurturer a stereotypically feminine one. This makes it a little dull when it’s not combined with something novel. For Grey Worm and Missandei, their similar background gives them shared hardships and makes it feel particularly empowering when they find strength in each other.

There’s other ways to switch it up. Most obviously, there’s nothing stopping storytellers from doing a gender reversal of this dynamic. Disrupting the typical masculine and feminine roles will create more interesting characters and a more memorable romance. This may still be helpful if you are depicting a queer couple – consider making the character that is otherwise more masculine the nurturer, and vice versa.

You can also give both characters some aspects of protector and nurturer. Maybe one character protects from magical threats and does first aid and the other protects from ordinary attacks and provides more emotional support.

Like the absolute nightmare and the sweaterboy, the lovebirds in this dynamic have trouble being a part of society. But instead of being forced to conform or be outcast, they manage to stay in society while not being entirely welcome there. They have important relationships with people they care about, often family members, but those relationships are filled with friction. They are put in a position of constantly explaining themselves and trying to get the respect and accommodations they need.

When they meet each other, they have an instant connection. They don’t need to teach each other how to be supportive and respectful. They accept each other without lengthy explanations, and they get along without a hitch. When they’re alone together, they can just relax and be themselves. When other people are around, they tag team difficult social interactions, explaining each other’s needs and setting boundaries.

Often this dynamic is easiest to pull off if the lovebirds are different in the same way. That provides an explanation for why they understand each other so easily. However, they may also be uniquely set up to meet each other’s needs. One of them may be uncommonly accepting; the other could understand how to meet their partner’s needs from previous experience.

5. The Worldly Cynic and the Naive Shaker

The cynic is a clever person who tried for years to accomplish something important but ultimately failed. They realized making things better was simply not within their means, and they gave up trying. As a result, they’re wallowing in misery, working toward selfish ends, operating under the direction of Team Evil, or all of the above.

The shaker is new on the scene, fighting the good fight for the first time. Despite bumbling their way through everything, they are doing surprisingly well. That’s because they are blessed with something the cynic doesn’t have. Most likely, it’s a special skill or ability, but it could be anything inherently tied to them that gives them an edge. Although the shaker is optimistic, they have no idea what they’re getting into. As the struggle grows more intense, they end up in hot water.

The cynic sees their old self in the shaker, sparking empathy. After helping the shaker get back on firm ground, the cynic realizes that their goal is once again attainable. With help from the cynic, the shaker gains a better understanding of their opposition and becomes savvy enough to succeed.

When using a cynic and shaker, keep an eye on both gender and power dynamics. If the cynic is a man and the shaker is a woman, and they have equal prowess, the relationship will start looking paternal. To keep them on equal footing, the shaker should have important capabilities the cynic lacks. For hetero relationships, a gender reversal will make the romance feel more fresh.

Just as with most of our instructions on creating romances, these dynamics are not limited to romance. You can also use them for a buddy cop story. The primary difference is that platonic relationships don’t require a careful power balance. You might end up with a hero and a sidekick or a mentor and student. When the relationship you’re depicting is romantic, make sure your characters are equal partners.

The latter is named after Watson and his sweaters, but the sweaterboy is not necessarily a boy.