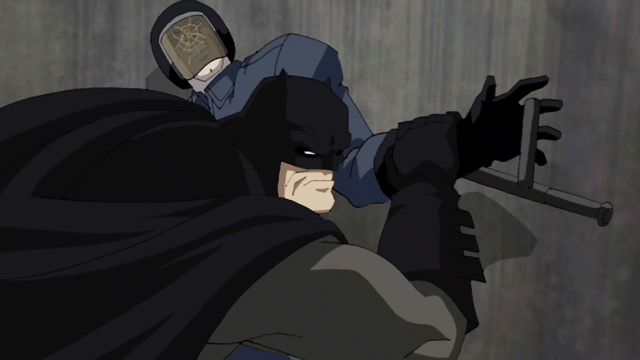 Popular media is rife with psychopaths. In fact, psychopaths are more common than you might think. Psychopathic villains often serve as foils for heroic deeds, but there are psychopathic heroes, too.

Despite its common use in media, there is no universally recognized clinical definition for psychopathy. The Diagnostic and Statistical Manual of Mental Disorders* doesn’t even list psychopathy as a disorder.

However, psychopathy is a defined term in law enforcement. 15-20% of male criminals are considered to be psychopaths, and they require different tactics. Therefore, various law enforcement agencies have determined six common psychopathic traits that can be used to identify them:

These five characters vary widely in demeanor and method, but they all have these elements in common.

Bond is suave, confident, and faces down danger without blinking. These things make him an interesting character, but they also make him a psychopath.

Bond uses people to get what he wants. In Live and Let Die, he meets Solitaire, a fortune teller. She gives Bond a tarot card reading that predicts that she and Bond will become lovers. This prediction makes her uncomfortable, but Bond doesn’t care about what she wants; he stacked the deck in order to trick her into sleeping with him. This type of manipulation is common among psychopaths.

Anyone who has seen more than one Bond movie knows that he’s overly fond of bad puns. In Live and Let Die, Bond kills the villain Kanaga by using pressurized air. Kanaga fills up like a meat balloon, floats to the ceiling, and explodes with a satisfying pop. Bond, undeterred by the gore, says, “He’s always had an inflated opinion of himself.” He is such a callous killer that he thinks it’s appropriate to crack wise after murdering someone.

Bond’s existence is undeniably dangerous. He moves from one emergency to the next, dealing with lethal goons and lieutenants in a series of rapid-fire life-or-death situations. In any given Bond movie, he’s being shot at often as not, and it never seems to bother him.

The fact that Bond is comfortable with a violent job doesn’t make him a psychopath, as there are a number of reasons he could feel that it’s worth it, such as the money or a sense of patriotism. But those things don’t seem to be driving him. Instead, it appears that Bond gets a kick out of violence and danger. Risk-prone behavior is another trait associated with psychopathy.

2. Batman in The Dark Knight Returns

Although Batman and Bond both direct their violence at the “bad guys,” where Bond and Batman differ is how they deal with authority. Bond (mostly) follows orders, but Batman is known for disregarding authority. In Miller’s The Dark Knight Returns, Batman’s vigilante actions put him at odds with Gotham’s politicians. Eventually, the President gets involved, but not even that deters Batman in the slightest. This reflects his gargantuan self-importance: no one else’s opinions matter.

Batman is unafraid of risk, as illustrated by his fight against the mutants. He uses a giant tank to kick the crap out of the goons, but when the mutant leader calls Batman a coward, Batman leaves the safety of his tank so he can fight the leader in hand-to-hand combat. Later on, Batman hears that Superman is out to get him. No one would have blamed him for hiding or surrendering, but instead, he opts to don some power armor and throw down with a God-like alien. Batman’s conviction that he’s the best is unshakable.

Most criminals stick to a single tactic or form of crime once they find one that works. Psychopaths will branch into other forms of crime depending on their needs and available victims. Batman uses a number of methods to get what he wants, resorting to a wide variety of tactics in his war on crime. Over the course of The Dark Knight Returns, he uses fear, intimidation, overwhelming force, humiliation, allies, trickery, and gadgets to get results.

Batman is also excellent at deception; using Bruce Wayne as a mask comes naturally to him. At the end of the story, when Batman is forced to give up his Bruce Wayne persona, he fakes his own death and starts a new life training the former mutant army to become vigilantes like himself. Batman has no trouble switching from one disguise to another when convenient; he’s a pathological liar.

3. Mandy From The Grim Adventures of Billy and Mandy

Mandy is a great example of a non-violent psychopath. She’s domineering, manipulative, and has difficultly empathizing. She treats Grim, Billy, and every other character in the show as tools.

Her lack of friends is telling; they include Billy, a drooling moron, and the Grim Reaper, who’s only her friend because he lost a limbo contest and got shanghaied into being her best friend. It’s apparent she has trouble forming meaningful relationships with other people, signaling a lack of empathy.

In the second episode of season three, “Puddle Jumpers,” Billy goes through a cosmic sinkhole and ends up across the world. According to Grim, it would be both dangerous and hard to follow after Billy, and he doesn’t want to risk it. Mandy has different plans, though. She bosses Grim into helping her find Billy. However, Mandy wants to find Billy because he’s her science project, not because she cares for his safety.

Mandy is also incredibly proud. In episode seven of season four, “Pandora’s Lunchbox,” Dora tricks Mandy into opening her box. Mandy is later presented with the opportunity to close the box, which will prevent an eternity of suffering and chaos for all of mankind. Despite Dora’s encouragement and Mandy’s life goals,* she still closes the box. Why? She’s pissed that she was tricked, and insists that she’ll punish mankind on her own when the time comes. Her self-importance overruled her lack of empathy, in this case.

Mandy has the tell-tale signs of psychopath, but she’s different from common expectations; when most people imagine a psychopath, they likely imagine someone male, violent, criminal, and an adult. Mandy’s a young blond girl who regularly wears a pink dress, which causes a disjunction between what most people expect and how she actually acts. This discrepancy makes her more interesting as a character.

4. The Comedian From Before Watchmen: Comedian

If the Joker joined the US Army and stuck with it, you’d end up with someone similar to the Comedian. He’s violent, unpredictable, deceptive, lacks empathy, and takes giant risks. However, because he works for the government, a lot of his behavior is sanctioned.

While coordinating a bust with federal agents, they ask him to play it subtle. He responds by slamming on the gas, driving through a wall, and shooting all of the thugs. He’s got brass balls and doesn’t take orders well.

Near the end of the comic arc, the Comedian murders a village filled with hundreds of non-combatants. When one of the soldiers who helped him has a moment of doubt, the Comedian begins to lecture him. He claims that he’s really a patriot at heart, but people don’t understand him. He says, “These f**king people. They’re not OUR women and children.” In typical psychopathic fashion, he’s making excuses to manipulate the situation. It’s clear that the Comedian doesn’t feel any remorse for his actions.

When the Comedian realizes that he may have to deal with the consequences of mass murder, he murders an old friend to avoid facing the music. Psychopaths will typically never face consequences if they can avoid them.

Gran’ma is one of the cruelest and coldest villains I’ve ever encountered. All of the other characters I’ve listed here today are heroes or protagonists; even the Comedian, a violent and brutal madman, isn’t as ruthless as she is.

Gran’ma is Jesse Custer’s evil grandmother. She dreams of making the L’Angelle family into something powerful, and she uses Jesse to gain this end. She murders his parents and does all kinds of awful things in order to manipulate Jesse into becoming a minister.

Gran’ma uses many strategies to get what she wants from Jesse. Often, her abuse is psychological. After ordering the murder of his parents, she whispers into his ear, “look what you have done.” She also physically torments Jesse using a device known as the coffin (don’t ask, it’s pretty bad). He is only a child at the time, yet she has no qualms about punishing him. Whenever her current method stops working, she changes to another, equally brutal tactic.

Gran’ma is undeniably certain of her importance. She thinks it’s her right to control Jesse’s life. After Jesse retaliates for years of abuse by kicking the crap out of her goons and lighting her house on fire, she insists he must die for his insolence. This kind of narcissism is the most common of the psychopathic traits. Gran’ma is convinced that if she can’t win, no one will.

Like Mandy, Gran’ma doesn’t look like a psychopath. She’s a frail, hunched octogenarian, connected to an oxygen tank and confined to a wheelchair. No one expects a little old lady to arrange the murder of her relatives or to physically and emotionally abuse her grandson.

Female psychopaths appear infrequently in fiction, and when they do, they’re generally more manipulative than violent. When they are violent, they often use proxies. Gran’ma uses her goon, Jodi, and Mandy uses Grim. Although this pattern also happens with real female psychopathic criminals, you don’t have to stick to it. Psychopaths do prefer to use many different methods and tactics, after all.

This is just handful of the types of psychopathic characters that exist. Psychopaths are complicated and varied; they exhibit the same traits in many different ways. If you plan on writing a psychopathic character, make sure to do your research carefully, since there’s a lot of misinformation available.

Also known as the DSM, this is the standard used by most psychologists in the U.S. for determining the definition of mental disorders.
She wants to rule the world and turn it into a dystopia.