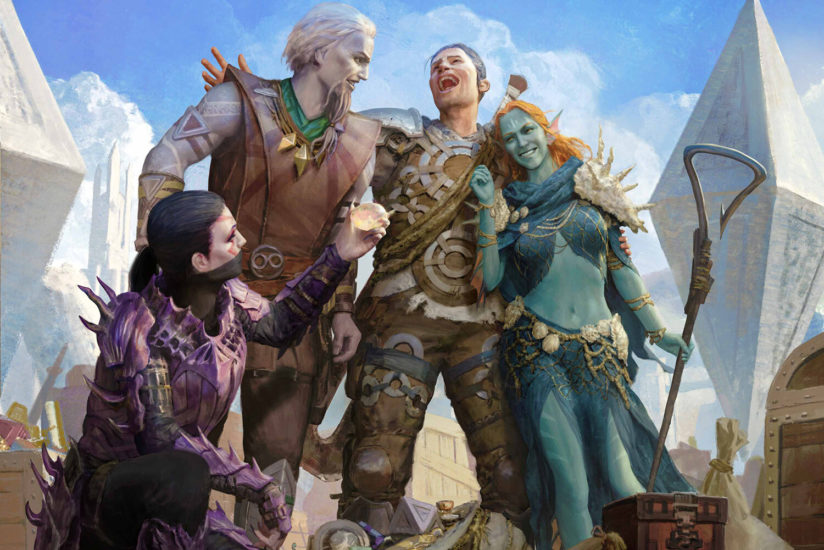 Spoils of Adventure by Zezhou Chen

Last time, I continued my series on powerful subclass options at the 5–8 level range. This week, we’re continuing to levels 9–12. While less impactful than the previous bracket I covered, four levels still make a large difference. Casters have received their 5th- and 6th-level spells, and 11th-level features can make or break a class’s relative viability. A reminder: Even though this list focuses on an individual class and subclass, I will mention relevant multiclassing additions in my analysis.

It’s also important to note that, given how many subclasses there are in 5E, I simply cannot make an exhaustive list of all the strong entries available to players. Many of the entries that were good in one bracket will be good in another, but to avoid repetition I will do my best to highlight different good options unless a recurring option is head and shoulders above the competition.

This level bracket has a similar effect on fighters as the 5–8 range had. The main difference is while every martial class gets an extra attack at level 5, only the fighter gets one at 11. This puts the fighter ahead of most other martial classes, and Eldritch Knight is the best fighter, though the math can be confusing. Before level 11, Eldritch Knight builds actually get more value out of the cantrip + attack combo from War Magic than they do from using Extra Attack. Once the fighter’s third attack comes online, most Eldritch Knights will switch to that.

Another key tool for the Eldritch Knight is the spell Shadowblade. The spell is the best use of a fighter’s concentration, allowing them to deal large amounts of damage while benefiting from a shield. The spell also upcasts well, starting at 2d8 per swing at 2nd level and increasing to 3d8 at 3rd. Pairing this powerful weapon with three attacks leads to high single-target damage with excellent defense to match. No other martial class gets access to this spell or has the number of attacks to take full advantage of it. Fifth place to the spell-slinging swordsperson.

I was pretty hard on the Enchantment subclass when I was reviewing the plethora of wizard options. I stand by those remarks, but that was when I was viewing the subclass holistically. Enchantment grants one very good ability, and it does so in this level bracket.

Split Enchantment allows the wizard to double the effectiveness of any single-target enchantment spell they can cast. Sorcerers normally have to pay a spell’s level in sorcery points for such an effect, but Enchantment wizards can do it for free. Suggestion, Hold Person, and Hold Monster are all made significantly better by adding another target. Thanks to Fizban’s Treasury of Dragons, there’s even a single-target damage-enchantment spell in the form of Raulothim’s Psychic Lance. If you want to feel powerful as an Enchantment wizard, this is the bracket to play in. Fourth place.

Remember when I said the Eldritch Knight was better than most other martial characters? Well, it turns out paladins continue to sit above even the best fighters. Paladins fall solidly into what I describe as a “good stuff” class. No matter what level you’re playing at, the features always range from decent to excellent, so there’s always something to look forward to. At this bracket, paladins are receiving their 3rd-level spell slots and Improved Divine Smite.* While this is good for every subclass, it’s the Oathbreaker that benefits the most.

This is thanks to Oathbreaker being the only subclass to gain the Animate Dead spell. At this level range, the Oathbreaker can control between six and nine skeletons without worrying about them going feral. Each of these skeletons benefits from the damage aura the Oathbreaker has had since 7th level, increasing the already incredibly high damage output of Animate Dead. This subclass, backed up by nine dual-shortsword-wielding skeleton friends, is definitely spooky enough for third place.

But what if you want to show martial characters that casters are better at everything without managing a skeleton horde? Don’t worry, the Swords bard is here to help. Much like the Enchanter, I was not impressed in my overall assessment of the College of Swords, but there is a very specific build that both literally and figuratively takes off at this level.

The Bardcher, one of my most controversial builds,* combines the martial option of Swords with the 10th-level bard feature Magical Secrets. This makes for a very powerful archer who also gets to be a bard, albeit one with lower charisma.

The spells that allow for this are Find Greater Steed and Haste. These two spells have great synergy, as both the bard and their mount benefit from Haste when you cast it. Having a griffon mount to keep your archer out of danger is good; giving both it and yourself double the movement, extra AC, and an additional attack is great. Second place to the winged archer.

I was unhappy giving first place to the Chronurgy wizard in my subclass rankings, and I’m unhappy doing it here, but there is no denying this subclass’s power in the 9–12 level bracket. Enchantment might be able to double some of their spells, but Chronurgy gets to break the game.

The time wizard’s 10th-level feature lets them convert a spell into a form where any creature can cast it using an action. The problem is that the designers didn’t properly limit what spells this could be done with. The biggest exploit enabled by this oversight is the Tiny Hut spell.

Normally, Tiny Hut has a 10-minute casting time and is intended to provide a safe place to sleep. But now it can be summoned instantly and used as an impenetrable defensive position during combat. On top of the defensive strength it provides, the rules allow for objects like arrows to be fired from within the hut without issue, meaning your party’s archers can fire with complete safety.* Even without this exploit,* Arcane Abeyance is incredibly good and pushes Chronurgy into first place.

That wraps up the third part in this series. Tune in next time, where I’ll cover levels 13–16.

Which doesn’t actually improve Divine Smite, but does give an extra d8 of radiant damage on all melee attacks.
People get real mad when a bard wants to do more than buff the party.
“Creatures and objects within the dome when you cast this spell can move through it freely.”
I am 99% certain this wasn’t intended.