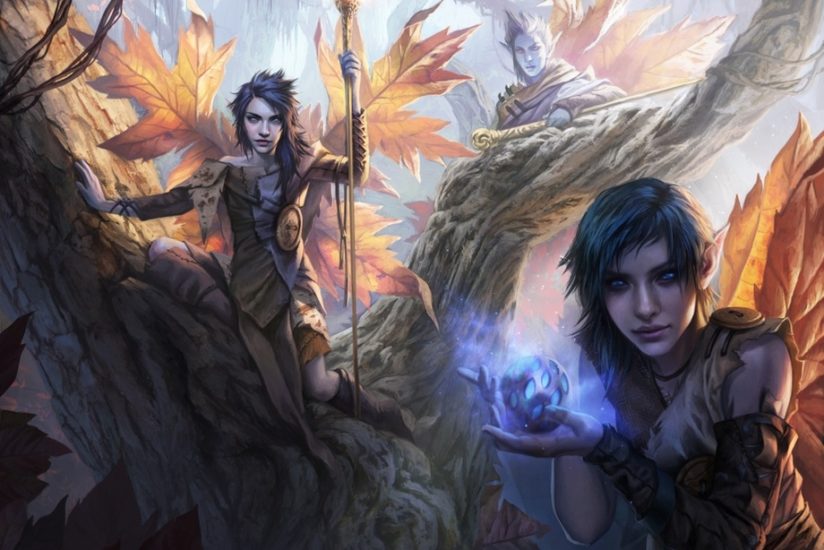 Fae of Wishes by Magali Villeneuve

Last time, I continued my series on powerful subclass options at the 9–12 level range. This week, we’re continuing to levels 13–16. Casters have received their 7th- and 8th-level spells, while most martial options have fallen irreparably behind. A reminder: even though this list focuses on individual classes and subclasses, I will mention relevant multiclassing additions in my analysis.

It’s also important to note that, given how many subclasses there are in 5E, I simply cannot make an exhaustive list of all the strong entries available to players. Many of the entries that were good in one bracket will be good in another, but to avoid repetition I will do my best to highlight different options unless a recurring option is head and shoulders above the competition.

The barbarian might not get much past 5th level, but there is a combo at this level bracket that is equal parts funny and frustrating: the “never say die” strategy. This build begins with the Zealot’s 14th-level feature that prevents the barbarian from dying unless they end their rage at 0 HP, then combines it with the base barbarian 15th-level ability that removes most of rage’s early end conditions.

This results in a character who is almost impossible to kill while raging and almost impossible to knock out of rage early. There are some hard counters to this strategy, such as the Sleep spell putting the Zealot to sleep and ending their rage, but most enemies don’t have these counters.

You still face the problem that a barbarian’s offense is weak enough for enemies to simply ignore you in favor of targets they can actually kill. Anyone looking to make this character should focus as heavily on offense as they can with feats like Polearm Master and Great Weapon Master to punish anyone trying to bypass you. Fifth place to the unkillable barbarian.

The Arcane Trickster made an appearance in an earlier article in this series, but I believe the jump in power the subclass receives in this bracket warrants another look. This increase is due to the ability to cast 3rd-level spells, namely Haste. A question all optimized rogue builds must answer is how to trigger Sneak Attack twice per turn, and Haste is one of the best answers.

This works through the rather unintuitive Ready action. On the rogue’s turn, they make one weapon attack using the action granted by Haste, triggering Sneak Attack. Then they use their normal action to ready an attack as soon as their turn ends. Now they can use their reaction to make an attack during someone else’s turn, triggering Sneak Attack a second time. This strategy can be achieved much earlier with the help of a friendly caster, but now the Arcane Trickster can do it with zero support.

At 14th level, where this strategy comes online, Haste adds an attack and the 7d6 of Sneak Attack. Normally, Haste’s extra attack is worth a 33-50% increase in damage, depending on how many extra attacks the character has. Rogues only get one big attack, so this doubles the character’s damage. Now, the normally low-damage rogue can keep up with or even surpass other martials in single-target damage. Fourth place to the sneaky speedster.

I’m going to take the controversial stance that Wish is a pretty good spell, and Genie warlocks are in the only subclass that can cast it, albeit in a limited form, at this level bracket.

The limitations in question are fourfold:

Sadly, this does remove options like casting Find Greater Steed or wishing for a 25,000 gp gemstone, but there are still plenty of amazing choices.

A quick look at the 247 non-warlock spells made available by this feature shows some solid combat options. Wall of Force, Heal, Globe of Invulnerability, and Disintegrate all fall within the purview of Limited Wish, and that’s just scratching the surface. This feature also offers a plethora of noncombat options. No matter how you feel like using it, this feature is incredibly flexible.

Besides their wishing capabilities, Genies have plenty of lower-level subclass features that are still very good at this level bracket, such as on-command flight. Tie this package together with the three 5th-level spell slots of the base warlock and the ever-reliable Eldritch Blast and you have a very effective character. Third place goes to the warlock with the wishes.

Given the direction these lists have been trending in, I’m sure it’s clear that I consider casters the strongest options at high levels of play. The Stars druid gets all that full-caster power while flying, having nearly unbreakable concentration, and taking half damage from most sources. This suite of powers comes from multiple subclass features, but it’s the damage prevention gained in this bracket that really ties everything together.

By this level bracket, a druid with 16 constitution will have around 115 hit points. Coupled with a generally low AC and no Shield spell, this class is often squishier than a wizard or sorcerer. However, thanks to the Full of Stars feature, the Stars druid gains the physical resistances of a barbarian’s rage while they’re in their starry form.

This damage reduction coupled with the improved concentration saves of Dragon Form means a Stars druid with a +8 constitution save would need to take 38 damage from a single source before there would be a chance of losing concentration. Now you can make sure all those powerful druid concentration spells you cast stick around long enough to be effective. This class’s second place was written in the stars.

As good as the Stars druid is, the Creation bard steals the crown this time. At most levels, this subclass is neat but not particularly strong. It gets a temporary pet that can be used as a flying mount,* but its signature Creation ability is too constrained by the strict gold limit. However, this is the level bracket where that gold limit is lifted.

Now the Creation bard goes from uninspired to very strong. There are far too many ways to use this uncapped Creation feature to list them all here, but one easy combat application is purple worm poison. This weapon coating deals 12d6 damage, and you can create them in batches of five. Use this damage boost yourself or hand them out to your grateful martial companions; either way your party will be doing significantly more damage.

Outside of combat, there are literally thousands of options for how Creation bards can use their feature. Whether you’re trying to convince your GM that skyships are only Huge sized or you’re working as a poison factory, Creation bards get a massive boost of power at this bracket and take first place.

That wraps up the third part in this series. Tune in next time, when I’ll finish with levels 17–20.

I like the idea of a flying armchair.
Jump to Comments