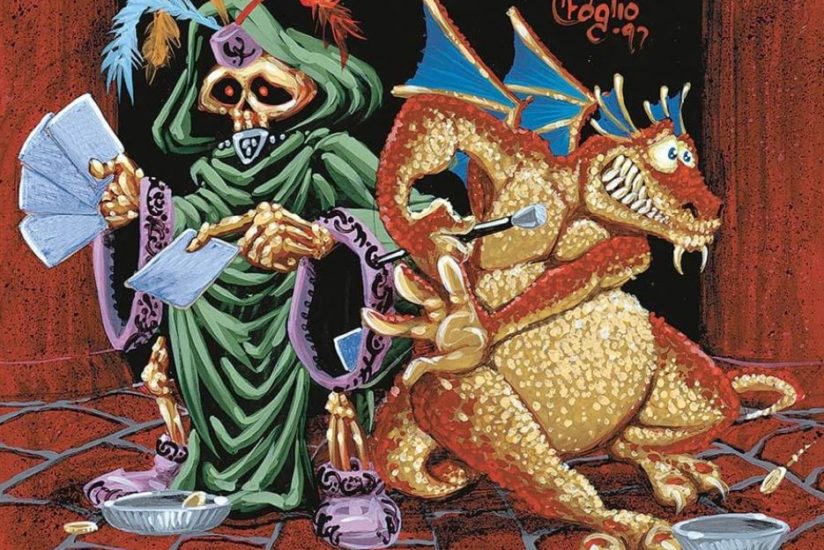 Despite their “optional” status, I consider feats one of the most important parts of Dungeons and Dragons 5th Edition. Many builds, both caster and martial, are defined by their feat choices, and I can’t imagine playing the game without them. Unfortunately, not all feats are created equal. The power difference between the best and worst feats is far larger than anything found when comparing classes. Today I want to cover the low end of this power curve and highlight some of the worst-designed feats found out there. This isn’t necessarily a power ranking, but make no mistake that every feat we’re talking about is very bad.

You have a mind that can track time, direction, and detail with uncanny precision. You gain the following benefits:

Like most entries on this list, Keen Mind belongs to a category of feats known in the community as “half feats.” Half feats include any feat that grants a single ability score increase alongside its other benefits. This does give wiggle room for the feat’s other bonuses to be weaker, but Keen Mind goes way too far into the underpowered side.

Keen Mind is full of “features” that have little to no mechanical impact on the game. There is no benefit in the rules to knowing which way is north or how many hours there are till sunrise. Of course, the GM could translate these into something like advantage on a survival check in certain situations, but such improvisations cannot be relied upon.

The best part of this feat is the recall feature, as it lets you reasonably ask to have information repeated to you by the GM. However, this is still an extrapolated benefit and requires a GM who is rude enough to withhold information simply because the players forget, even if the characters would have remembered. Keen Mind used to have a niche as one of the only intelligence-based half feats, but with the feats from Tasha’s, even that is no longer true.

Skilled at mimicry and dramatics, you gain the following benefits:

From intelligence to charisma, we have Actor. On the bright side, this feat is better than Keen Mind, as it has actual mechanics behind its features. Unfortunately, they are still bad. Both halves of this feat focus around passing yourself off as someone else. While not as useless as knowing which way is north, this feat still has some fundamental problems.

The first of these problems is that the abilities granted by Actor are things most GMs would normally allow anyone to do. If a player told me they wanted to impersonate someone, I wouldn’t demand to know if they had taken Actor; I would call for some number of social checks as they carry out the deception. Someone with Actor would have advantage on those rolls, but that’s very weak for a feat.

The second issue is that someone with Actor still needs to use a spell like Disguise Self or tools like the disguise kit. The feat itself doesn’t help make the character appear like whomever they’re impersonating; it only replicates their voice. There will of course be niche situations where this feat shines, but given the cost involved, feats need to be widely applicable to be useful.

Time spent mastering the culinary arts has paid off, granting you the following benefits:

This is the newest feat on this list, and it has more than earned its place. It’s not very often we have power regression in 5E, but this manages to be an almost strictly worse version of the Inspiring Leader feat from the Player’s Handbook. Both feats grant the party a source of temporary hit points, but Chef gives significantly less. At 4th level, Inspiring Leader hands out 7-8 temporary hit points, whereas Chef gives 2. This difference only gets larger, with each feat granting a max of 25 and 6, respectively.

Chef does grant a couple of other bonuses, but they are barely worth mentioning. Tool proficiencies are some of the weakest features you can receive in 5E, and 1d8 of extra healing during a short rest isn’t much better. The healing could be helpful at very low levels, but at medium and high levels, it’s a rounding error. An average of 4.5 extra hit points doesn’t even make up the difference between Chef and Inspiring Leader.

Alert to the hidden traps and secret doors found in many dungeons, you gain the following benefits:

Given how notoriously bad the Find Traps* spell is, it’s at least in theme that the trap-focused feat is also very bad. This is the first entry that isn’t a half feat, and for the life of me, I don’t know why. Traps are simply not a large enough threat in 5E to dedicate an entire feat to reducing their damage output.

Dungeon Delver doesn’t even cover all the ways a trap can target you. This feat doesn’t make you immune to conditions imposed by traps, and although you have advantage on saving throws, you still take some damage on a successful save. This feat does succeed at making you good against traps,* but that’s not enough.

You have studied languages and codes, gaining the following benefits:

Finally, something worse than Keen Mind. I mentioned that tool proficiencies are some of the weakest features in the game, but languages might be even weaker. Between low-level spells like Comprehend Languages and the languages characters already start with, most parties don’t need much help bypassing any language barrier they run up against.

Additional languages also suffer from a meta perspective. Since 5E is a game, there can’t be any impassable language barriers that would end the adventure. At best, knowing an obscure language will give the party some secondary information they didn’t need in the first place.

Linguist’s other problem is one I mentioned with Actor: it creates a special action that many GMs would normally allow any player to attempt. Despite how much text is dedicated to the cipher feature, it’s just a code that only select people can understand. This isn’t an uncommon method of communication, and you don’t need to be a language savant to create one.

You have practiced extensively with a variety of weapons, gaining the following benefits:

Wrapping up this list we have another feat that does little more than add bad proficiencies. This feat assumed weapons would have a much wider range of abilities than 5E ended up delivering. In a game where a glaive and a pike did different things, more weapon options might be useful, but 5E’s weapons are generally very similar outside of the dice size they use. This means that almost any character who needs to use a weapon will start with or gain a proficiency that fits their need, rendering this feat useless.

For a good example of why this feat is so bad, let’s pretend I’m a wizard who really wants to use a rapier but doesn’t want to be a Bladesinger. The average difference between a dagger’s 1d4 and the rapier’s 1d8 is a grand total of…2. Not only is this damage boost small, but it’s also at its best with bad builds. The only wizard who should care about weapons is the Bladesinger, which gets a free weapon proficiency or has multiclassed into a martial option that would also grant the needed proficiencies. My theoretical wizard shouldn’t be going anywhere near weapons as a useful damage source.

With the current design of 5E, feats are the most expensive features in the game, level wise. The reason so many builds dip 1 level into fighter or cleric is that 1 level of another class is significantly cheaper than the 4-8 levels it would take to replicate the effect via feats.

Given this high cost and their competition with attribute increases, feats need to be extremely powerful to even approach viability. This becomes a problem when players look to take feats like the ones on this list for flavor. If they want the cool story elements, then they have to seriously damage their character’s viability.

I hope that in the next edition of the game, we’ll see feats changed to more easily allow flavor picks instead of pushing players toward the most mechanically powerful options. My personal solution would be to split feats into minor and major categories that are granted at alternating levels. This would solve the problem of Actor trying to compete against Crossbow Expert. I’m not sure what direction the designers will go in, but I look forward to seeing the result.

Doesn’t actually find traps, just tells you that there’s a trap around somewhere.
Most of them, anyway.