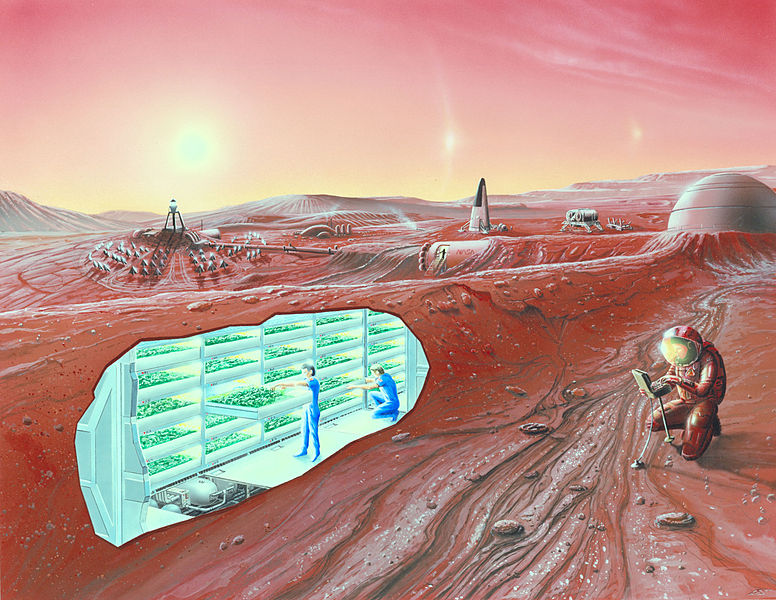 Most planetary evacuation scenarios don’t work for two main reasons. The first is simply that other worlds within our solar system are incredibly hostile to human life. From Luna to Mars to Europa, none of them are even remotely suited for us to live on. In addition to the lack of breathable air, there are fun problems like deadly radiation, extreme temperatures, toxic dust that degrades equipment, and an absence of food. To survive on any of these worlds without support from Earth, humans would need completely self-sufficient environments. And if humans can build those, why not just build them on Earth to survive whatever catastrophe is going on? That would be a lot easier than sending them into space.

The second problem applies to stories with an Earth-like world in another solar system. While such a planet is much easier to live on, how do people get there? If they have faster-than-light (FTL) technology, then they’re capable of producing vast amounts of energy. In that case, solving the Earth’s problems should be child’s play. If colonists reach this distant Eden by slow, generational ships, that means they have perfected the art of self-contained environments, returning us to the first problem.

Fortunately, there are still plausible scenarios for evacuating the planet to avoid disaster. I’ll even share a few of them with you.

For this scenario, your world is not our Earth. In this made-up solar system, two planets orbit within their star’s habitable zone. Both planets have the liquid metal cores necessary to generate a magnetic field, and as such can maintain an atmosphere of nitrogen and oxygen. Both worlds have life, perhaps because an ancient asteroid impact carried hearty bacteria from one to the other in the prehistory of planetary formation.

Only one of these planets has human life, though* – at least at first glance – and that life is in trouble. Civilization is threatened by nuclear war, environmental collapse, or both. The problem is so vast that humanity faces extinction. Their only chance is to send as many people as possible to the sister planet and hope for the best.

This scenario does not require the advanced technology of FTL drives or long-term, self-sustaining environments. In fact, it can be accomplished with the technology of today, or even the 1960s. The biggest obstacle would be the radiation of open space, but increased risk of cancer is a negligible problem if you’re running from the end of the world. The second planet, while not familiar, is much better equipped to support human life than the nuclear wasteland or parched desert that the first planet has become.

Of course, that does not mean life on a new planet is easy. Even if it’s biosphere shares a common ancestor with humans, any number of factors can make life difficult for the new colonists, providing delicious conflict. Alien microbes might cause new diseases, or local mega-fauna could turn out to be less than friendly. Perhaps the geology itself is dangerous, with city-destroying quakes a common occurrence. Whatever the case, you’ve dropped your characters in a dangerous scenario without super advanced technology or anywhere else to go, and that’s a great start to a story.

This scenario works in our very own solar system and is used for films like Interstellar and novels like The Expanse. While humans do not have FTL drives or the ability to put themselves in cryosleep for centuries, they have come into possession of an extra-dimensional gateway. This gateway is almost certainly alien in nature, built by a mysterious intelligence for mysterious reasons. The only thing humans know for certain is that the gate parked relatively close to Earth, and on the other side lies a lush world with breathable air and drinkable water.

The hypergate neatly solves the issue of how to reach another life-supporting world without having the technology that would make it unnecessary to do so in the first place. Travel through the gate is easy, only requiring a spacecraft that can keep humans alive for a few weeks at most.

Once your colonists have landed on this distant world, they will no doubt have to face many of the same difficulties from the previous scenario, keeping your story fueled up with conflict. If you want to up the tension even further, you can have the gate close the moment your characters are through, cutting off all contact with Earth. Not only will your characters be unable to resupply, but they’ll also be left wondering what happened to their friends and loved ones on the dying homeworld.

By using a hypergate, you can keep all the familiarity of the real world while not alienating readers who care about scientific plausibility.  The obvious cost is that you’re also locked into a story about where the hypergate came from in the first place. You might be able to stretch it out for a time, but your readers will want an answer, and they’ll expect it to be more satisfying than whatever is happening at the end of Interstellar.

Very few disasters, natural or artificial, have the capacity to make Earth less habitable than any of our stellar neighbors. But that’s okay, because an active enemy can accomplish what no disaster can. If an evil dictator has come to power in Earth’s most powerful nation, and their goal is to wipe out people of a specific group, the void of space might be an inviting alternative.*

If an evil dictator isn’t your cup of tea, you can swap them out for a gray goo style nanite apocalypse. The important part is that your Earth contains some force that will actively hunt down and destroy any who don’t flee. The best survival habitat in the world won’t be enough if someone is shooting missiles at it. At the same time, the hostile force must be limited to Earth’s atmosphere. Otherwise there’s no point in fleeing to Luna or Mars. For this reason, alien invasions don’t work well.

For this scenario to work, your colonists should have the resources to launch a space expedition but not the resources to defend themselves from whatever threat is bearing down. A small but technologically advanced country is a good option, with all national resources committed to making sure a few escape before the enemy breaks through. You could also use an organization working in secret within the threat itself. I would love to read a story about NASA secretly shuttling refugees to Mars under the guise of launching communication satellites.

In this scenario, your colonists aren’t cut off from Earth, and that only adds to their problems. In addition to surviving the harsh Martian conditions, they live in constant fear that their enemies on the homeworld may find a way to reach them. Imagine a scene where your characters have finally solved some critical problem with their habitat, only to receive an alert about an unknown craft from Earth headed right for them. 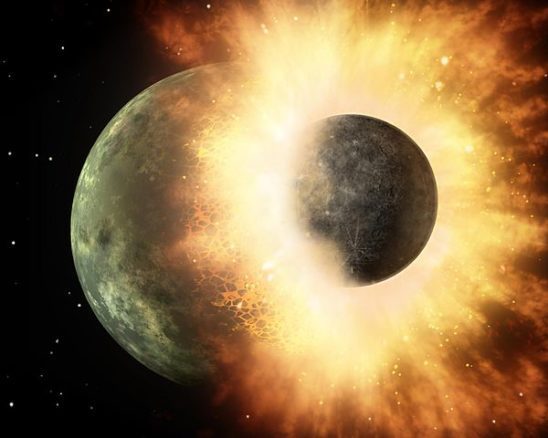 I’ve mentioned how unlikely it is for a disaster to make Earth less habitable than Mars, but now it’s time to talk about the exceptions. It’s certainly possible that some event will make it impossible to live on Earth, but you’ll have to go much further than most authors have been willing to in the past.

Let’s take the classic tale of an asteroid or comet impact. While one of these could certainly wipe out the human race, it would do so by causing widespread ecological collapse. Without a functioning ecosystem, all of humanity could starve and die. But even an ecologically devastated Earth is less hostile to human life than Mars or Luna. If your colonists have the technology to survive on those other worlds, they could survive here. To tip the scales into plausibility, you’ll need an impact far more devastating than the rock that wiped out the dinosaurs.

This hypothetical impact would need to turn Earth’s crust into a magma soup, completely strip away the atmosphere, or both. You want something on the order of the theoretical Theia impact that created Luna. Objects with the speed or mass to create such an impact are incredibly rare, which is why very few scifi stories use them. But our solar system is so vast and mysterious that no one can say for certain what is lurking out there in the dark.

If asteroid impacts aren’t your thing, there’s another option: orbital disruption from a supermassive object. If something with a lot of mass passed close enough to our solar system, it could alter planetary orbits, perhaps sending the Earth careening into the sun, or out of the system entirely. A black hole is the go-to for such an effect because it’s hard to see coming, but a rogue star could do the trick as well.

Whatever the cause, an Earth that’s burned up in the sun or frozen in the void of space will be a lot less habitable than some of our planetary siblings. Prospects for martian colonization might even improve if the red planet is nudged closer to the sun by whatever event devastated the Earth.

Surprise, this last one isn’t about leaving the planet at all, but it has all the same story beats. First, find an isolated and remote land mass on your world. It should be unpopulated and have a punishing environment. Antarctica works if your story is set on our Earth.

The remote continent shares many qualities with other worlds. It’s difficult to reach, there are few if any other humans around, and survival is difficult because of the extreme environment. But critically, humans can still breathe the air and drink the water, meaning survival doesn’t require the kind of super advanced tech that compromises so many planetary evacuation stories.

Remote continents are also a logical point of retreat in the event of an extreme disaster. Antarctica is well insulated from the effects of our favorite apocalypses: global warming will only make it mildly less frigid, and it’s unlikely anyone would waste nukes on a frozen wasteland. It’s the perfect setting for a colony of desperate survivors. Plus, there are penguins.

Notably, a remote continent like Antarctica won’t make much sense if your story includes an asteroid impact. The resulting dust cloud will cool the planet, making an icy wasteland the last place your evacuees would want to set up shop. Even so, this scenario is worth considering if you’re formulating a story of planetary evacuation but the logistics of space travel just don’t add up.

Implausible stories of leaving the Earth stick around because we’re so used to thinking of space exploration as an extension of terrestrial exploration. If nations in the 1700s could set up self-sustaining colonies halfway around the world, surely humanity in the 2100s will be able to do the same on other planets.* It’s difficult to reconcile all the factors that would cause humans to flee this little blue marble, and that’s how implausibility creeps in. But if we do some deep analysis of our stories, we can craft scenarios that are both dramatically interesting and scientifically plausible.

Or whatever you call the sapient species that lives there.
This scenario could hit a little close to home right now.
Hopefully with less oppression and slaughter of native populations.