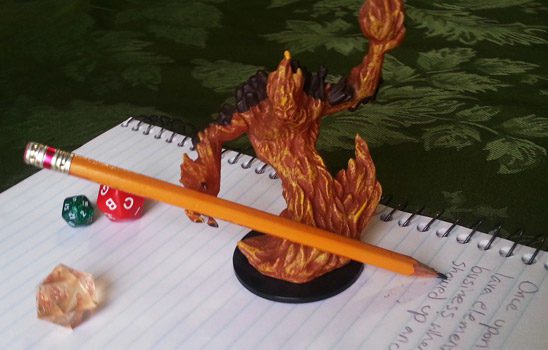 Writing and roleplaying are very different storytelling mediums. Writing is a solitary affair,* with lots of time spent perfecting a piece before any audience sees it. Roleplaying is a collaboration between game master and players, and it is a story told in real time. But despite these differences, writers can learn something from the art of GMing. By studying the restrictions GMs work under, writers may just learn a few lessons that will help with the craft of prose storytelling.

1. Difficult Problems Must Actually Be Difficult 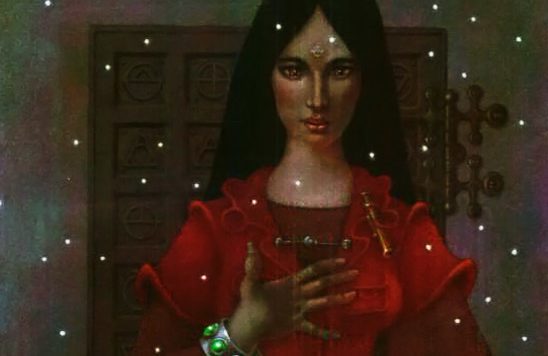 In a prose story, the writer controls how characters react to the problems placed before them. If the writer doesn’t want the problem solved until the climax, then it won’t be solved. Some writers get so reliant on this control they forget to make the problem difficult. They simply decide the characters won’t solve it and move on.

In the novel Lirael, something big is going down at a place called the Red Lake, but the future seers’ sight is blocked, so no one knows what it is. That sounds like a problem until you realize that the characters trying to solve it are the leaders of an entire country. If they want to know what’s going on with the Red Lake, all they have to do is dispatch a battalion of soldiers and find out. Instead, the author has the two protagonists leave on a daring quest just to find out what’s happening at this lake.

This story is incredibly unsatisfying because it feels like there’s no reason for the characters to be enduring hardships when the problem could be so easily solved. In a roleplaying game, this kind of story would never get off the ground because PCs are wily. They’d have asked why the king didn’t just send scouts to find out what was happening at this lake. If they were in positions of power like the characters in Lirael, they’d have dispatched the scouts themselves.

PCs usually approach problems by trying to find the most efficient way to solve them, not by looking for the easiest way to a dramatic conclusion. A GM in this position would have to revise their story so it could work with the PCs’ sensible actions. After making this mistake a few times, most GMs learn how to present problems that are actually difficult to solve. Writers would do well to learn the same lesson. Their characters won’t come off the page and object, but readers certainly will.

2. Keep Helpful NPCs to a Minimum 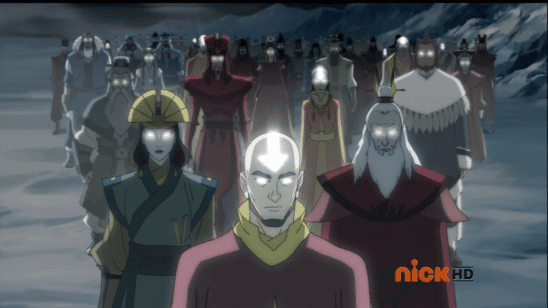 Writers have a bad habit of surrounding their protagonists with more powerful, and often more interesting, side characters. Wise old mentors, powerful generals, badass love interests, the list goes on. I’m not positive why this is such a problem, but I think it probably goes back to Gandalf.

The Legend of Korra has this problem in spades. The protagonists are all teenagers,* but they were accompanied by dozens of capable adults. Whenever a problem would come up, the writers had to scramble to get the grownups out of the way so Korra and her friends could actually be relevant. By the end of season three, the writers had stopped caring and just had the teenagers attack the main bad guy head on while the trained soldiers launched a small diversion.

Needless to say, this comes across as hopelessly contrived, but a lot of writers still do it because they can’t help themselves. They have so many great ideas for characters that they include them all in the story, regardless of the damage done to audience enjoyment.

GMs, on the other hand, can’t get away with that. For one thing, players really don’t like having their characters overshadowed by NPCs. A GM who does this on a regular basis will find themselves the recipient of many complaints, plus an angry look or two. Worse, players will eventually just give up in the face of too much NPC competence and demand to know why the NPCs aren’t out there solving the problem. This line of thinking will literally kill campaigns, as players realize it just isn’t worth their time to show up every week.

3. If Magic and Technology Can Be Abused, They Will Be 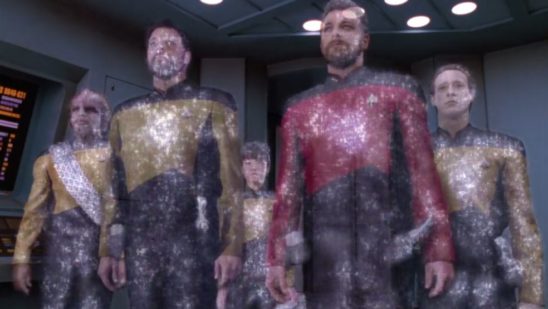 With a little transporter action, you can double your Riker and your fun!

Speculative fiction is absolutely full of magic and technology with applications far beyond the author’s original intent. In Star Trek, replicators and transporters should solve most problems within the first five minutes of an episode. In Harry Potter, time turners and super luck potions should make defeating Old Voldy a walk in the park.

These elements are highly abusable, because writers didn’t fully think through the implication of introducing such powerful tech or magic to their world. Often, a new piece of magic or technology will be added for a single storyline with no thought given to how it will affect the broader narrative. Other times the writer is just going for novelty and doesn’t consider the consequences at all. If the writer doesn’t have a really dedicated editor, no one will call them on it.

But readers will notice, and then they’ll write many, many pages on the internet about how Gandalf should have just taken the One Ring to Mount Doom on the back of a damned eagle. So how are writers supposed to resist the temptation of just adding new shinies into the story whenever the mood strikes?

One surefire way is to run a campaign or two in their setting. It can be difficult for writers to tell ahead of time which of their technologies or magics is abusable, but a party of PCs will figure it out in no time. Not only will the PCs figure out exactly which abilities can be abused to defeat the main bad guy, but they’ll also reveal which magic or technology can be employed to completely change the setting.

If your story takes place in a medieval world but features spells that can summon infinite water, it won’t be long before the PCs have revolutionized farming and saved the land from food insecurity. If your sci-fi story features technology that can upload the human mind, soon your PCs will have created a society in which death has no meaning and people create copies of themselves for company. If you didn’t want that to happen in your story, then it’s a good thing the PCs pointed out the problem so you could fix it.

4. Be Careful With Protagonists From Previous Stories 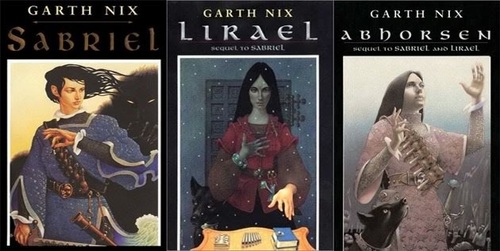 No matter how good they might be, protagonists from one book shouldn’t usually cross over to the next.

Another habit authors have is to bring back the protagonists from their earlier works, just to remind us of the good old days. This is especially common in stories where the new protagonists are children or apprentices of the old ones. It’s not an inherently terrible thing to do, but it’s really easy to get wrong.

Going back to Lirael, we see exactly how wrong. In that book, Prince Sameth is a second-generation protagonist. His parents were protagonists in the previous novel, and they make frequent appearances. The problem is that Sameth’s parents are boring in Lirael. They were cool in their own book, but their dramatic issues have already been resolved. So instead of adding to the plot, they take up space and overshadow Sameth without generating any interesting conflict. They’re also far more powerful than Sameth, leaving us to wonder why they don’t just solve the conflict for him.

While it’s not always a bad idea to bring in protagonists from a previous story, many writers do it far too frequently and for too long. Fortunately, running a few roleplaying campaigns will cure them of that notion right quick.

You see, in most roleplaying games, the previous generation of protagonists will be the current players’ former characters. It’s very difficult for a GM to bring in a player’s old character. For one thing, you can be sure the player will watch like a hawk for any sign that their old character is being treated with disrespect. For another, the GM now has to roleplay that character, which is just awkward. And of course, the other players at the table will get annoyed really quickly if the former PC starts to overshadow them.

Because of the difficulties, GMs will only ever bring in an old PC when it’s really appropriate to the story. That’s a lesson many writers can benefit from.

5. Don’t Twist Your Characters to Suit the Plot 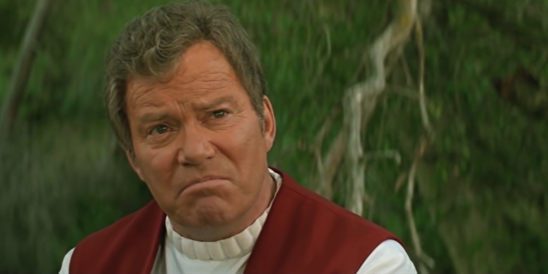 Why would you make Kirk sad like that, writers?

This is one of the most irritating things an author can do: taking a beloved protagonist and making them act completely out of character. And yet, it happens all too frequently. Take Captain Kirk, a well-established character if ever there was one.

In the film Star Trek: Generations, Kirk’s entire motivation is based on the fact that he’s bored after retiring from Starfleet. What he wants more than anything is to make a difference. But later in the film, Kirk decides without explanation that he’d rather just hang out in a simulated reality than go back and save a planet of millions. An entire world is counting on him, and he shrugs. This is so at odds with the Kirk established earlier that I wondered if he would be revealed as an impostor. It’s even worse if you’ve watched the Original Series, because Kirk has been offered the safety of a simulated reality before and always rejected it out of hand.

When protagonists act out of character, it destroys audience investment in the story. Why should readers care about any character if there’s no consistency? But writers sometimes do it anyway, because it can be easier than making big changes to the plot. The writers of Generations needed to have conflict about leaving the artificial reality, and it was easier to have Kirk resist than find a reason that actually made sense.

Roleplaying games have built-in protection against forcing a PC to act out of character: the player won’t let it happen. If a GM crafts a story where the only way forward is to kill a bunch of vampires but the PC involved has been well established to love vampires, it’s a serious problem. The GM doesn’t have the option of just deciding that this time the character should be okay with killing vampires.

As GMs gain experience, they develop instincts about what their PCs will and won’t do. These instincts are valuable for writers too, as they will prevent any temptation to solve a narrative impasse by making the protagonist act out of character. Of course, the fastest way to develop these instincts is to pick up some dice and run a campaign.

Writers and GMs deal with very different restrictions on their storytelling. While restrictions are often thought of as bad, in many cases they lead to greater creativity; hence the lessons writers can learn from roleplaying games. Running games won’t teach you how to write, but it will give you a few valuable habits for when you’re putting words to page. And as writing exercises go, there are worse ways to spend an evening than entertaining your friends with thrilling tales of adventure.

Editors notwithstanding.
Until season four anyway, when they solved the problem by making the teens into adults through a time jump.