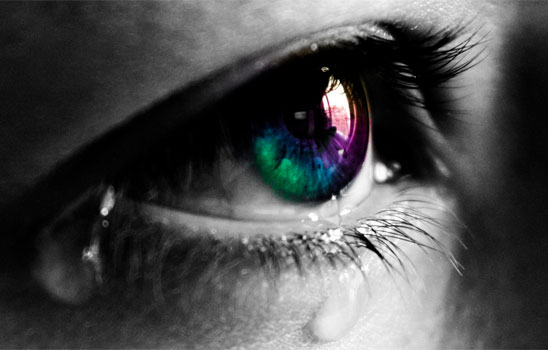 Image by Axel Naud used under CC BY 2.0

Unfortunate events can cling to us like shadows. By inking in these shadows, storytellers can shine light into the deep recesses of their characters and offer hope to the audience. A tale with a haunting past opens a window to renewal.

Every day we have a goal, whether we know it or not. At any time, we might fall short at it, disappointing ourselves and others. A smooth slide may turn into ragged rapids once we rely on its ease of use; a challenge we’ve prepared for may go awry because we misread the directions. Some failures pour off our backs and swirl down the drain, forgotten. Others persist, blaring an alarm we cannot silence. How could you mess up something so simple? How could you neglect something so important? Why were you so careless, so arrogant? You’re just not good enough and you never will be. Your loved ones will never look up to you again.

The moment celestial energy began bursting and swirling around her, Nyala’s future crystallized. She would be the shield of the lambs, bane of the wolves. So she sketched and stitched for years, perfecting her costume. She slept only to gain strength for her tireless training, honing her technique to a sharp edge. Finally the day came; her new identity fit snugly around her, the sirens begged for her help. The villain laughed, but not after she smashed him into several cars and a store front. Then thunder roared overhead, and heroes she had only dreamed of meeting descended from the sky. They scolded her for damaging property and harming the villain. The next day, the lawsuits began arriving. She put her costume in a box under her bed, where it still collects dust.

A hero haunted by failure must face their shame and conquer it. Their moment will come when they must deal with a similar challenge. They might succeed with the wisdom they gained from their failure, or they might learn that they never needed to climb such a mountain to begin with, that calling for assistance or turning away is the better path.

Every moment flows away, never to return. We may not realize its fleeting power until it’s too late. Or perhaps we recognize a critical decision, but our way is blocked by fear, doubt, and obligation. So the moment leaves us to stare at its locked door, forever imagining our lives on the other side. Perhaps if we’d spoken to that beauty, they’d be the love of our life. Perhaps if we’d taken that job, we’d be rich and famous. Perhaps if we’d changed our ways, we’d be free, not sinking into the mire of catastrophes we made.

When the galactic gateway began to close, Marshall panicked. The last year of elegant galas and loving company had flown by, leaving him unprepared for the choice before him: to stay in his new life for two decades or to flee home. His life was beautiful but too new and uncertain, so he gave a teary hug to his love and left. When the gate finally opened again, Marshall received an image with the face of his daughter, nineteen years old. Again and again his moment of departure played in his head, and each time something different delayed him. He sketched himself in her childhood pictures and imagined being part of the audience during school performances. If only he could take back the last twenty years, their lives would be complete.

The character mourning lost opportunity must realize that what they lost is not as sweet as they imagine, and their current life is not so meager. An alternate life haunts their mind because they haven’t found fulfillment in their real one. They need a reminder of the good things they have, a revelation that their opportunity wasn’t as bright as they thought, or a hope for a better future.

Our time is a dance with many partners. We hope our partners will glide with us smoothly, but inevitably a few – whether from pain, ignorance, or malice – will wound us. Even after we leave them and choose another, blood stains our footprints. As we struggle to continue our steps, we are forced to watch as our betrayer picks a new partner. We yearn to speak against them, but it would only turn the crowd against us. We imagine how we might lock them away, strike out at them, inflict the pain they put us through. Instead we look on as they twirl away the night.

When Lee’s parents sent him to magic school, the schoolmaster promised to make him powerful. She kept this promise by regimenting every minute of every hour. If he stole away for a moment of freedom, she’d reward him with lashings and isolation. If he under-performed at exercises, she’d give him heavier loads and reduced meals. She told him that every strike was his fault for not being loyal enough, practicing hard enough, listening to her enough. She told him that he was worthless and should be grateful that she was bothering with him. After years, he almost believed her. Finally he graduated, but his old schoolmaster was promoted to Secretary of Magic, awarded and honored. Unless he wanted to work under her authority, he had to cease magic or flee.

Heroes who’ve been victimized have many paths to recovery. They may feel empowered by speaking out even though doing so can come with grave consequences. They may take pride in being loving, confident, and successful in defiance of what was done to them. When possible, bringing a perpetrator to justice may help release them from their past.

The loss of loved ones pains us like a wound, but a sharp, clean wound will gradually mend, freeing us to seek fulfillment. Tragically, not all wounds are clean. What if we were so demanding that we drove them to illness? What if we did not properly care for them during their days of decline? What if we struck out with harsh words before they were unexpectedly erased from our life? Our thoughts accuse us of causing their suffering. We are abandoned, begging for forgiveness the departed can no longer grant.

Whenever Greta’s husband pushed back testing the new warp engine, she pulled it forward again. If they could just verify its capability, they could unveil the device at the world expo, standing in spotlight before the greatest innovators of their time. After she whined and wheedled, he agreed. They strapped themselves to their seats and activated the new engine core. But just as the stars blurred around them, the engine stuttered. Heat seared their backs, metal screeched around them, and the ship spiraled out of control. When their rescuers pried open the hatch, he was already gone. After attending to his affairs, she fled to an island of strangers, so no one could remind her of what she’d done. She worked fixing assembly-line machines; she didn’t deserve more.

The protagonist who feels responsibility for the death of another doesn’t really need the deceased to forgive them; they need self-forgiveness. That may be as simple as admitting the self-blame they’ve engaged in or as elaborate as an epic quest to save as many lives as they destroyed.

Countless people before us have bled for freedom and self-determination. But when it matters most, we can be relegated to a mere observer in our own lives, horrified at the pain and misfortune heaped upon us. When we lack the power to improve our lot, we may flee to isolation or addiction. Even when our lives improve, in our minds we may still be trapped. We never have enough control, others take advantage of us, safety hovers just out of reach, moving away with every step we make in pursuit.

Jade was young when she and the other halflings were bound in nets and hauled to the mines without food and water. Shackled in endless chains, they were dragged into jagged tunnels. Year after year the blackness of the mountain suffocated them. They listened to its every grumble, frightened of a sudden collapse. Those that fell to exhaustion were taken to a place the others couldn’t see, but the cries echoed through the rocks. After being liberated by the orcs, Jade started her own business and did well. But no matter how much she hoarded, she feared starving in a harsh winter. No matter how secure her home, she was sure someone would shatter her gates and carry her away. How dare the council tax her to build roads and bridges? How dare the priests ask her to distribute food to those living on the streets for mere days? She never had enough.

The character who still feels helpless needs to emotionally recognize the power they already have. If they could see themselves from another’s eyes, they might know that they can control their own fate. They might get relief from protecting others, facing and defeating great challenges, or making an important decision that changes the world for the better.

We cannot change the past, but maybe we can forgive it. We can find enough light in today to banish the shadows of yesterday. Once the shadow fades away, it’s time for a happy ending.