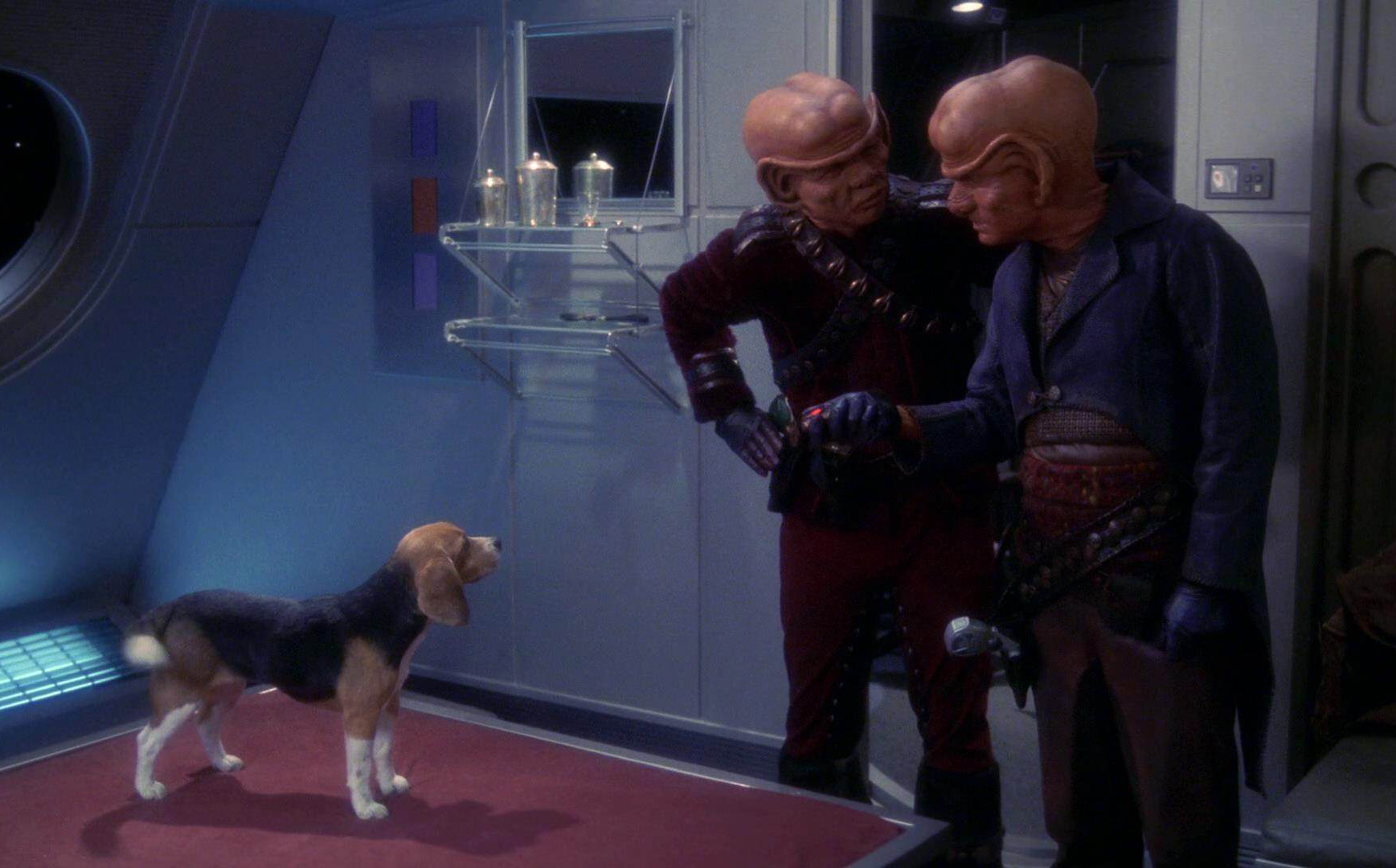 The Ferengi are really wondering why Archer has a dog on this ship.

Animal companions come in all shapes and sizes, but they do share similar characteristics. First, they’re all animals of some kind, though not always animals we’d recognize. Second, they exist primarily to support another character and rarely have an arc of their own. Third, they rarely talk. So while Momo from the Last Airbender is an animal companion, the cat from Hocus Pocus is not. That cat is his own character* with his own arc.

While animal companions are often loved for being cute, funny, or heartrending, they can also get irritating fast. If not irritating, animal companions can be superfluous or sometimes even steal the spotlight all for themselves. Take heed of these failed companions so that your own furry friends may fair better. 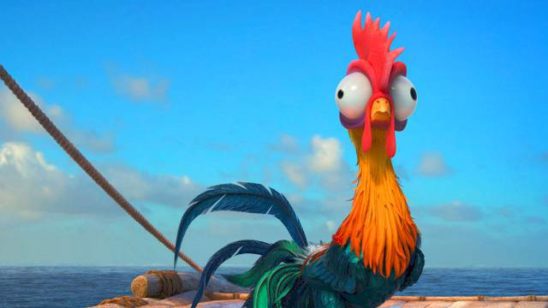 Moana is an excellent film, and you should see it. It has beautiful songs, an empowering protagonist, and a wonderful depiction of Polynesian culture. Unfortunately, it has one glaring weak spot: this damned chicken.

Heihei is incredibly stupid. So stupid he eats rocks and has no desire for survival. That’s his entire character, such as he has one. Most of his scenes involve him getting into trouble and the titular Moana risking her own life to save him. This gets so bad that it’s easy to imagine him as a weight around Moana’s neck.

When a character exists just to cause problems for other characters, that character will get annoying. Moana has better things to do than waste her time keeping this self-destructive animal alive. It’s not even clear why she bothers. The two aren’t particularly affectionate, nor does Heihei have any special meaning to her that’s ever revealed. We know Moana isn’t a vegetarian; she should probably pop Heihei in the stew pot and be done with it.

Heihei’s antics are supposed to be funny, but instead they’re just irritating. To make matters worse, the film is already full to the brim with comedy that actually serves the story. There’s no reason to have a chicken whose main gimmick is eating rocks. 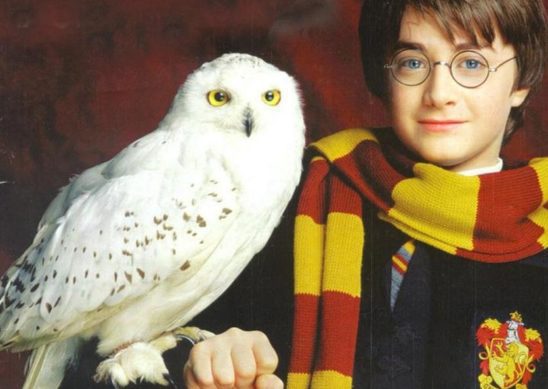 Unlike the previous entry, Hedwig isn’t annoying. In fact, she isn’t much of anything. Here’s an exercise: what character traits would you apply to Hedwig as she appears in the Harry Potter novels?

Despite being Harry’s companion for six years, Hedwig has no personality to speak of. This is odd because both Hermione and Ron also have animal companions, at least for a while, and those critters clearly have personality. Scabbers the rat is lazy and sleeps a lot, but he has a well-hidden loyalty for Ron, even coming to Ron’s defense during a fight on the Hogwart’s Express.* Crookshanks the cat is foul-tempered and vicious but is also excellent at sniffing out deceit.

By contrast, Hedwig’s most important trait is her ability to deliver the mail on time. If she were removed, and her job taken up by one of the school owls, the story would barely need to change. Harry certainly has some affection for her, but she has no personality with which to return it.

Hedwig’s blandness is even evidenced in her death. In the Deathly Hallows novel, she’s hit by a stray killing curse while still in her cage, and afterwards she’s barely thought of again. That’s hardly an appropriate ending for a companion that’s been with Harry for six years. That’s why in the film, she gets to defend Harry from a Deatheater before her death. 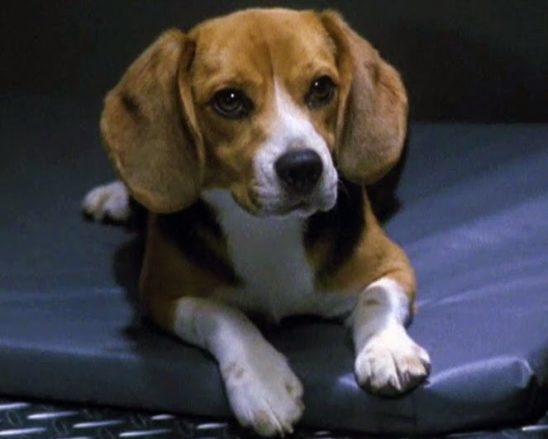 Animal companions aren’t as common in the live-action medium as they are in animation and prose, because real animals aren’t known to take stage direction very well, but Porthos definitely fits the bill as a companion to Captain Archer. Archer talks to his dog more than he talks to his helmsman, and the two have numerous scenes together in what’s clearly an attempt to humanize Archer.*

Porthos’s problem is that while he’s adorable, he doesn’t fit with the story. For one thing, he’s a dog, and the Enterprise is a small ship with very little open space. What was Archer thinking, bringing his dog into that kind of environment? The only time Porthos can get real exercise is when the ship stops at an alien planet, which is incredibly dangerous. On the Next Generation, he could at least go down to the holodeck, but this Enterprise lacks that technology. Factor in all the times the Enterprise is shot at, boarded, or suffused with radiation that makes people insane,* and it’s a miracle Porthos survives.

Speaking of which, Archer is so obsessed with his dog’s well-being that he’ll risk the entire ship over it. In one episode, Porthos gets sick after going down to an alien planet, and Archer is so angry about it that he threatens violence on the peaceful aliens who live there. That’s right – Earth’s first war in the Star Trek universe was nearly over Archer’s dog.

Combined with how much friendlier Archer is with Porthos than almost anyone else, it feels like he cares more about his dog than his ship. In a smaller-scale story, a character whose primary motivation is to protect their pet could work, but Archer is the captain in a space opera. He has bigger responsibilities. Compare Porthos to Spot, Data’s cat from TNG. The episodes in which Spot prominently featured used him to reveal something about Data’s character. The only thing Porthos shows us about Archer is that he isn’t fit to command.

4. Naga and Pabu, Avatar: The Legend of Korra 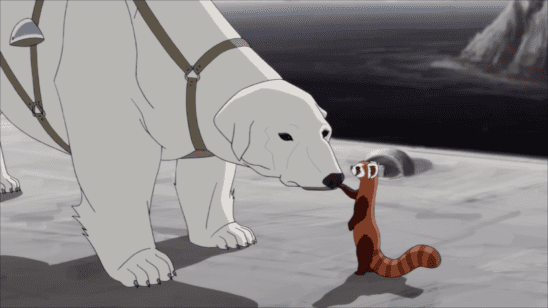 You see, Avatar: The Last Airbender also had two animal companions, one large and powerful, the other small and quick. These are Appa the air bison and Momo the flying lemur. Both have a clear purpose. Appa provides transportation and occasionally backup during fight scenes, and Momo is useful for a number of odd jobs, plus he often gives a lone protagonist someone to talk to. Both have clear personalities as well. Appa is stoic and serious, while Momo is flighty and passionate.

Naga and Pabu are clearly meant to fill the same niche, but they fail at it. While Naga is technically a mount for Korra, she pales in comparison to Appa because she can’t fly, and she can only carry one or two extra people. Plus, Legend of Korra takes place in a world with cars, motorcycles, airships, and planes. There’s little need for a polar bear dog to carry people around. And while Momo interacted with all of Team Avatar, Pabu interacts almost entirely with his owner and is limited to the occasional moment of looking cute or comical.

Since neither Naga or Pabu have much screen time, they have no opportunity to develop a personality. This becomes a feedback loop, because when they do show up, they feel like wastes of time because they have no personality to invest in. Even so, the writers still occasionally try to use them as if they were Appa and Momo. In one episode near the end of season one, Naga somehow breaks into a prison to rescue Korra, and it’s never explained how she got past the guards or how she broke through the metal cell doors. Appa of course could have simply flown in, and for a six-ton bison, metal would have been no problem. If the writers wanted Naga to act like an air bison, they should have made her one.

The very best (worst) I save for last. From the high-fantasy Old Kingdom series, the Dog is an odd entry because she talks and clearly has human-level intelligence. That said, the story keeps telling us that the Dog is completely devoted to serving the protagonist, Lirael, and the Dog clearly doesn’t have an arc of her own, so I think she’s fair game.

The Dog is a complete disaster. For one thing, she’s overpowered. She’s nearly immune to physical damage, has a magical bark that controls people’s minds, and can counter nearly any spell thrown at her. More than one exciting scene is ruined by the Dog swooping in and easily solving the protagonist’s problems for her.

Even more grating, the Dog has full knowledge of the plot because of her magical powers, but she refuses to share that knowledge with the protagonist she supposedly serves. The Dog’s excuses for not sharing information grow increasingly flimsy as the plot moves forward, ranging from “I don’t want to scare you” to “knowing won’t do you any good.” If the Dog were meant to be sinister this might work, but she’s clearly on Team Good.

Finally, the Dog often tells Lirael and the other characters what to do, despite supposedly being at Lirael’s command. Being ordered around for their own good by an overpowered, all-knowing Dog is a major loss of agency for the other characters. That would be irritating enough on its own, but the Dog’s decisions are nonsensical more often than not. At one point late in the story, Lirael has the opportunity to use her magic to figure out how to defeat the big antagonist, but the Dog tells her to wait. There’s no reason in the story for her to wait. The author clearly wanted Lirael to use her powers in the climax, and the climax hadn’t arrived yet.

Over and over again, the Dog serves as the author’s tool to force the plot back where the author wants it, even if the events of the story no longer supports that plot. If the author doesn’t want the protagonists confronting the villain before an important Mcguffin has arrived, the Dog will tell them not to, even if confronting the villain makes the most sense. Short of an author self-insert, there could not be a more obvious contrivance.

Animal companions are tricky because there are so many ways to get them wrong. Think hard about whether your story needs one at all, because there’s a lot of risk involved in these furry friends. If you do decide that your work won’t be complete without at least one adorable critter, they should strike the right balance of usefulness and personality.

Technically a human turned into a cat.
Which is really weird in hindsight, after the rat’s true identity is revealed.
Archer is way too racist for it to work, but Porthos is trying.
Yes, that happened once.