Quick, we need to escape before people realize we're not a good couple!

Romance is a difficult genre to write in. Audiences are very particular when it comes to romance, and it’s easy to fall afoul of their expectations. To make sure your story avoids this unenviable fate, beware of these common mistakes.

Spoilers for: The Forest of Hands and Teeth, Fantastic Beasts, The Long Way to a Small Angry Planet, Harry Potter and the Cursed Child, and Revenge of the Sith. Romances should feel intense, so it’s important for authors to use strong language to describe them. Words like “burning” and “powerful” are common, along with phrases like “head over heels” and “filled with desire.” That’s fine, except when it’s used over and over again.

In The Forest of Hands and Teeth,* protagonist Mary falls hard for Travis, her childhood crush. The author pulls out all the stops, devoting considerable page time to telling us just how in love Mary is. Since love is a powerful emotion, a little of this is fine, but as the story continues, the telling doesn’t let up, and it becomes annoying. Whole chapters go by where a sentence can’t pass without reminding us that Mary is in all-consuming love.

When a story overtells a romance, the viewpoint character comes off as obsessed or stalker-ish. It seems like they have no other thoughts in their head except those of their beloved, which isn’t healthy. It’s particularly jarring in stories where the characters have some other pressing concern. Most spec-fic romances include an external threat that should occupy the characters’ thoughts. The Forest of Hands and Teeth has the constant threat of being eaten by zombies, yet that’s a distant second in Mary’s mind.

If audiences don’t write the character off as a stalker, an overabundance of telling can also destroy belief that the love is real. It feels like the author is trying too hard to convince the audience, like a sales rep talking up the selling points of a “gently used” car.

In order for a romance to feel genuine, it must be shown as well as told. “Show, don’t tell” is a well known saying, but showing is often more difficult, so inexperienced authors still resort to overtelling, especially in romance. That leaves the romance feeling unhealthy at best and insincere at worst. 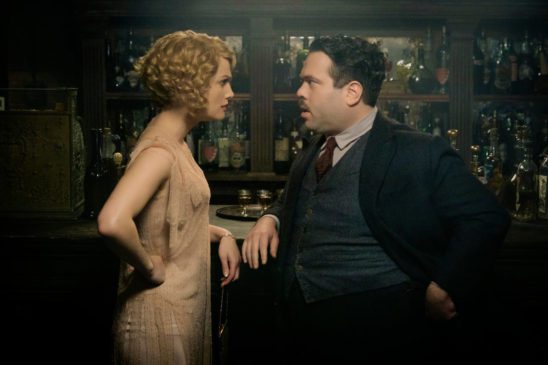 Romances start with some kind of attraction. This attraction is sometimes physical, with characters admiring each other’s hot bods. Attraction can also come from a shared joke, enjoying an activity together, or the adrenaline of barely escaping danger. Any of these are valid options, but just like in real life, if there isn’t more to the relationship, it will be shallow indeed.

Both of the couples in Fantastic Beasts and Where to Find Them fall victim to this mistake. Jacob initially likes Queenie because Queenie is hot. Queenie likes Jacob because… actually I’m not sure why. Maybe because he’s a baker and she also likes baking? Newt and Tina, the film’s other couple, are drawn together by shared danger. The film gets both romances started early, and then it doesn’t develop them any further.

Attraction opens a romantic door, but after that a story has to build a relationship. The audience must see how the lovebirds complement each other, how they’re better together than apart. Otherwise the romance is just a passing infatuation, and there’s no reason for the audience to care if the lovebirds stick together.

Fantastic Beasts clearly wants its romances to be impactful because it uses them as resolution for the closing scenes. The audience is assured that Queenie and Jacob will be together despite Jacob’s being memory wiped,* while Newt and Tina finally admit they have feelings for each other. But these scenes are hollow at best since the film has never given any reason the audience should care about the relationships. 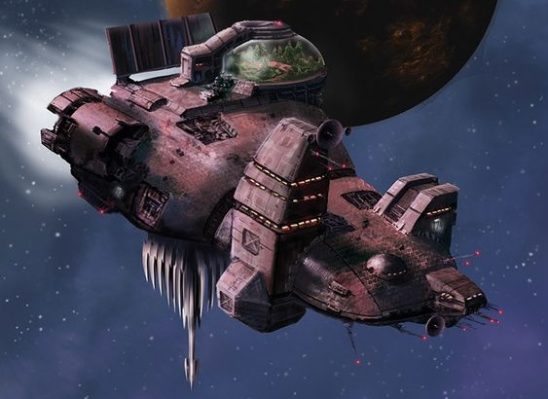 A good romance doesn’t just pop into existence. First, there’s the initial attraction, and then the characters get to know each other and sparks fly. Then the story engages in a little “will they or won’t they” until the audience is begging for a passionate resolution. Or two characters could just start dating out of the blue, with little or no prior indication that they were into each other.

What, that doesn’t sound like as much fun? Because that’s exactly what happens in The Long Way to a Small Angry Planet. Near the end of the book, Rosemary, ship’s clerk, shows up at the pilot Sissix’s quarters, armed with wine and a sexy outfit. Rosemary then goes on to talk about how she’s been attracted to Sissix for some time now, but she hasn’t had the courage to say anything, and that she’s confident they can make it work despite the difficulty of interspecies romance.*

That would be touching, except that Rosemary has never shown any attraction for Sissix. They’d been on the ship together for weeks, so the author had plenty of opportunities, but there was nothing. Or at least, any indications the author did include were too small to pick up on.

When a romance springs forth without any buildup, it leaves the audience wondering if they missed something. Surely there would have been earlier hints of such an important plot development. This is especially true in stories like Angry Planet, where the characters make a point of how they’ve been attracted to each other for a long time.

It’s bad enough to confuse the audience. Worse, a romance without buildup has no satisfaction. When characters confess their love, the audience should be thrilled. With Rosemary and Sissix, the reaction is more likely to be ambivalence. The audience had no idea such a relationship was in the works, so they aren’t invested in its outcome. 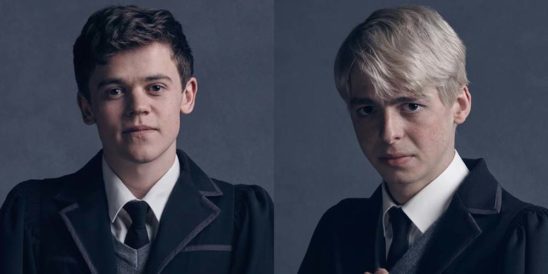 Picture the scene: a woman and man are pressed close together on a crowded train. They stare deep into each other’s eyes. Their heartbeats quicken and color rushes to their cheeks. This is obviously romantic buildup, and most storytellers will recognize it as such. But make the scene about two men, two women, or two people of neither gender and suddenly storytellers aren’t so sure, even though audiences are getting the same message.

In Harry Potter and The Cursed Child, it could not be more clear that the two main characters are falling in love. Albus and Scorpius have a chemistry easily recognizable to romance fans. They constantly want to be in each other’s presence, even when they aren’t doing anything. They find excuses to be together, even when their parents forbid it. They literally blush when the other pays them attention. And yet, there is no kiss, no declaration of their feelings. The play* ends as if there was never any romance to conclude.

When done on purpose, this is called queer-baiting: intentionally stringing a queer audience along with promises the storyteller has no intention to deliver on. But today we’ll give storytellers the benefit of the doubt and assume it’s an innocent mistake. The consequences are the same, but a mistake can be rectified.

When queer implications are ignored, it’s the same as any time a story doesn’t follow up on its foreshadowing: irritation from the audience. When a story foreshadows something, the audience rightfully expects that thing to happen. When it doesn’t, they feel cheated. They stuck through the whole story, waiting for a payoff that never came. The irritation is worsened because queer audiences rarely get to see themselves represented in fictional romances, so their disappointment is felt more keenly.

The best way to avoid this problem is for storytellers to include queer romances, especially between main characters. If that’s the direction the story is going, the storyteller should explore it and see what happens. If there’s absolutely no room for a romance, then storytellers need to be mindful of the messages they’re sending. If the interaction would feel romantic between two straight characters of opposite gender, it will probably read the same way even if the genders change.

5. Building a Society That Hates Love 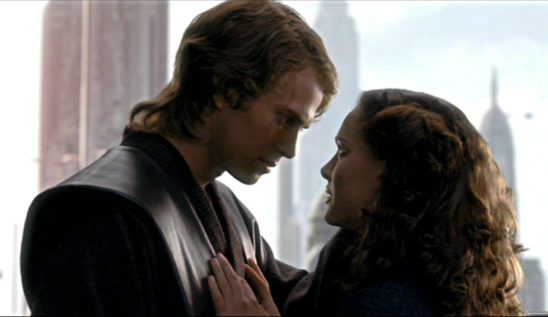 Many great love stories feature some societal obstacle that keeps the lovebirds from getting together. This trope is wildly popular, which is why Romeo and Juliet keeps getting remade. A social obstacle gives the lovers something to fight against before their love can triumph. It’s a great way to provide conflict while avoiding the creepy trope of one character overcoming another’s resistance.

But it’s easy to take this trope too far and create a world where only the protagonists know what love is. Nowhere is this better illustrated than the Star Wars prequels. Anakin and Padme are in love, but they can’t be together because the Jedi Order literally forbids love. Why they do this is unclear. In real life, religious institutions often require oaths of celibacy, but there’s no indication that the Jedi have the sort of belief system that would necessitate such an oath.

Instead, the implication is that the Jedi hate love specifically. And since the Jedi represent the good side of the Force, their edict has supernatural backing. This is incredibly silly to say the least. Obi-Wan can kill Darth Maul in a fit of rage, no problem. But Anakin is forbidden from being with Padme? This casts the Jedi not as the guardians of peace and justice, but as an organization dedicated to stamping out joy whenever they find it. That would be cartoonish even for villains, and the Jedi are supposed to be the good guys.

Most obviously, this mistake will damage a story’s setting. It’s hard to take love-police seriously, no matter how many laser swords they have. Even worse, a society that hates love can make the story’s romance feel self-absorbed, as if the storyteller is saying that only their characters are capable of this beautiful thing. Everyone else is presumably living a half-existence in their loveless wasteland.

The desire for love is not universal, but it is very common. Chances are whoever is keeping the lovebirds apart will also have experienced love at some point in their lives, so they won’t be against it as a concept. Instead, characters should be kept apart for specific reasons. Political obstacles are easy to fabricate, with lovebirds hailing from two feuding families.* It’s also possible to have a world where certain kinds of love are considered wrong, though storytellers should be careful with this one so they don’t disrespect people who face such oppression in real life.

Storytellers have many options for why their lovebirds must fight to be together, but if it feels like the other characters have declared war on happiness, something is wrong.

Romance is a difficult genre even when storytellers don’t make any mistakes. Audiences often have their own specific ideas of what love is, and it’s impossible to satisfy everyone. That’s why it’s so important to avoid mistakes: you’ll have a hard enough time even if you do everything right!

Awesome title for a terrible book.
Nevermind why they let him get memory wiped in the first place.
Sissix being an Aandrisk and all.
Because someone thought it was a good idea to make this story a play.
There I go, remaking Romeo and Juliet again.