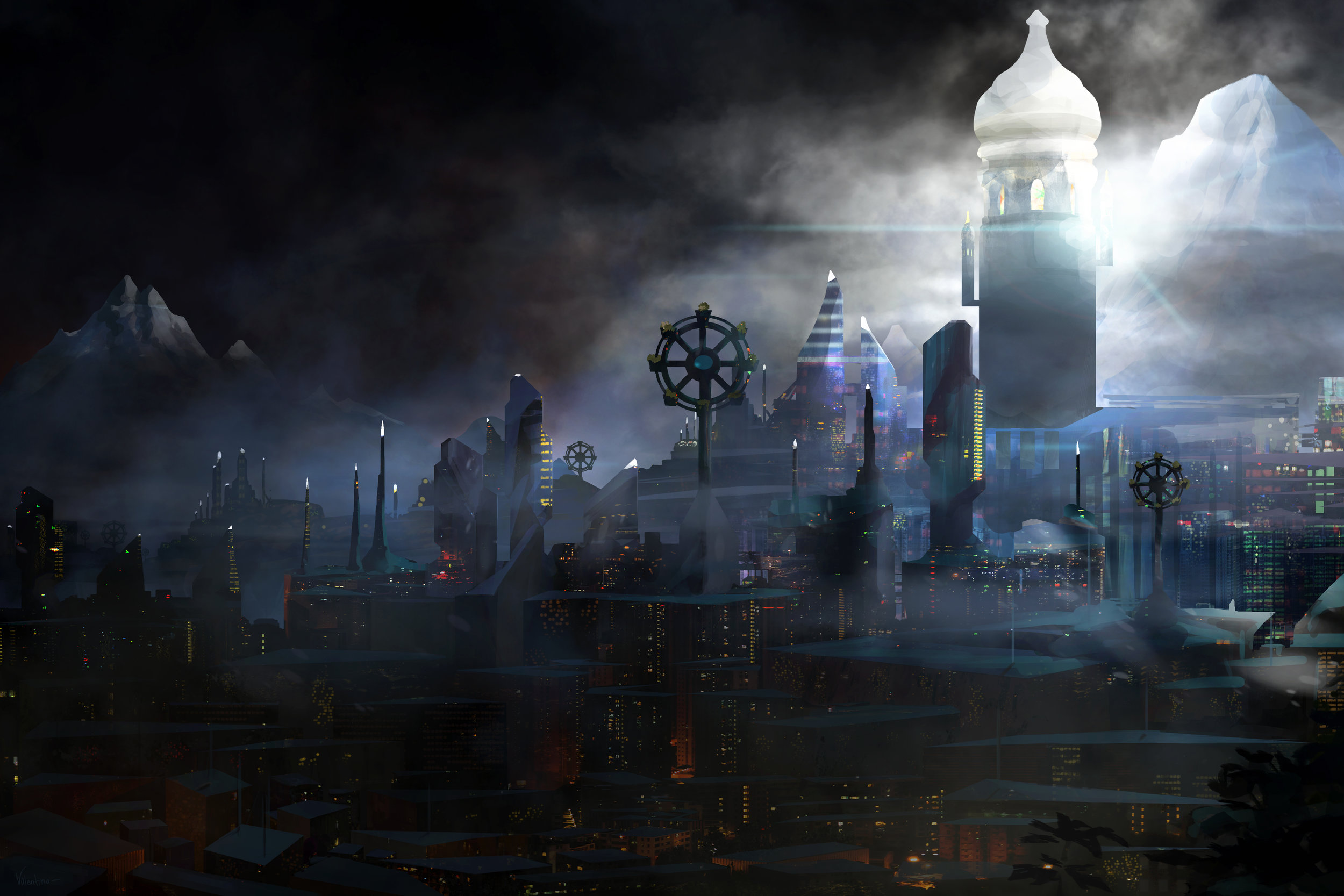 Charlie Jane Anders's The City in the Middle of the Night is filled with metaphors that vary wildly.

Metaphors are strongly associated with beautiful prose, so many writers work to include them in their narration. However, not all metaphors are equal. Bad metaphors can detract from prose as much as good metaphors can enhance it. Let’s go over what you should avoid when adding one.

Metaphors aren’t just pretty-sounding words. Like any other part of the narration, they should communicate something to readers. Unfortunately, some writers work so hard to make their metaphors interesting and creative that they sound like gobbledygook.

The Hugo-nominated novel The City in the Middle of the Night, by Charlie Jane Anders, has lots of metaphors, so it’s a great source of examples. In this excerpt, the first-person narrator, Sophie, describes her skin color with a metaphor.

Our skins, hers cloud-pale and mine the same shade as wild strawflowers, almost touch.

While “cloud-pale” makes sense, strawflowers come in a variety of bright colors, including white, yellow, magenta, and red. None of these seem like skin tones. A reader who’s unfamiliar with strawflowers might guess her skin is the color of straw, but then the “flower” part is unnecessarily confusing. It’s hard to say what Anders means here.

Let’s look at another example from the same book. Sophie says this about seeing her crush dressed up for a nice party.

She stands in the doorway, the silhouette of an upward-pointing knife, and smiles back at me.

What does Anders want readers to get out of this image? An upward-pointing knife would have a pointy tip, right? This woman doesn’t have a pointy head, does she?

As a positive example, let’s look at an excerpt from Christopher Paolini’s Eragon. I know, I’m actually praising Eragon. Paolini’s writing has many weaknesses, but he does well with metaphors.

Grimly he burned one section after another until there was a ring of fire, a half-league across, around the ambush site. The flames looked like a molten crown resting on the forest.

In this example, the metaphor gives readers a flavorful visual for what’s happening in the scene that intuitively fits what’s being described. A ring of fire and a molten crown are easy to correlate.

2. Clashing With the Scene’s Atmosphere

Using a metaphor gives you the freedom to break away from what’s literally in the scene and invoke something that’s not. Readers will imagine the subject of your metaphor, and whatever mood it has will be added to the scene.

Unfortunately, some writers focus so hard on finding a metaphor that accurately describes what’s in the scene that they ignore the subjective feeling it provides.

Take this excerpt from City of Bones, in which author Cassandra Clare is trying to create a creepy tone.

Around her neck was a thick silver chain, on which hung a dark red pendant the size of a baby’s fist.

Why is she evoking a baby fist in her dark nightclub scene? Comparing the pendant to an eye would be much better for the tone she wants.

Let’s look at an example from Jonathan Renshaw’s Dawn of Wonder: The Awakening. This is meant as a tense scene where an adult is telling the younger characters to flee.

He was not a timid man, but the worry beneath his words was thicker than flies in a pig pen.

Imagining flies in a pig pen is not helping the tension here.

For a positive comparison, we once again return to Eragon! Paolini introduces some warrior elf riders, and it’s clear he wants them to feel graceful and magical, like Tolkien elves. He uses metaphors appropriate to this purpose.

Three white horses with riders cantered toward the ambush, their heads held high and proud, their coats rippling in the moonlight like liquid silver.

On the first horse was an elf with pointed ears and elegantly slanted eyebrows. His build was slim but strong, like a rapier.

Rippling like liquid silver and being slim but strong like a rapier matches the mood Paolini wants to create.

3. Falling into the Uncanny Valley

Words come with subtle but important associations. The dictionary is unlikely to specify that words like “vibrate” and “assimilate” have mechanical or science fiction connotations, but they still don’t belong in an epic fantasy. Similarly, metaphors can be subtly off, creating an impression that doesn’t quite fit the events that are unfolding.

Going back to the metaphor-rich The City in the Middle of the Night, Anders uses a strange metaphor to describe Sophie’s feelings.

Seeing Bianca depressed makes me feel soft inside, like my bones are chalk.

When people discuss feeling soft inside, they are usually describing feelings that are vaguely located in the gut or chest region. Technically feelings don’t live there either, but internal sensations reflecting emotions, like having butterflies in the stomach or the heart racing, are felt there. Instead, Anders is likening it to fragile bones. It’s head-scratching to imagine Sophie getting crumbly bones when she feels bad.

Another example is this excerpt from Dawn of Wonder. In the book’s opening, a weird thing happens in the forest, and it scares the animals.

For the squirrel, this was warning enough. It fled across the branch, disappearing up the walnut trunk and into a knot hole as if drawn by a string.

Renshaw is using this metaphor to emphasize how the squirrel quickly flees into the knot hole, but the impression it creates is off. Things with legs bound when they run; they do not smoothly glide along like they are being pulled.

For a positive example, let’s look at a metaphor in The Blood of Elves, part of The Witcher book series by Andrzej Sapkowski.

Their horses, decked out in flowing black caparisons, flew over the barricades like spectres.

The horses are not literally flying here, but the comparison is appropriate because they are jumping over something. With their caparisons, which are basically wizard robes for horses, it’s easy to imagine how they might look like spectres.

The first two examples are using metaphors close to the readers’ impression of what was happening, but they don’t quite match. That’s why the images clash, falling into the strange “uncanny valley” space. Sapkowski uses a metaphor that differs significantly from the literal events of the story, but it has enough in common to add something.

Take this humorous example from City of Bones, where a character’s hair color is compared to ink, but the color of that ink is also specified.

She was beautiful, for a human—long hair nearly the precise color of black ink.

Let’s take another example from The City in the Middle of the Night. In this one, Sophie is traveling through a frigid area.

My eyelashes turn solid, like needles, and my lips freeze.

Comparing stiff eyelashes to needles is so on the nose that it doesn’t communicate anything the reader doesn’t already know. It’s possible Anders wanted the needle image for atmosphere, but outward-facing needles don’t convey tactile prickliness, and a visual of needles doesn’t match the icy scene.

In contrast, let’s look at a positive example from City of Bones. This is how Clare describes a mysterious and attractive boy at the club.

He had electric blue dyed hair that stuck up around his head like the tendrils of a startled octopus.

This metaphor adds a lot to the description. Readers might imagine that his hair is in bunches about as thick as a tentacle or that those bunches have a waviness or curve to them. It also makes his hair feel alive.

Storytellers are always looking for quick ways to make their scenes pack more emotional punch. When a scene is falling flat, they can be tempted into using nonliteral literary devices like metaphors to exaggerate what’s happening. This can quickly become melodramatic.

In The Sword of Shannara, this happens after the character Flick sees a scary creature flying overhead.

A sudden feeling of terror raced through Flick’s mind, trapping it in an iron web as it strained to flee the fearful madness penetrating inward.

Calm down, Flick! This situation is a little scary, but it’s not like you’re facing down an elder god. If your mind is trapped in an iron web for a creature that’s not even attacking, how will you top that when the situation is serious?

Take this other example from James Dashner’s The Maze Runner.

He groaned in frustration; his echo amplified through the air, like the haunted moan of death.

Repackaging a groan of frustration into a moan of death is making a mountain out of a molehill.

Metaphors are the most in danger of sounding melodramatic when they represent how a character feels, particularly if the character is scared or upset. Simply focusing on the scary creature instead is a significant improvement. Take this except from H. P. Lovecraft’s short story “The Book.”

The centuried, tottering houses on both sides seemed alive with a fresh and morbid malignity—as if some hitherto closed channel of evil understanding had abruptly been opened.

This may still come off as purple, but it’s better because it focuses on the things that are supposed to be creepy instead of the feelings of the protagonist.

The next step is removing the portions that are telling. Instead of using words like “fear” and “evil,” show why something is scary. Take this other example from Lovecraft’s “The Rats in the Walls.”

My ears gave me the last fading impression of the scurrying; which had retreated still downward, far underneath this deepest of sub-cellars till it seemed as if the whole cliff below were riddled with questing rats.

This makes a strong impression without melodrama.

If you put in a metaphor for the sake of a metaphor, it may not turn out so well. Metaphors should inform readers, create evocative visuals, and enhance the atmosphere of the scene.