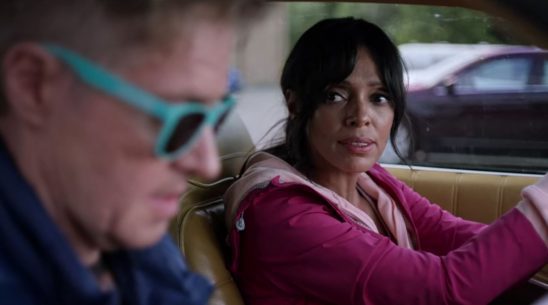 In October Faction, Deloris hilariously asks her husband if he knows how hard it was for the two of them to get their own kids into a good school in Japan. Don't let dialogue exposition like this happen to you.

Among the ever-present need to sound natural but not too natural, the logistics of specifying who said what, and the importance on bringing out characters’ personalities, dialogue can be pretty tough to write. Let’s look at some common mistakes writers make and how we can fix them.

Many writers use dialogue to give information to readers. The problem is that much of the time, that information is already known to every character in the conversation. The result is commonly called “as you and I both know” or “as you know, Bob” dialogue. It’s obviously contrived and distinctly unnatural sounding.

“Out of the question,” Aki answered. “We’ve been at war with the Dark Empire for five years. Their army, which is five times greater than ours, has taken territory from us every summer. The path to the capital is only two leagues from enemy lines.”

Writers can pick up bad habits like these from movies and TV shows, which commonly have this kind of dialogue. But visual mediums do it because they don’t have much choice. If you’re working in a narrated medium, your best option is to take all this exposition out of your dialogue and put it in your narration instead. While you’re doing that, ask yourself what storytelling purpose the exposition serves. If it doesn’t clarify a confusing situation, raise tension, foreshadow, or establish why something matters, you can probably cut it altogether.

However, there will be times when a character doesn’t know essential information and actually has a reason to care about it. In these cases, dialogue can be a great vehicle for information. Just take care so that your character doesn’t sound like a textbook. People aren’t usually interested in memorizing facts and figures. Instead, they’ll want to know the impact the information has on their current situation.

“It’s too risky,” Aki answered. “The road there runs right along the front. As soon as the Empire’s forces gain ground, you’ll be behind enemy lines.”

One of the most important skills in writing dialogue is communicating who said what. I have a full article on labeling dialogue, but most writers aren’t causing confusion by using “she said” wrong. Instead, misattribution is often caused by putting paragraph breaks in the wrong places.

Aki sat down at the table. “I know where the ruby is,” Mia said before gulping her wine. “And I know where we can get it enchanted,” Aki answered.

“But how will we steal it?” Aki said.

She furrowed her brow.

Mia shrugged. “We could hire that jewel thief who got the sapphire for us.” Aki frowned. “Even though he betrayed us,” she said.

The standard rule for spacing is to start a new paragraph when a new person speaks. However, I think that in itself can sound misleading, as some writers think there should be a break between when a new person takes an action and when they speak.

What you actually want to do is group actions and dialogue by the same person into the same paragraph and put paragraph breaks between your coverage of different people. This way, characters always alternate paragraphs, and a character’s body language is presented as an important interaction, just like dialogue. It also creates an easy opportunity to tighten up the dialogue by replacing dialogue tags with character action and body language.

Aki sat down at the table.

“I know where the ruby is,” Mia said before gulping her wine.

“And I know where we can get it enchanted.” Aki furrowed her brow. “But how will we steal it?”

“We could hire that jewel thief who got the sapphire for us” – Aki frowned – “even though he betrayed us.”

This doesn’t mean that you should write paragraphs of unlimited size. If you have a character do an action, then say a line, then do another action, say another line, do another action, etc, then after a while you’ll want to separate that into multiple paragraphs. However, consider what the recipient of this speech is doing all that time. How are they reacting to what they’re hearing? Giving them a brief paragraph with some body language can make the interaction more engaging.

Dialogue isn’t just about making each line sound smooth in isolation; characters must respond to each other in ways that feel realistic. In many manuscripts, the characters don’t quite sound like they’re talking to each other.

Mia looked at the horizon. “Will we ever make it to Eden?”

“Just a little longer,” Aki said. “Once we arrive, I’ll need your help with the locals. I hope you haven’t forgotten your mother’s tongue. They say the people of Eden have been isolated for a long time, and the last expedition didn’t get in. Is there any record of an Eden native leaving?”

“I haven’t forgotten,” Mia said. “The barrier between our worlds is strong, but not strong enough.”

This problem has several different causes, which is probably one of the reasons it’s so common. First, it’s easy to disconnect lines when making revisions. Be careful not to edit a line of dialogue in isolation; read at least several lines above and below to make sure the new line works in context.

Second, this is more likely to happen if your dialogue is too verbose. If you have an entire paragraph of the character saying different things, then that gives other characters more than one statement to respond to. In these cases, arrange the conversation so the response is to the last statement, not a beginning or middle statement. However, it’s also worth asking if the character has a compelling reason to talk for so long. Unless the speaker is on a tirade, trim anything that’s repetitive or unimportant and then split the paragraph up so the other character responds in the middle.

Finally, sometimes this happens because the writer knows more than what’s been stated by the characters and doesn’t realize that. If you’re having problems with disconnected dialogue, looking at your dialogue out of context can help. Paste just the spoken lines into a separate document and remove or change labels. The lines should flow naturally even if you don’t know what people are talking about.

4. Using Too Much Narration

Pacing is important in dialogue. In most conversations, people talk back and forth pretty quickly. When there’s a pause, there’s a reason for that pause. One character might stop to think, or they might be engaged in another activity. But writers often create long pauses by accident and then continue the dialogue as though that pause wasn’t there. This can happen simply by putting too much narration between lines of dialogue.

“Don’t do that.” Mia’s voice was soft, but with a hard edge underneath it that could only mean she had made a decision and would not change her mind.

Aki turned her glass in her hands, the faceted crystal catching the light and splitting it into rainbows that spilled across the table. “Do what?”

“Look at me like that.” They had grown up together and shipped out together when the war first began. Mia probably knew every look Aki had, but still, that was a lot of different looks.

Aki wasn’t going to play any guessing games. “Like what?”

Remember that every word you write causes time in the story to pass. You may not mean it that way, but nonetheless, that’s how the reader experiences it. I do think it helps to explicitly state otherwise. For instance, you might announce that many things happen in a fleeting period. However, that’s a heavy-handed tactic that’s only appropriate for very tense and dramatic moments. Even then, narrating lots of actions or thoughts that supposedly take pace in a single second can stretch believability.

This sensation of passing time means that lots of narration will sabotage the pace of dialogue and distract from the conversation. A big culprit in this category is narration that analyzes the conversation in real time, telling readers what a character really means by dissecting what they say. While it may be worth doing this on occasion, in general it’s to be avoided. Besides ruining the pace of the conversation, it’s telling instead of showing. If you like innuendo, put as much of it as possible in body language and word choice so that readers pick it up without having it explained to them.

Character thoughts can also be a big intrusion, since writers want to convey what’s going on in the characters’ heads during a dialogue exchange. However, in most cases, a character can ponder or angst over the conversation after it happens. While characters are talking, put in the narration you need to support the interaction and no more.

Remarkable things happen during our stories, and to writers these events often represent philosophical ideas or important messages. But sometimes writers are so interested in making their scene dramatic and meaningful that they make characters say things that feel too grand to be natural.

Aki nodded slowly. “Sometimes I think the world we live in is only the shadow of true creation. And that by cloning extinct species, I’m merely playing with shadows while the divine life that cast them remains lost forever.”

“I wish this burden didn’t fall on us,” Mia said as she shrugged off her coat. “But we have no choice but to do this… or watch our world burn.”

Remember that real people don’t spend much of their time pondering abstract concepts like good and evil. Instead, they focus on the particulars of the challenges they’re facing. To get your abstract ideas across, make the particulars of their situation a good example of the concepts. That way, you’ll show rather than tell your important points.

Aki nodded slowly. “We’re almost ready to create our first woolly mammoth. Everyone’s celebrating, but I just… I worry about creating an entire species that exists just to live in a lab. The mammoth evolved for a world that’s gone now, and we can’t give it back to them.”

“I’m sorry – that must be stressful,” Mia said as she shrugged off her coat. “But if we’re going to save all the species that are dying, we’ll need this practice.”

This doesn’t mean it’s never appropriate to put beautiful metaphors in your dialogue, but the timing and context matter. Someone is more likely to say grand things during a speech than they are to their partner at home after work. Even then, important messages and themes are something to build up to. Once the characters have been struggling with the issue for a while, it’s more believable that they’ve thought so deeply about it. By waiting until a climactic moment, these statements will also have added emotional emphasis. Putting philosophy in your first chapter could make readers wonder if you’re more interested in telling them your ideas than building a compelling story.

Dialogue will never be entirely straightforward; it’s simply too complex. But with practice, writers can still learn to polish rough spots and create more engaging scenes.