Of the many books on writing, almost all are for a mainstream audience. Instead of stoking a fantasy writer’s enthusiasm, they can kill it with example after example featuring the humdrum lives of Harry and Sally. Plus, there are some special considerations in spec fic, such as power balance and worldbuilding. That’s why we need genre-specific guidance from time to time.

So if you want to cozy up to genre advice inked on a dead tree, what are your options? For fantasy, it’s pretty much these five. For the sake of brevity I’ve skipped the scifi-only options. If you want me to write a post about those, just click on this article a hundred times a day so it looks like it has a high hit count. Or you could leave me a comment, but that’s too much effort. 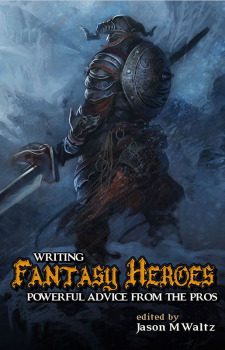 Judging by the title of this book, you’d probably guess it’s about crafting protagonists in a fantasy story. It’s not. It’s about writing Heroic Fantasy, a subgenre that includes Conan the Barbarian.

It’s not a unified piece; it’s a collection of articles by established authors. There’s one piece on showing and telling, a couple on minor characters, and several that wax philosophical on the meaning of heroism. Unfortunately, many of these authors spend more time quoting their own works than they do giving instructions. If you like reading through case studies, they might work for you, but lessons like these are difficult to apply.

The collection also contains a sexist piece* by Alex Bledsoe. In it, he implies that a woman might deserve to be raped. Or, should I say, “ravished.” Pro tip: if you aren’t comfortable using the word “rape,” don’t include rape in your story. Or an attempted rape. Or even the hint of rape.

I’m including the actual paragraph here, so you can decide for yourself how bad it is:

So let’s say your hero comes upon a beautiful girl in a glade, tied to a tree and clearly about to be, as the euphemism goes, ‘ravished.’ The young hero would leap immediately to the lady’s defense, freeing her and battling her would-be ravisher. The veteran, might hang back and take in the situation in more detail, perhaps discovering that the woman, far from being a victim, is merely the bait in a trap. Or, if still held against her will, that perhaps she had done something to merit this treatment.

In the next paragraph, Bledsoe describes how said women – once it’s determined that she’s actually a victim – might pay the hero for saving her by having sex with him. Apparently there’s no happy ending for women in this subgenre; they’ve gotta give their bodies to somebody.

But let’s move on. I’d like to mention a couple valuable pieces in this book. The best one is Paul Kearney’s essay on the logistics of going to war. It’s very insightful, but it’s specific to ancient Rome and Greece, so it may not apply to your work. Brandon Sanderson also has a strong article on writing action scenes, but you can find similar ones online.

And that’s the rub. When all is said and done, this book isn’t any better than random articles on the internet. Not to mention, the internet is convenient and free.

2. The Complete Guide to Writing Fantasy Volume One The Complete Guide… volume one. If it has volumes, doesn’t that imply it isn’t complete? Well, we don’t know if it’s complete because it has no larger structure to finish. Like Writing Fantasy Heroes, it’s a collection of articles by different authors. The subtitle, Alchemy with Words, suggests this volume is specifically on wordcraft.

Nope. In fact, 10 of the 18 pieces are on various aspects of worldbuilding. By comparison, there are two articles on characters and one on plot.

These worldbuilding articles will be the most useful if you are writing in a standard fantasy setting. Most of the articles are Eurocentric, and a couple of them are about food and clothing in medieval Europe. However, they strike a good balance between presenting a wide range of options and describing them in enough detail to be helpful. In addition, many of them are followed by a long list of further reading.

The other articles are also information-rich. The section on wordcraft by Milena Benini covers the basics (as much as she can in a single chapter). She also hits on a number of wordcraft issues that are specific to spec fic and therefore absent from mainstream wordcraft books.

So while this book is a grab bag, if you are writing in a standard fantasy setting, you’ll find it’s worthwhile.

3. The Guide to Writing Fantasy and Science Fiction Follow these six steps, and you too will have a published book about a dragon queen clad in a silver version of the Princess Leia slave outfit, sitting awkwardly next to a guy holding his big shaft.

What? That’s what the cover shows; I can only assume it represents the book accurately.

Except the six steps don’t include any instruction on getting published. They only get as far as refining your manuscript. To cover up that there are, in fact, more than six steps, the book discontinues numbering the instructions in Part III.

But hey, that’s just the marketing. What traditionally published writer hasn’t cringed at the marketing choices of their publisher? So that aside, let’s look closer into the substance of this work.

This book is divided into about 10 pages of intro; 160 pages of advice on writing, storytelling, and worldbuilding; 30 pages on the business aspect of writing; and finally a 20-page analysis of a short story by R.A. Salvatore. In other words, it’s short, and it’s covering a lot of material. How does Athans do it? Unfortunately, he does it mostly by not covering the material.

For instance, under Step One: Storytelling,* is a chapter titled “Learn How to Write.” It instructs you to find other books on writing and read them. You didn’t think The Guide to Writing Fantasy and Science Fiction would tell you how to write, did you? Haha, foolish mortal!

About storytelling in general, the book says:

If you’re a good natural storyteller […] –the craft of writing– is something you can learn by heeding advice from books like this one […] If you’re not a natural storyteller, you’ve got a long, difficult road ahead of you. Teaching writing is relatively easy, but teaching storytelling is close to impossible.

As a storytelling blogger, I’m crying foul. Story construction involves abstract concepts that can be difficult to understand, but it is 100% learnable and therefore teachable. If you don’t think storytelling can be taught, don’t write a book on it.

But this guide includes some instruction, right? Sure. It has lots of assorted advice. Some are good tips for a beginning writer of spec fic. Some – like the mere six pages on plot – might be fun to think about, but probably aren’t useful to you and your writing project.

If assorted tips by a successful author is enough to draw you in, go ahead and buy it. But I was left wondering who and what this skeleton of a book is for. Chances are, you’d be better served by another work.

4. How to Write Science Fiction and Fantasy 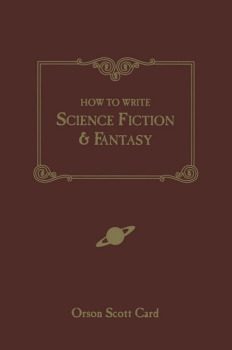 You know a book’s popular when the new version has a cover reminiscent of classic literature. As far as the incredibly niche genre of writing about speculative fiction goes, this book is a classic.

And unfortunately, it’s still the best mass-marketed book on the topic out there. It covers storytelling, worldbuilding, wordcraft, and the business side in only 137 pages. It also does it without telling its audience to go elsewhere for essential information.

Obviously there is a limit to how much it can cover in that space. Each chapter contains only the most useful advice a beginning speculative fiction writer needs. For instance, Card doesn’t try to list all the options writers have for their magic systems. Instead he emphasizes that the options are boundless and you must be clear about whatever you chose.

Card does stumble once by assuming that world creation always comes before story creation. That’s true for some writers, but not others. Even though his process won’t strike home for everyone, his book has a lot more to offer.

For those of you who are social justice warriors,* it’s time to address the flying elephant in our space shuttle. If you know anything about Orson Scott Card’s personal life, you’ll know he does not support equal rights for gay people. I can’t tell you whether it’s okay to buy his book anyway. However, I will say two things:

If you decide to get this book despite (or because of) his personal politics, you’ll find it’s a valuable addition to your library. It’s also a great accompaniment to mainstream writing books. 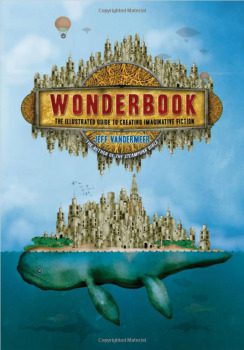 If you’re tired of the same old fantasy clichés, you’ll find Wonderbook incredibly refreshing. It reaches beyond the frame of fantasy and science fiction to discuss speculative fiction writing as a whole.

The format of the book is just as innovative. It’s filled with beautiful illustrations and infographics. There are over a dozen contributing authors with smaller pieces dispersed throughout. Though it has no shortage of text, visual learners will appreciate the time spent on Wonderbook’s design.

The book is about 275 pages long with a 40-page appendix. In those pages it covers storytelling, worldbuilding, and the writing process from inspiration to revision. It doesn’t have a lot to say on wordcraft, but bits and pieces are sprinkled throughout. With more pages on fewer topics, it has significantly more depth than the books by Athans and Card. In addition, it’s larger than a trade paperback, and each page is information dense.

So does that make Wonderbook the winner in speculative fiction instruction? Not quite. It’s a worthwhile book, but its advice is plagued by ineffective use of examples. Storytelling is all about abstract concepts, and this book has those in spades. But these concepts doesn’t exist for themselves; they exist so storytellers can apply them to their own works. Without seeing the concepts in action, it can be difficult to understand how to use them or even what they mean.

This problem won’t bother everyone. You could get a lot out of reading Wonderbook. Or you might find it interesting, then realize it hasn’t made you a better writer.

Sorry guys, but you can’t take a sexist essay and just write “The hero could be a girl, too!” in the intro to fix it.
Yes, the entirety of storytelling is one step. However, it’s divided into five steps- no, stages! The book has only six steps, remember.
Or clerics, bards, paladins, rogues, wizards, sorcerers…