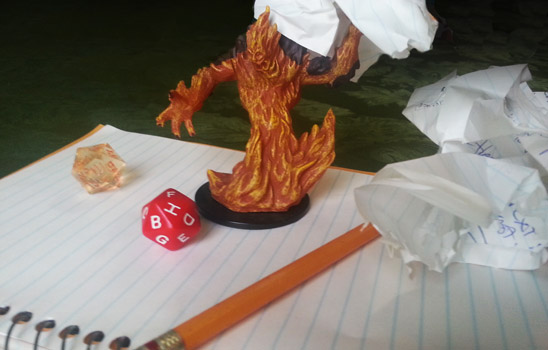 Recently, I wrote about the lessons writers can learn from roleplaying games. Now it’s time to discuss the reverse, because as awesome as roleplaying games are, they can teach writers some pretty bad habits. This is especially true for long-time GMs making their first forays into written work. Some of the instincts that served you well around the gaming table will only serve to trip you up in prose stories.

This doesn’t mean you should stop running games. I would never advocate for that, but it’s important to be aware of any bad habits you might have so you can compensate. Let’s look at five of the most common, shall we?

1. Including Too Much Setting Information

In roleplaying, it pays to create a big world. The more you know about your setting, the easier it is to craft a new adventure every week. And because players are curious, they’ll often ask about elements of the world that aren’t directly related to what’s currently being played. You answer them, and everyone has a fun time filling in the setting’s details.

This leads to the bad habit of over describing your world in fiction, especially if the story takes place in a setting you’ve also run games in. Let’s say you’ve run a long campaign set aboard a space station. As part of that campaign, you established that the station is home to a gang of ruthless gun-runners, plus a nasty camp of anti-upload bigots. Now you want to write a short story about a thief on that station, and it feels incomplete without mentioning the gun-runners and the anti-uploaders. They’re a very important part of the station’s ecosystem, after all.

Unfortunately, by adding in references to setting elements that aren’t directly related to the narrative, you’ve confused your readers. Now they’ll expect the gun-runners and the anti-uploaders to play a major role in the story, because why else would you have mentioned them? In a roleplaying game you could just explain that it’s background info, but that’s impossible in the medium of prose.

So when you’re writing a story, especially a story related to one of your campaigns, pay extra attention to how much of the world you include. Chances are some of it isn’t vital and must be left on the cutting room floor.

Roleplaying games are a collaborative medium. As a GM, you don’t simply lay down the story rails and expect the PCs to blindly follow. Any GM who does that is in for trouble. Players have their own ideas for how the story should go, and you must work with them. If the players are particularly active, sometimes you barely have to plan at all, only react to whatever they do.

This approach will not work in prose writing. It’s possible to know your prose characters so well that they take on a life of their own, but that doesn’t happen automatically like it does with PCs. You’ll need a lot of practice getting to know exactly who your characters are before they achieve that level of agency. If you’ve been GMing for a long time, it’s easy to expect the characters themselves to do that work for you.

If you’re a natural outliner,* this habit may be even worse. For outliners, it’s vital to plan the story far more rigidly than we ever would in a roleplaying game. That’s why we outline, after all. We have to plan what our characters are going to do and make sure it’s consistent with what they’ve done in the past. We can’t count on them to do it for us.

3. Putting Too Much Effort Into Side Characters

In roleplaying games, PCs are simultaneously the protagonists and the audience. As a GM, it’s your job to entertain the players to the best of your abilities, and a prime way to do that is through your NPCs. GMs will often put hours of work into their NPCs, creating backstories, motivations, ways of speaking, the works. This is all in service of making the world come alive for your audience-protagonists of four to six players.

In writing, the audience and the protagonists are separate, and the former derives most of their entertainment from the latter. In a roleplaying game, it’s up to the players to provide their characters with personality and wit. In writing, you have to do that, and most of the audience’s time will be spent observing the main characters rather than controlling them.

If you spend a lot of time and page space developing every side character, there won’t be any room left for the protagonists to shine. If your protagonists can’t be distinguished from anyone else in your world, the audience will quickly lose interest. You don’t want every side character to be a cardboard cutout, but sometimes it’s okay for Farmer Jane to just be Farmer Jane. She doesn’t need lists of characteristics and a page of backstory.

In a worst-case scenario, putting too much effort into a side character can create audience expectations that you never fulfill. If you spend a whole page showcasing all the three-dimensional uniqueness you’ve lavished on Farmer Jane, the reader will probably think Jane is a major figure and expect her to show up later. When she doesn’t, because she’s just a side character, your readers will riot in the streets.

4. Giving Characters Too Much Candy

As with the previous habit, this one emerges from PCs being both protagonist and audience. Most roleplaying games are scenarios of empowerment, and players enjoy acting like badasses. As such, it’s hard to go wrong by making your PCs look good. When in doubt, a good GM will always throw on some extra flair when they describe a PC’s actions. Sometimes this is an essential skill, like when you’re trying to soften the sting of a failed dice roll.

This strategy will not work with characters in a prose story. Your written protagonists also need some candy, but if you give them even half as much as you would a PC, your readers will roll their eyes in exasperation. Because the reader is not directly controlling the character, the reader won’t feel the same empowerment a player would. If anything, the reader will lose any connection they do feel to the character. The character will become an obviously fictional paragon, far beyond the likes of mere mortals, that is very difficult to identify with.

Prose protagonists need to eat a lot more spinach to earn their candy. They must be shown failing, looking silly, or doubting their own abilities. Exactly the sorts of things a GM will usually try to avoid for their PCs because a lot of players won’t enjoy them.

5. Not Making the Climax a Turning Point

This habit has nothing to do with players or their characters and everything to do with the mechanics of roleplaying games. In most systems, harder tasks are given higher difficulties, be they a single roll or an extended combat. Passing those high difficulties is often the cause for great fun and excitement. We all have stories of that one time we defeated a powerful boss single-handedly or delivered a speech so good it swayed the elven parliament in our favor.

With this dynamic, it’s no surprise that GMs often use higher difficulties to signal a story’s climax. Players usually respond well to this tactic, gathering every bonus they have available and spending large quantities of meta currency. Triumphing over such adversity is often the only pay off, and for roleplaying games, that can be all you need.

But prose stories are different. In a prose story, the climax must be a turning point. Something must change, preferably something about the protagonist to complete their emotional arc. They can’t simply triumph over evil; they must discover their true feelings while triumphing over evil.

If most of your experience is with roleplaying games, it’s easy to lose sight of that all-important turning point. You’re focused on describing an epic finale with lots of action-packed description, and that’s always been enough in your campaigns. But if you rely exclusively on your old GMing tricks for a prose climax, your story will be devoid of any pay off, and readers will feel like they’ve wasted their time.

None of this is to say you should stop running roleplaying games when you start writing. Roleplaying games can be beneficial to your writing, and they’re fun in their own right. Instead, be aware that not every habit you learn from GMing will help you with the written word. Once you can distinguish the difference, your two storytelling mediums won’t come into conflict again.